Why Cheap Cars are Expensive

Cheap cars can cost more than a BMW by the time you get rid of it. However, when the budget is small and the need for transportation is large you might have to buy a cheap car.

In this article we'll outline why inexpensive rides are often expensive in the long run. Since we cater to the old car demographic here at fix my old ride we'll weave in things for you to look for throughout this story.

Don't hand over the cash on a low priced car without properly inspecting it first. Since there is no shortage of cheap cars on the market there's no reason why you shouldn't try to find the best one in the bunch.

Let me clarify this a little further. If you buy a car for $900 there's going to be stuff wrong with it.

If those items are minor and you're prepared to address them you'll be in better shape than if the car has major issues or an unsolvable problem. 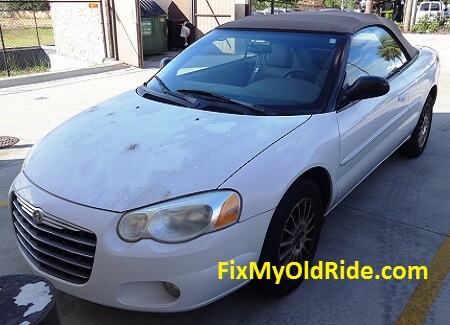 A neighbor let me use a picture of their 2004 Chrysler Sebring convertible in the hope that others would learn from their experience. You can see from the image above this doesn't look like a bad car.

When their daughter got her driver’s license they found the need to become a two-car family. With a low budget and a high list of demands this rag top Chrysler seemed like a perfect fit. By the way I don't recommend a convertible as a first car.

When you cut away the roof you remove a lot of the structural integrity of the automobile. Manufacturers compensate by adding additional bracing to the frame. I would rather have the strength provided by a full roof.

This 15-year-old high mileage car came in under budget at $1800. They let me have a look at it after the sale was finalized. 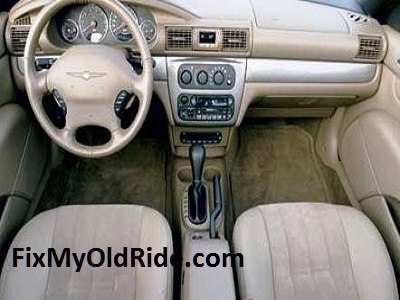 When I opened the door a familiar moldy smell hit me in the face. This is one of many cheap cars that had a lot of water inside at one point.

Although the title didn't show a flood totaled car, there's no disputing that water damage would be an issue.

It's possible that someone left the top down in a heavy rainstorm which is also common with the convertible automobile.

If you look closely, you can see faint water marks on the freshly cleaned interior trim panels on the passenger side floor.

Although the water would be an issue down the road there would be other problems fighting for attention before dealing with wiring, connector corrosion at the car's computer and other water damage issues. Did I mention this car smelled really bad inside?

For the first two days everything seemed good, but on the third day a giant puddle of oil showed up in the driveway.

I still see this stain every day when I go out to my car. Oil leaking from the Sebring is somewhat of a known problem with the 2.7 L Chrysler engine.

This car with this engine is known for oil leaks from the oil pressure switch pictured on the left. In addition, leakage around the cam sensor (below) is also common. Both of these are really considered minor problems.

Upon further inspection, we found the engine completely soaked with oil. Therefore, we had to steam clean it before we could actually diagnose it properly.

This car would need so much work the family didn't want to buy a bunch of parts it didn't need.

After rechecking the 2.7 L I did confirm a good size leak from the oil pressure switch and the cam sensor seal.

Next it was time to replace the items and perform another good cleaning with some engine cleaner and a garden hose. After everything was bone dry we started and ran the engine.

Things looked good and I thought we got lucky with some inexpensive repairs. However, the celebration would be short-term.

A small leak continued and unfortunately, it turned out the rear main crankshaft seal leaked.

The family decided to add a double shot of stop leak and put cardboard under the car every night.

They couldn't address a rear main seal issue on this automobile, because new problems kept popping up every day.

If you look at the original picture at the top of this article you'll see that the front wheels are completely caked with brake dust.

The cool looking black wheels are actually bright silver from the factory. Although brake dust on the wheels is a normal condition it's also a sign that you should perform a brake inspection.

The dust is made up of worn friction material which again is a naturally occurring condition. But this car had metal to metal brakes.

You could shine a flashlight through the wheels and see deep grooves in the rotors. Since this is a safety concern, we did a brake job with new rotors.

Unfortunately, the calipers also need replacing, because they overheated and started to bind causing a brake pull.

After performing the brake job I took the vehicle for a ride and noticed that the steering wheel wobbled left to right at slow speeds.

This is usually a tell tale sign of a bent rim. We took the vehicle over to a Firestone to get the tires balanced and found there was not a bent rim.

But in fact, someone filled it up with tire stop leak. Although tread remained on this tire it needed replacing.

If your keeping track, stop leak found its way into three separate systems. All the owners wanted to keep pouring stop leak into this old car.

This Cheap Car was Expensive

The family purchased this Chrysler Sebring convertible, because of a limited budget. I could probably write about 100 pages of the things we found wrong with the automobile.

I didn't even mention that the AC didn't work and the seller overfilled the air conditioning system with Freon stop leak.

So after finding out that this Chrysler car needed an evaporator core replacement we didn't tackle it. Because it also needed a compressor, condenser, receiver dryer and a thermostatic expansion valve.

The bottom line is that a professional used car inspection before the purchase would have uncovered a lot of the issues that developed within the first week of ownership.

In the end, it would be the first problem I mentioned at the beginning of this article that would mean the end of the line for this family's relationship with this Chrysler Sebring convertible.

The car smelled bad inside and it was hard to spend any time in it with no AC. They would have found it necessary to replace the carpet and the padding underneath it to eliminate the odor.

The decision not to do it became an easy one, because of all of the other issues uncovered in the weeks and months to follow, but not discussed in this brief article.

Fortunately, for the young driver and the family, this story has a happy ending. They upgraded this ride using logic and data instead of impulse.

She got herself a part-time job and could afford a small car payment every month. After working hard she saved up for a down payment and traded the Chrysler against a reliable used automobile.

This time the family took me along to check the vehicle. We got a second chance at finding the right first car for a new driver.