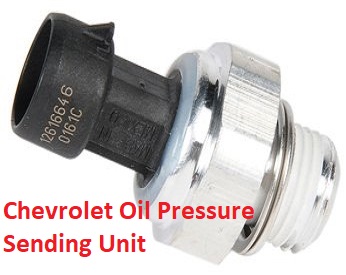 The Chevy engine oil pressure sensor problem has been going on for a long time. With that said, the vehicles with the most pressure switch problems fall in the range of V-8 engines from 2003 through 2012. At some point in the model year of 2007, Chevrolet realized an issue existed.

They decided to place a filter screen around the Chevrolet engine oil pressure sensor. They did this because they believed sludge and debris found its way into the sensor. Not only did this not fix the problem, it created another. Now sometimes when you pull the protective filter screen out, you find it completely clogged.

This means if you replace the oil pressure sensor, because you think it's bad and you do not replace the filter screen around it, the same problem reoccurs. Since the part isn't easy to replace you really want to get it right the first time. Unfortunately, people usually read the first paragraph of these articles and just replace the first part mentioned.

I'm asking you to hang in there with me and read through this entire page. Not only will I provide tips to help with the replacement of this unreliable Chevy engine oil pressure sensor, but we'll talk about a lot of the problems associated with this repair and the common computer and sensor codes set. Finally, we include pictures of exactly where the part is located.

The first time I ran across the Chevy engine oil pressure problem the customer complained about an oil gauge that read zero and a check engine light. Obviously the motor was getting oil pressure, because there wasn't any noise.

After connecting a scan tool I found a code P0521 and trouble code P0523. These codes stand for engine oil pressure sensor switch performance out of range and sensor high-voltage. Note that it's also common to find a P0520, standing for oil pressure sensor circuit malfunction and P0522 circuit voltage low.

Also worth mentioning, a warning message on the dash stated low oil, turn engine off. This warning went unheeded by my customer, but you should always follow the instructions just in case. I’ve seen General Motors pressure gauges and warning lights malfunctioning since I first got in the business in 1984.

Standard diagnosis procedures remain the same. The way to find out what's wrong with the automobile is to remove the oil pressure sensor or switch and connect a mechanical gauge. This way you're reading the mechanical engine oil pump pressure and not trusting the electronics that report this reading.

Although I still believe in this method of diagnosis, most people don't have a mechanical oil pressure gauge. However, if you have a Chevy V-8 engine between the model years of 2003 through 2012 it's probably safe to bypass the standard diagnostic procedure. After dealing with this problem I have found nothing but a malfunction of the Chevy engine oil pressure sending unit. 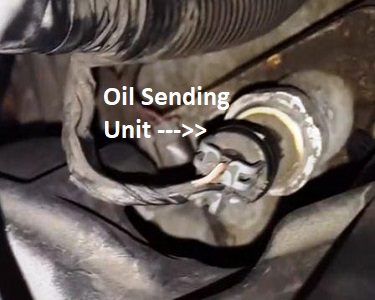 The location of the oil pressure sender remains an issue for most do-it-yourself mechanics. As you can see from the picture it is a tight fit. They locate it in front of the transmission bell housing where it bolts to the motor.

I hate to tell you to buy a special tool that you'll only use one time. However, in this situation I'm recommending that you get the special tool designed to remove the pressure switch. The special socket has an extra thin wall that allows you to get it over the sensor easily.

A standard 1 1/16th deep socket doesn't fit tight enough on the factory installed part. And my 27 mm deep impact socket was too thick to fit over the sensor. Chances are, if you own this vehicle long enough, you might get to use the special tool a few more times. Repeat failures of the sensor are common and we'll talk about this in the problems section below.

With that said, the first step is to remove the plastic cover over the top of the engine. Surprisingly, even this is a fight. The front of the cover just lifts off of two retaining posts. However, the back of it gets hooked on the rear retaining clips, because it doesn't have enough clearance above.

You'll have to stick your hand in there and push down on the rear retainer while lifting up on the back side of the engine cover. The next step becomes to disconnect the electrical connector. They use a lock tab to hold it in place. You simply pull the white lock tab up and it will snap to release. Then you can depress the connector lock and wiggled it loose from the sensor.

As for replacing the sensor it screws in the rear portion of the engine block into an oil gallery. A six-inch extension attached to a swivel head 3/8 ratchet works perfectly for removing the Chevy engine oil pressure sending unit. Here is a three minute video that sums up the replacement procedure quite nicely.

The main problem when replacing the Chevy engine oil pressure sensor is repeat failure. This goes back to the root cause of the issue. Sludge and debris finds its way inside of the old oil pressure switch.

This is when Chevy decided to install the filter screen for the 2007 model year. Now what happens is the screen becomes plugged with junk and engine oil never reaches the sensor.

Therefore, people that just replace the part without replacing the screen find the repairs won't last long or don't work at all. This also leads to confusion that there is something else wrong with the automobile.

On older Chevy engines that don't have the screen repeat failure often comes from lack of engine maintenance. In some cases this is not the fault of the current owner, but the previous one. A lack of engine oil changes can cause sludge deposits to form.

These can break loose and find their way into the input port of the replacement pressure sensor. If you have one make sure you replace the screen along with the switch.

You will need a small pick to fish it out of the oil gallery in the engine block. When you thread in the sensor it holds the new screen in place. With the low cost of the replacement part it doesn't seem like a good idea to clean the old screen. In the next section I'll talk briefly about other issues I've found when trying to cut corners on this repair.

Whenever you have car parts that fail in large numbers the aftermarket steps up to make cheaper solutions. They start mass-producing replacement parts and offering them at lower prices.

Unfortunately, I have seen several issues with these ultra cheap replacement Chevy engine oil pressure sensors. I've had a couple of them not work right out of the box. And this is not because of the problems mentioned above in the repeat failure section.

With that said, let me tell you about the worst-case scenario that I ran into. After replacing the oil pressure sending unit with a part that cost $15, a disaster happened when I started the engine.

The plastic center blew out of the part. When that happens the oil pressure gallery becomes open to the atmosphere. The amount of oil that sprays all over the engine compartment in such a short period of time will amaze you.

The cleanup involved on both the vehicle and the work area added a few more hours to this disaster. For this reason, if a customer wants me to replace the Chevy engine oil pressure sending unit I only use a Delco part. However, I won't get this part from the dealership, because they want almost $100 for it. And while I'm on the subject of dealerships, when I priced this operation I got sticker shock.

The local Chevy dealership in my town quoted me a price of parts and labor of $500 to replace the oil sending unit. With the amount of money you can save by doing it yourself, you can afford to get a good replacement part, a new screen and the special tool that makes it easier to replace and still save.

The search results open in a convenient overlay. However, the pages from This Website are listed below 4 ads at the top.