The Ford Focus engine vibration problem can drive you crazy. Even the people that are good at ignoring car problems will find this one impossible to overlook.

The root cause of the issue stems from a failure of the factory installed engine mounts. As I performed a few of these replacements I’ve seen motor mount failure on mostly the first and second generation Ford Focus coupes, sedans and wagons.

The interesting thing about these cars is the variety of available engine and transmission combinations. The most common engine you'll find under the hood remains the 2.0 L four-cylinder single cam motor. However, in 2002 they launched an RS model with a 2.0 liter turbocharged Zetec engine.

In 2005 the Ford Focus had an MK II option power plant with extremely impressive performance numbers. The 2.5 L turbocharged engine, borrowed from the Volvo lineup, pumped out 225 horsepower. It could push the car from 0 to 60 in around six seconds. 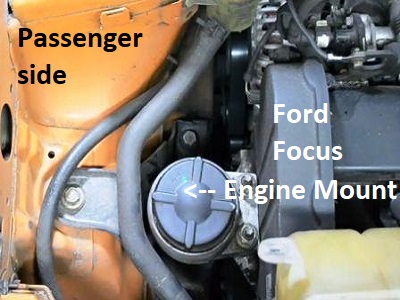 With that said, the Ford Focus engine vibration problem caused by a collapsed or failed motor mount remains a common issue on all of the possible power train options.

Even though you might have a bad engine mount you need to verify the part number against your year, engine size, transmission and specific model.

In this article, we'll talk about the use of aftermarket replacement parts compared to buying a Ford factory part from your local Ford dealer parts department. In addition, we'll cover the most common symptoms that drivers complain about when they experience motor mount problems.

The interesting thing about the Ford Focus engine vibration problem is the slow onset of the symptoms. They literally creep up on you so slowly that it may take some time for you to actually realize that something’s wrong or at least not normal.

With that said, when I had a customer show up with a 2004 Focus ST model complaining about a rough running engine, the symptom that caught my attention became the loose coins dancing in the ashtray.

This car vibrated so badly that the customer's loose change, stored in the ashtray, rattled something fierce. The other symptoms of the vibration included a gas pedal vibration so bad that it eventually puts your foot to sleep.

The vibration in the steering wheel was also quite impressive. Just one more thing to mention about the symptoms. The driver said, the engine ran rough, but that wasn't the case.

The engine on this car ran perfectly, not missing a beat. However, you could feel every single combustion stroke throughout the automobile. Let’s call it a harmonic vibration that rang through the entire sheet metal of the automobile.

The engine mounts on this car collapsed. What I mean is the rubber designed to insulate the engine vibration from the rest of the automobile no longer functioned as intended. I wanted to make a point about this, because I have seen a lot of broken engine mounts. 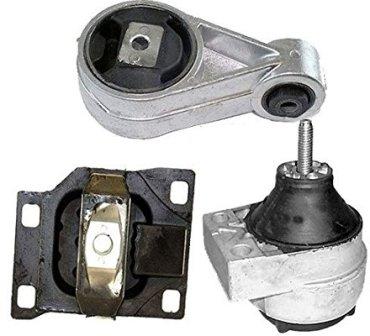 In fact, I just wrote an article about broken engine mounts on a Chevrolet Blazer. It's the same exact problem, but with extremely different symptoms.

The Chevrolet product made a bang, thump and clunk noise when shifting gears. The Ford Focus had a horrendous vibration all the time when the engine mounts failed. This is the difference between a collapsed and broken motor mount.

With that said, when I shifted the Focus from park to drive and then from drive to reverse the amount of vibration also changed.

Upon further inspection I could see the rubber collapsed to the point where both the engine and transmission mounts made direct contact with the sheet metal. In the next section we'll talk about why you might consider replacing all three rubber mounts at the same time.

There’s no question that the front engine mount located on the passenger side of the engine compartment is the one causing the most vibration. It’s also one of the easier motor mounts to replace. They locate the transmission mount underneath of the air box and the battery tray so you can't even see it.

There’s an additional transmission mount, called a dog bone style dampener, underneath the automobile. For this reason many people just go ahead and replace the one they can see when they pop the hood. When you replace the one front engine mount you’ll notice a decrease in the Ford Focus engine vibration problem.

However, if the other two mounts remain worn out in the same way as the engine mount the longevity of your work becomes greatly reduced. In other words, replacing all three at the same time can stop, repeat failure of the front motor mount. Fortunately, many driveway warriors posted videos on exactly how to replace the Focus engine and transmission mounts.

Before we talk about which parts are right for your Ford, let me make an important statement about all of the parts. Since we’re talking about an automobile that could be anywhere from the 1998 model year all the way through 2007, let’s talk about how these parts are different throughout the years.

We certainly had different part numbers for the first generation cars as compared to the second generation ones launched in late 2004.

In addition, some of the high performance models like the ST and the RS use turbocharged engines that also carry different part numbers than their regular single cam four-cylinder engine counterparts. In other words, make sure that you are getting the right replacement parts, whether you choose aftermarket or factory.

I always give my customers the choice on which route they should take. The Ford parts are much more expensive, but have a better reputation. However, I want to dive into this a little bit more in the next section. 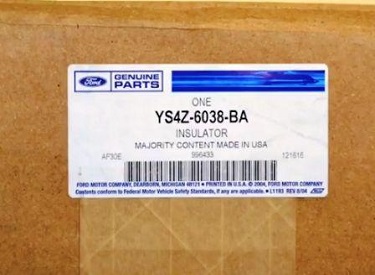 The aftermarket motor mounts that solve the Ford Focus engine vibration problem have a bad reputation. This remains something I haven't experienced myself.

With that said, I always opt for replacing all three mounts at the same time. My point becomes that complaints about the aftermarket components might have something to do with replacing one engine mount at a time.

When you replace a single engine or transmission mount it now must carry the load for the other two failed components. This can cause premature failure of the part you just replaced. Another thing to mention is why I started using aftermarket replacement parts for this operation. 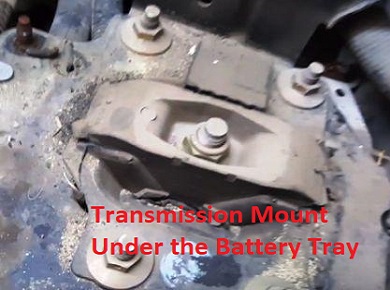 As the Ford Focus engine vibration problem became widespread, my local dealership told me the parts were back ordered. In fact, it could be months before I would receive them.

Strangely enough, the price also started to go up at the same time.This led me to give the aftermarket engine mount kit a try. I'm happy to report, that a year down the road and there's no issue with the parts I installed. However, your results may vary.

In the end, replacing the engine and transmission mounts to solve the Ford Focus vibration problem becomes more important than just saving your sanity while driving this automobile.

The car vibrates so violently that everything in the car is subjected to a harmonic vibration. This situation can cause additional problems.

I've seen loose connections and bolts physically backed out because of the intense vibration. We filed this article in the miscellaneous car repair section.

There you can see additional articles about car problems that don't actually fit in a popular category. If you're interested to learn more about the fix my old ride website then visit the home page and see what we're all about.