I'll provide you with the answer to the Infiniti Q Versus the Red Sport Edition question right now. Hopefully, you'll stick around as we dive into each category covering the engine, drivetrain and the interior differences between the two models.

So, should I get the Red Sport or the standard Q sedan or coupe? At the root of the question, Infiniti Q versus red sport edition, we first have to consider the Red Sport automobile costs $13k-$15,000 more.

The exact number depends on location and selected options. With that said, the question of whether this is worth it depends on your plans for the vehicle. If you're a motorsport fan that likes to tinker and bolt on performance parts you're better off with the standard Infiniti Q series automobiles.

However, if warranty coverage and speed at a convenience remains most important, than you're looking for the Red Sport, even if it does cost $15,000 more. Some people just want to get in and drive while enjoying maximum performance available immediately. Some people want to tinker and tune their way through the vehicle lifecycle.

Here's where the payoff is for doing things yourself. You can increase the performance of a standard Q well past the performance specifications set by the red sport edition off the factory floor.

In addition, you could probably do so for less money than the 13k to $15K in price difference. Here's why I say probably. We'll dive into this further in the engine performance section of the Infiniti Q versus the red sport edition article.

With that said, you as the buyer of a standard Infiniti Q can reap the benefits of those who came before you in their search for higher performance. They sell more standard Q cars. This means more videos and support showing you exactly how to achieve 500 hp.

However, if you ever need warranty service you'll need to remove all of your fancy aftermarket high-performance parts before rolling the car into the dealership. This is when the extra money seems like a very smart move in the purchase of a Red Sport edition Infiniti Q series sports car.

The 400 base hp of the Red Sport is nothing to sneeze at. It's a full 100 hp above the standard edition off the factory floor. Plus the sport model has a limited slip rear differential with a performance oriented gear ratio.

The extra horsepower, factory computer tune and drivetrain makes this car wickedly fast. And it's covered under warranty for six years 70,000 miles. This is very important, because the Infiniti Q series had some big warranty problems. Maybe more of these kinds of issues are waiting to happen? In other words don't think you won't need the warranty at some point. 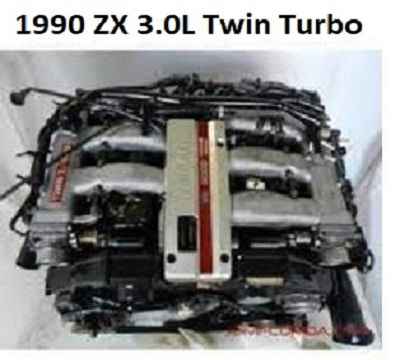 I really love this power plant. Let me start out with a little history and some rumors surrounding the launch in the early 90s. Yes, for nearly 35 years the 3.0L DOHC V6 twin turbo dominated in the base horsepower category for V6 engines. They slid this motor into the 300 Fairlady Z in 1989 for the first time and cranked out 300 hp at 6,400 RPM.

Thirty something years later this engine still produces 300 hp at 6,400 RPM. However, it's now all aluminum including the cylinder heads. This provides an improved power to weight ratio. Here's a part of the story that many consider rumor and some consider fact. I can only tell you the tale as I heard it more than 30 years ago.

The story comes from whiteboard sessions at Nissan's engineering division headquartered in Yokohama, Kanagawa, Japan. The engineers tweaked the designs on the 3.0L v6 platform that Z performance automobiles used for years.

At one point in the whiteboard design session, an engineer got up from his chair, walked over to the whiteboard and wrote Corvette killer at the top of the board. Whether this was true or not we may never know. With that said, in 1990 the 300 hp twin turbo Nissan ZX could certainly bring down a Corvette. Not much of a feat at the time as the Corvette pushed a measly 245 hp and weighed more than the Z in 1990.

It takes a lot of digging to find out the difference between the 400 hp Red Sport engine and the 300 hp Standard Edition Infiniti Q series motor. In the interest of saving time let's talk about how they squeeze the extra hundred horses out of the 3 L twin turbo engine. They get most of this increase by assuring they achieve maximum boost pressure. They take it right to the edge.

They do this by removing the standard eddy turbo speed sensors and replace them with optical sensors. The difference in these two technologies is major. However, they do exactly the same thing in measuring rotational speeds. As you can imagine the optical sensors must perform better or more accurate to deploy this technology in just Red Sport engines.

When they add an optical sensor to the turbo case they also have to add an LED light. The optical sensor counts the number of flashes of light to determine compressor speed. As the turbo fan rotates it blocks the LED light for a moment causing a countable pattern. Also note that the signal generated is considered analog and must be converted to digital for the computer to understand.

In addition, another major factor becomes removing more heat from the pressurized air as it enters the engine. The inter coolers are quite small. The Red Sport adds additional cooling capabilities by adding an additional water pump. This ups the efficiency of the small inter coolers. And this remains one of the most popular areas to upgrade on the standard Infiniti Q series sports cars.

Aftermarket companies developed larger inter coolers and increased cooling capacity to bring down the temperature of the intake charge. Adding additional coolant reservoirs, improving down pipe efficiency and larger surface area to the inter coolers can make a huge difference in the performance of the standard Q. However, these are the things that require removal every time the vehicle needs warranty service.

The Drivetrain and Steering on the Red Sport

Of course the additional horsepower described in great detail above goes a long way in explaining the difference between the Infiniti Q and the Red Sport edition. With that said, they take that additional horsepower and multiply its effectiveness by installing a lower gear ratio rear differential.

Not only does the differential use a more aggressive gear ratio it's also of the limited slip variety. This helps the Red Sport gain traction and accelerate faster. When you drive the two different automobiles (which I recommend you do) the taller gear ratio in the Standard edition becomes unmistakable. If you have plans to use the vehicle for long commutes on the interstate highway system I would much rather have the taller gears.

However, if you plan to use the vehicle for spirited driving on twisting turning roads than the performance rear differential remains highly coveted. We have another included option to discuss in the red sport package. DAS stands for direct adaptive steering. In a nutshell, the computer gets involved in the steering of the automobile. Most owners adapt to the unusual feeling of a changing steering ratio.

However, this is not something that suits my personal taste. I've been driving my automobile my whole life and wish to continue to do so without interference from the computer. Note that the DAS system becomes an option on the standard Infiniti Q series sports cars.

In other words, you don't need a red sport to get DAS. A good rule of thumb to figure out whether your Q has direct adaptive steering refers back to the cruise control. If you have adaptive cruise control that comes with the tech package you probably have DAS.

The interior and exterior differences between the standard Q and the Red Sport are subtle yet noticeable. The addition of a rear spoiler, different front and rear bumpers and steering wheel mounted paddle shifters provide an elevated look and feel. The chrome on the front grill of the Standard Edition gives it a more elegant look in my opinion.

The red sport edition ops for a blacked out grill and fog light moldings. This look is very popular right now. Interior seating becomes another huge difference between the two models. The seats in the Standard Edition are uninspired and mildly comfortable. The seating in the Red Sport edition is exactly the opposite of that.

The seats look aggressive and hold you firmly in place. I've seen three different interior color schemes, but there might be additional available for this model year. I've seen white, red and gray. I like them all, but I recommend you head into your local Infiniti dealer and actually sit in the vehicle to see just how different the interior is on the Red Sport edition.

If you like Infiniti cars and sport utility vehicles take a look at the 5 most common maintenance items on these types of automobiles. Not ready for a newer car? Maybe you're ready to upgrade your old ride? See the Home page here.