The Jeep serpentine belt problem is nothing new to Jeep owners. With that said, the word still hasn't gotten around that you don't have to live with a noisy serpentine belt on your Jeep product.

This particular article addresses one of the biggest offenders when it comes to noisy engine belts.

That's right, we’re talking about the 4.0 L six-cylinder engine found in Jeep vehicles from 1996 through 2006.

They dropped this solid engine into millions of vehicles, including the popular Jeep Cherokee, Grand Cherokee as well as the Jeep Wrangler and Comanche.

Here's an interesting bit of trivia about this engine. The original Jeep straight six designs originate from the 1964 AMC product line.

Throughout the years they increased the displacement and improved power output. I've seen these engines with more than 300,000 miles on them.

With that said, certain years required a lot of maintenance and repairs to make it that far. 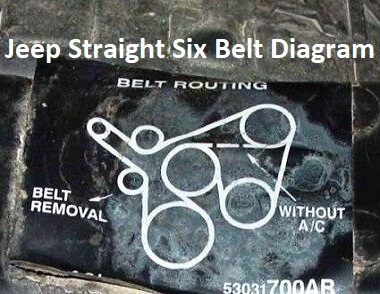 This brings us full circle. The four liter straight six engines can last a long time, but the Jeep serpentine belt problem can drive you crazy throughout the ownership cycle.

Here we'll talk about the three main components at the root cause of the issue. These include the serpentine belt tensioner, the idler pulley and the serpentine drive belt itself.

The belt tensioner uses a heavy spring to apply just the right amount of tension to the drive belt.

In addition, this part has a sealed bearing pulley. The composite construction of this device allows it to fail in many different ways.

The manufacturers often use belt tensioner's made in China with questionable quality. The Chevrolet belt tensioner is no better than the one they use on the Jeep products.

I have personally seen belt noise caused by both failure of the sealed bearing pulley and the separation of the tensioner body.

That's right, these single parts are made up of four separate components. You have the giant spring, the base that mounts to the engine and the swing arm that attaches to the pulley. 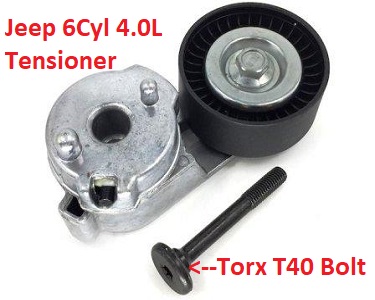 Since any of these components can fail at any time it's recommended to source a complete assembly.

Fortunately, with the huge demand for replacement parts, aftermarket companies offer the replacement tensioner for less than $40.

Even at this bargain price the quality is usually on par with the one the factory installed on the assembly line.

The problem with replacing this Jeep serpentine belt tensioner becomes the method they use to attach it to the engine block.

Jeep uses a single Torx head bolt with a large diameter flat head. It's this one bolt that makes this not the perfect do-it-yourself auto repair.

The size of the bolt is a Torx 40. However, the problem remains that it fits a little loose and in many cases it strips out when you try to back the bolt out.

After doing the repairs several times I came up with a trick that reduces the chances of stripping out the center of the T-40 retaining bolt.

While I am moving my ratchet counterclockwise, I use my other hand to operate a pair of channel locks clamped onto the outer edge in the same direction.

Once you get a quarter turn in the right direction you can remove the channel lock pliers.

Since this is one of those operations where a picture is worth 1,000 words, here’s a link to a gentleman using the same technique in a YouTube video.

In a worst-case scenario, if you need to buy a replacement bolt you can get them at your local Jeep dealer. Here’s the Jeep belt tensioner T 40 bolt part number 6507743AA.

Although I see the failure of the spring-loaded belt tensioner at the root cause of engine drive belt problems on Jeep products, it's not the only thing I see.

More than once I have found a completely destroyed belt. This is almost always caused by a seized idler pulley.

In addition, sometimes I can physically move the pulley from side to side. This part shouldn't have any play in it. In other cases I can hear a squeaking sound as it rotates.

With the cost of a replacement part in the $10 range it only makes sense to go ahead and replace it at the same time as the tensioner.

The last thing to talk about is the quality of the rubber serpentine belt. Often automotive parts suppliers will offer a replacement engine drive belt that they will make the most profit on.

Although I don't want to call out any individual brands, you can probably guess which one I'm talking about. When automotive parts companies by rubber replacement belts from China in massive quantities, they pay very little per unit.

Even if they sell them at a discounted retail price, they still make a lot of money per belt.

The question is how long will this part last and how noisy will it become during regular operation. I was always a big fan of the Goodyear Gatorback engine drive belts. You can still find these in many locations.

However, my backup go to belt is from another tire company. If you think about it, who is better at supplying quality rubber replacement parts than a company that already has ample rubber supplies.

Therefore, I like the Continental brand of engine belts for the Jeep four liter straight 6 Engine drive belt application.

They re-branded these serpentine belts as Contech brand parts. Often when a Jeep owner is complaining about a squeaky belt it needs nothing more than switching out the current drive belt with a high quality replacement.

There's one more issue that can cause major belt noise on these rides. However, it's most common on Jeep Cherokee and Grand Cherokee units. The crankshaft pulley starts coming apart after about 10 years and 100,000 miles of use.

We filed this Jeep serpentine belt problem article in the miscellaneous car repair problems section of the fix my old ride.com website. You can head over to that area and review some other hard to categorize auto repair problems.