The Chevy Cruze coolant leak is a problem on the rise. You're starting to see lots of customers complain about problems and symptoms stemming from a low coolant situation.

The problem stretches back to the 2010 Chevy Cruze models and we've seen them on the 2016 models as well.

The most common engine you find in these automobiles remains the 1.8 L four-cylinder engine dubbed the Eco-Tec.

However, some of these automobiles came through with the 1.6L or even the 1.4 L turbo engine.

Although a coolant leak from the thermostat housing remains the most common issue, additional problems can cause a coolant leak and a check engine light.

Here we'll discuss the most common symptoms, failed parts and repair procedures. Be sure to read the final thoughts section.

I'll express some of my personal opinions about this poor design and how long it might take the company to realize people need help with this issue.

Update: There’s an additional area leaking coolant on the Chevrolet Cruze. We provide more information about it at the end of the article.

With that said, while you're addressing the leak from the thermostat housing you should be aware of this common problem area.

Hint: You might find antifreeze leaking from the recovery tank hose and the throttle body heater inlet pipe on 1.8L engines. 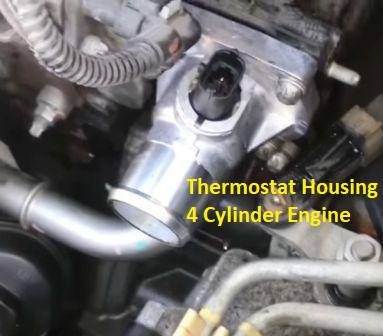 When the thermostat starts to leak it begins slowly. The small droplets evaporate on the hot engine. Therefore, the absence of the most common telltale sign of a coolant leak occurs.

When you have a coolant leak we usually see antifreeze underneath the automobile when you leave the parking space.

Unfortunately, if it leaks slowly enough you won't see any wetness under these Chevrolet Cruze models.

Therefore, one of the first complaints that you'll hear from drivers is an odd gurgling sound. This is a direct symptom of a low coolant system.

As the driver continues to lose coolant they might find intermittent heat operation on their Chevrolet Cruze. When the system becomes depleted enough drivers complain of no heat at all.

Finally, the temperature sensor mounted at the top of the thermostat connects to the vehicle computer input sensor network. Some of these automobiles set a code P0597 through P0599.

These codes stand for communication errors between the temperature sensor and the vehicle's main computer. This is the black, two wire sensor you see on the top side of the thermostat housing.

However, I have seen this check engine light issue enough to just go ahead and replace the thermostat housing assembly on the Chevrolet Cruz and Chevrolet Sonic models.

Of course, this is with the popular 1.8 L four-cylinder engines. This includes the Turbo charged models that you find in some Sonic and Turbo Cruze models.

Repair the Coolant Leak on a Chevy Cruze 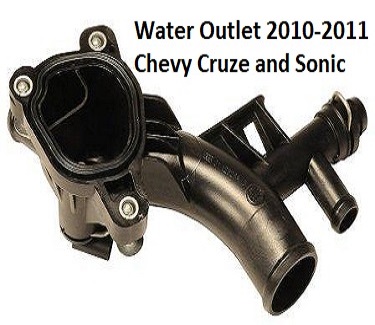 If you take the easy way out and go for a dealership service department repair, this operation costs in the $500 range. A do-it-yourself repair brings these expenses down to the $100 range.

With that said, if your Chevrolet Cruze is out of warranty, it may be worth a call to Chevrolet customer assistance.

No guarantees here, but they can provide a goodwill adjustment for known problems if you're only out of the warranty window by a small amount of miles or time.

Now let's talk about doing the repairs. The older Chevrolet Cruz models from 2010 and 2011 have a plastic water outlet assembly.

This becomes a completely different part number than the newer models from 2012 through 2015. Therefore, when purchasing these parts make sure they double check the year and the engine size.

On the older models you'll be replacing a one-piece plastic assembly. With the newer Chevrolet Cruz models the thermostat housing itself is made out of aluminum.

This bolts to a plastic housing that connects to the water jacket on the engine block.

In most cases, people are just getting the entire assembly despite the fact that the leak could come from several different areas.

The repairs themselves are straightforward, yet still require a fair amount of do-it-yourself skills.

In other words, this doesn't make the best first time DIY auto repair.

However, if you have replaced the spark plugs or performed other tune-up and maintenance items on your automobile this probably falls within your skill set.

The procedure includes removing the four bolts to separate the housing from the engine block. It's necessary to clean the surface before installing the new parts.

However, you need to be careful because aluminum is a soft metal. You don't want to use a steel wire brush or sandpaper.

Ideally you'll use a plastic razor blade scraper specifically made to clean aluminum surfaces. The replacement part comes with a generous O-ring that does an excellent job of sealing.

You also don't want to over tighten the replacement part on reassembly. The retaining bolt threads are aluminum and the housing is still made out of plastic.

Failure of plastic parts strikes again. This time it's the antifreeze recovery tank hose. It can actually leak on both sides. Sometimes the side connecting to the overflow bottle leaks.

We've seen anything from loose or broken clamps to a crack in the nipple on the bottom of the overflow bottle.

Follow this hose down and you'll find that it attaches to the thermostat housing discussed in the article above.

You’ll find a metal clip that holds a plastic fitting onto the top of the housing. It's common to see a leak in this area.

Since there’s a rubber O-ring at the connection many believe that this is the root cause of the problem.

However, so far, when we locate a leak in this area we've actually found a broken plastic fitting on the coolant tank recovery hose itself.

Since this is a specialized fitting fused right onto the hose, the only way to complete the repairs becomes to replace the part. Adding a clamp will not solve the issue. 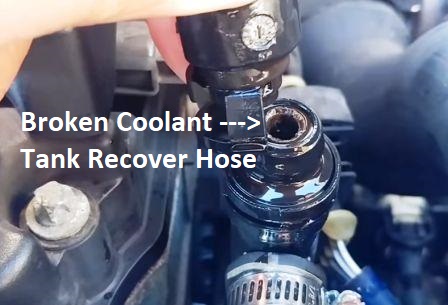 If your hose isn't leaking from this location, show great care when removing it during the thermostat housing replacement operation as it snaps off easily. We have a picture  that shows you how the fitting breaks and then leaks.

Let me squeeze in another development on the 1.8L and 1.6L Chevy engines found in the Sonic and Cruze models.

The throttle body heater inlet pipe has become yet another area that you'll find a coolant leak issue. Yes, another plastic part that becomes brittle with time and miles.

Plastic doesn't age well in the engine compartment, but that doesn't stop GM from using it year after year.

I worked for General Motors dealers in the service department for the better part of 30 years. After retiring from this position I continued to support the Chevrolet and Cadillac brands.

I truly hoped that the overall quality improved to catch up with the rest of the industry.

Unfortunately, as much as I want to believe in this company they bolted a plastic coolant housing directly to a high temperature area of the engine.

After inspecting a few of these failed coolant thermostat housing parts on several different years, you find different types of failures.

Some of these housings become brittle from the heat and crack from vibration.

On the newer models with the aluminum thermostat housing they installed many of these with RTV silicone only.

This means they didn't seal it with an O-ring. The newer replacement units have a nice thick O-ring.

Still it's hard to stick up for this design when it fails within a few months after the base warranty expires.

The base warranty on these cars is a 3 year/36,000 mile basic and 5 year/100,000 mile powertrain coverage. Of course they don't consider the coolant leak a part of the powertrain warranty.

In some cases General Motors will identify common failures across a wide amount of vehicles and offer a special policy. This hasn't happened for the Chevrolet Cruze coolant leak yet.

With that said, there's no reason that you shouldn't call the respective GM brands customer service department and tell them what happened. They might render assistance of some kind?

Update: As I mentioned, my mom owns one of these cars. It's list of problems continues to grow. I had to replace the valve cover because the built in PCV valve failed.

I also had to replace the ignition coil pack. Now it's developing an intermittent electrical issue that appears to require replacement of the fuse box in the engine compartment. We'll be writing about that next.