Unfortunately, Chevy Colorado passlock problems can leave you stranded with a no start condition.

This becomes a situation where the vehicle fails to recognize the key and activates a false lockout mode.

In other words, your ride treats you like a car thief. Note: I've included the relearn procedure for Chevrolet security systems below. You'll need this after the repair is completed.

Some say the lock down mode shuts off the fuel pump and some insist on some models it turns off ignition pulse signal.

Either way, it creates a scenario where the engine cranks around, but fails to start. This happened on the Chevrolet Malibu years ago.

However, this time, the manufacturer included a program to reset the system in an attempt to get drivers going again.

Nevertheless, the procedure is lengthy and inconvenient at best. At worst, it won't work at all and you'll still need a tow truck.

Before we continue to discuss the Chevy Colorado security system problem, let's talk about the reset procedure first.

When the engine fails to start and the security light remains illuminated or flashing, you can attempt to bypass or reset the system. 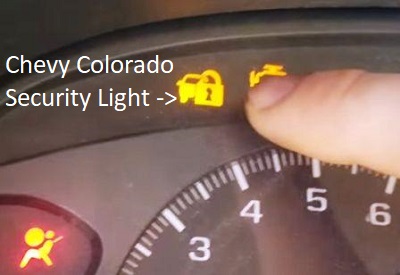 Chevrolet built in a feature to bypass the factory installed anti theft device, but they couldn't make it easy, because that would lead to a huge amount of stolen trucks.

Unfortunately, the process requires precision timing and about 35 minutes to accomplish. But, it might just get you going and save you a tow bill.

The procedure includes turning the key on and leaving it in the run position for 15 minutes. Next we turn the key off for 30 seconds.

Unfortunately, this reset only works one time and you'll have to perform it over again every time you lock the doors. Activating the door locks re-arms the security system.

The motivation behind this article is a long time customer of mine owns a Chevy Colorado. They lived with the problem for  months before they came up with the funds to fix it permanently.

The family uncovered a YouTube video (and you can do the same) that outlines a streamlined Passlock reset procedure that worked for them.

With that said, I've included the procedure for relearning the security system after the repairs are complete.

First some good news. Replacing the passlock module doesn't require a dealership scanner for reprogramming the security lock out function.

I'll include the relearn procedure below for your convenience. As often seen with plastic car parts, the problem with this electronic module is with the connection area.

This is the area that I normally talk about properly testing each individual component to ensure proper diagnosis.

However, in the case of these Chevy Colorado problems I've seen no variety in failed components. In other words, so far for me, it's always a failed key reader located at the end of the ignition lock cylinder.

The telltale warning sign this reader failed is the illumination of the security light displaying the locked padlock symbol.

As we mentioned in the opening paragraph when this system detects trouble, it disables the fuel pump causing a no start condition.

After discussing the issue with some dealership technicians they also indicated they go right for the lock cylinder replacement.

These guys have specialized equipment at their disposal for diagnosis and in most cases, they don't even use it, because of the high failure rate of the plastic key reader. 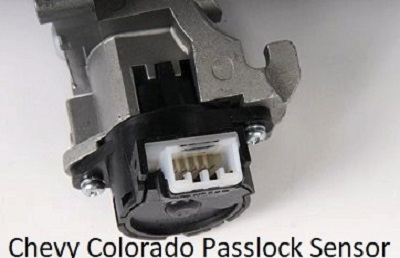 Let’s talk about the elephant in the room before we discuss replacing the Chevy Colorado ignition lock cylinder.

Many people opt for replacing just the little plastic sensor mounted on the back of the ignition switch.

Unfortunately, they don't sell this part separately, at this time, so it comes with the entire lock cylinder housing.

At first glance it doesn't look like there's a good reason to replace the housing, because it's made of aluminum and looks fairly sturdy.

Although this is true, inside we have a few plastic linkage pieces that can wear out over time and cause a different set of problems.

Therefore, I know it's a lot easier to replace just the little plastic key reading sensor on the end, but I would take the time to do the job right.

The other reason I always replace the entire part is because it seems wasteful to purchase the entire assembly and only use that small piece.

Note: If you decide to just replace the key reader, you'll probably need an offset or 90 degree angled Phillips head screwdriver due to the limited access space.

The next step is to remove the steering wheel to gain access to the ignition housing retaining bolts and screws. For this reason I recommend leaving the job in the hands of a trusted professional mechanic.

For those that have experience with taking a steering column apart on other year, make and model automobiles this job should fall in your wheelhouse.

In fact, disassembling the steering column on the newer models is actually quite a bit easier than cars built 20 years ago. 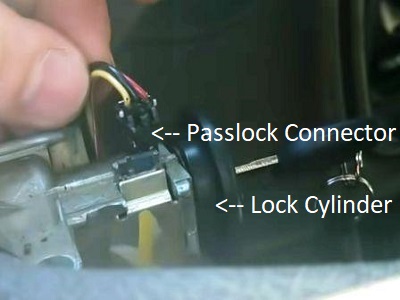 You can poke around the Internet and find people that have engineered ingenious ways to bypass the Chevy Colorado passkey system. I would argue that this is really not the way to go.

Let me use a specific example where people like to take the yellow and black wires and connect them together to bypass the key reader in the ignition switch.

When you connect the yellow and black wires the engine will start every time you put the key in and turn it to the crank position.

With that said, the security light will remain illuminated as long as those two wires are connected.

Although you might not be interested in the vehicle's resale value at this time, it will be a problem when you go to sell the truck.

As the Chevy products age, we sometimes start driving around with illuminated dashboard warning lights.

Especially, the check engine light and now we can add the security light to the list. If we continue down this path, when we trade the vehicle in, they will subtract money for each failed system indicated by a lit dashboard lamp.

Unless you plan on giving your car to Goodwill or one of those charitable organizations, it will probably be cheaper to fix the Chevy Colorado Pass lock problem once and for all.

We filed this article in the miscellaneous section of the website. You can also visit the Homepage for further details about the car and truck problems covered here.

Use the following procedure after replacing the ignition cylinder or passlock module.

A) Engage the key in an attempt to start the truck. It should just keep cranking, but a site visitor said their truck wouldn't crank either. In any case continue on.

B) Let the key go so it returns to the normal run position and let it sit.

C) After 10 minutes the flashing padlock will go solid and then the light should go out.

D) Turn the key to the OFF position. Make sure you do not remove it and let it rest for at least 30 seconds. Counting 1,000 one thirty times helps.

E) Turn the key and try to restart by engaging cranking mode again.

You'll have to perform this at least 3 times and on the fourth time of performing the procedure it should start. However, if you made an error along the way it takes additional tries.