The older style ignition switch on the 1995 through 1999 trucks exhibits a different list of symptoms associated with the failed part.

On the 1999 through 2000 and even newer Chevrolet Silverado, Suburban and Tahoe trucks we have the same ignition switch problem with different symptoms than the older trucks.

Fortunately, I have replaced enough of these switches that I now bypass my standard logical path of diagnosis and testing.

This saves time when I can just jump in and replace the Chevrolet truck ignition switch if the symptoms meet certain criteria.

In this brief article will cover the common symptoms associated with both distinctive models of trucks and sport utility vehicles.

Sidebar: If you own one of these gas guzzling Chevrolet trucks, take a look at my most recent post about better fuel economy from these V8 engines.

Use the same technique the gas hogs of the 70s used during fuel rationing. 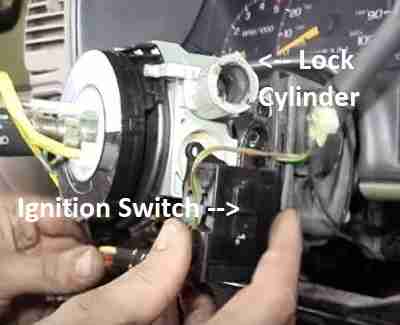 On this page we'll talk about what it takes to replace these parts and link you to some videos so you can see the repairs in action.

These parts are expensive when purchased through the Chevrolet dealership parts department. This provides us with an opportunity to not only save money on the parts, but also the labor.

Before we jump in let's clarify the difference between an ignition switch and the ignition lock cylinder.

From the picture above, you can clearly see that these remain two separate components. The ignition lock cylinder is where you stick the key in.

When you operate the key you operate a separate part known as the ignition switch. The lock cylinder still remains important because it reads the security code embedded in the ignition key.

These parts can also fail and we’ll talk about fixing the lock cylinder at the end of this article.

With that said, when you have problems with the Chevrolet security system the security light stays on solid and the car will often start and die immediately.

The ignition switch on the right fits Chevy truck model years 2000 through 2005.

General Motors changed the design of the switch 3 times in 12 years. Make sure to double check you're ordering the right part.

When you have a problem with the ignition switch you have a bunch of other common symptoms and complaints that we uncover in the next section.

Here's the good news. If you have a bad ignition switch you don't need to buy a new key.

The Chevrolet truck ignition switch problem on the older vehicles carries a unique set of symptoms.

Drivers of these trucks and sport utility vehicles sometimes complain about how the key operates. The spring-loaded return function of the ignition key is built into the switch itself.

Therefore, drivers complaining about the ignition getting stuck, difficult sticky operation or not returning to the run position often find a failed switch assembly.

If drivers only complain about the ignition key becoming difficult to operate this indicates early failure and a situation that will only worsen over time.

Remember that this component allows current to flow to many important electronically controlled automotive systems.

More specifically, the transmission can shift incorrectly and start out in the wrong gear due to an intermittent power supply to the electronically controlled transmission.

The way to tell this seemingly serious transmission problem apart from an ignition switch malfunction is to immediately pull the trouble codes from the vehicle's main computer.

When you find shift solenoid trouble codes like P0753, P0758 and P0785 this becomes an indication of failed ignition switch.

When all of these codes set together, you can bypass diagnosis and head right for the ignition switch. If this is an original equipment component, you've certainly found the root cause of the problem.

This is just another clear cut reason to have a simple code reader around your shop. A scan tool will shed some light on this particular ignition switch issue and you can reset the maintenance light indicator after the repair is completed.

The symptoms of the Chevrolet truck ignition switch problem on trucks from 1999 through 2002 are different than the ones associated with the older trucks.

These drivers often complain about flickering warning lights on the dashboard. In addition, when the switch begins to fail they can cause an intermittent no start and even a stalling condition.

When these intermittent malfunctions occur, you almost always set a trouble code P1682. On GM vehicles this manufacturer specific trouble code represents a failure of the ignition switch.

Unfortunately, this redesign did not improve the reliability of the switch itself. However, it does make the part less expensive and easier to replace.

The main difference between the old design and the new one is the switch disconnects from the harness.

It also disengages from the ignition lock cylinder in a different way. With that said, when you replace the switch, you must time it correctly to the position of the key.

This means you rotate the nylon wheel all the way to the down position. If you fail to get the timing correct between the lock cylinder and the ignition switch you will not be able to fully seat the new part.

In other words, it won’t click into place. This is not the end of the world. It will just take some moving of the ignition key until you find the correct position.

With that said, it's easier if you time the new switch to the same exact position as the one you removed. By selecting the accessory position you make this task easier on yourself.

The 2008 and 2009 Trailblazer also suffer from ignition switch failure. This part on the left fits 2007 through 2009 GMC Envoy and the Trailblazer.

With that said, let me hit back on some of the main points from this article. The parts are vastly different between the older trucks and the newer ones.

The older ignition switch comes with the harness and therefore requires extra effort in the replacement procedure.

Another important point to make is that if you have a security problem replacing the ignition switch won't fix it.

This requires replacement of the lock cylinder or repairing the electrical connector that provides the security code or passkey information.

You can see a quick workaround on this YouTube video that shows you how to repair the electrical connection instead of replacing the lock cylinder.

YouTube also provides excellent videos on how to replace the Chevrolet truck ignition switch on both the older trucks from 1995 through 1999 and the newer trucks that are 2000 model year and newer.

If you own a Chevrolet truck or SUV read this article on how to fix other intermittent Chevy truck electrical problems. Also stop by the homepage to see what else we covered.