Unfortunately, EGR codes on Ford pickups are not uncommon. There are nine separate codes that can set for this one problem.

The good news is some of the failed components are inexpensive and diagnosis remains straight forward. Scroll to the bottom to see a list of the trouble code numbers, including definitions and a complete diagram of the system.

However, the things you learn on this page will certainly provide enough information to diagnose other EGR codes on your Ford automobile, pickup truck or sport utility vehicle. Of course, when we use the three letter term, we're talking about exhaust gas re-circulation.

This process of reintroducing exhaust back into the intake charge has been around since the early 70s. Engine designers use this to lower combustion chamber temperatures and reduce tailpipe emissions.

When the system malfunctions, it boils down to either too much or not enough exhaust gases mixing with the intake charge. When too much exhaust enters the combustion chamber the vehicle runs rough at idle and experiences lack of power under load.

If the flow remains insufficient then the vehicle emits higher emissions. This works against the federal clean air act. If too much exhaust flows back into the intake manifold the engine suffers from a lack of power, stalling, surging, poor fuel economy and sometimes bucking when under load. 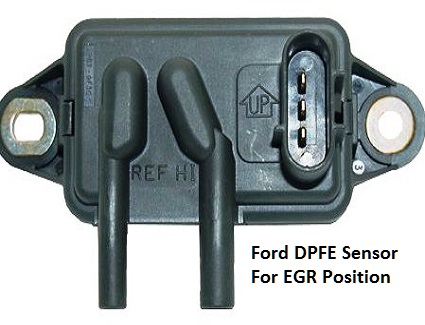 Three Parts that can Cause EGR Problems

There are three separate parts that work together in an attempt to flow the proper amount of exhaust gases back into the engine to reduce tailpipe emissions.

In addition, carbon likes to develop in the passageways the exhaust travels through. This is because the exhaust gases carry heavy soot particles from combustion. This means there are actually four separate problems that can cause one single code to set.

I know a few people that would like to just put a piece of black tape over the check engine light, but you really want to solve the problem for a couple of reasons. First, I should mention that the proper repair doesn't cost a lot. 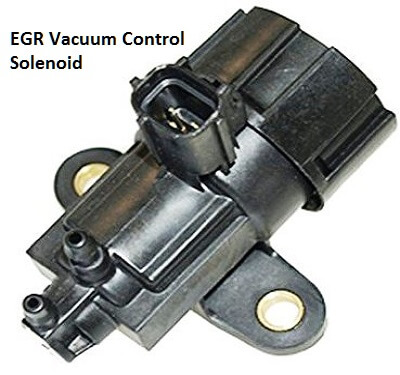 However, the No. 1 reason for me to fix the issue, is you will not pass the state inspection with a set trouble code in the P0400 range.

The other reason becomes the elevated emission from a malfunctioning system isn’t good for you or the environment.The clean air act does have some merit.

Finally, when the system flows too much exhaust or at the wrong time, engine performance and fuel economy suffers. The good news is diagnosis is straightforward and this isn’t the worst problem you could have on a Ford vehicle.

The EGR Position Sensor or DPFE

The engine control module wants to know what the EGR valve is doing at all times. It should remain closed at idle and open at varying degrees as engine RPM and load increases.

The computer uses this sensor and trusts the data to decide which code to set indicating a failure within the complex system.

If the sensor starts malfunctioning, then the computer sets trouble codes based on this misinformation from the position sensor. This means that testing the DPFE (Differential Pressure Feedback EGR) sensor is high on the list of things to do first.

There are only three wires and two vacuum lines that go to this important emission sensor. One of the wires is a 5 volt references sent from the ECM. They use a signal wire returning to the computer to report the valves exact position.

The third wire is a strong ground connection. I decided to talk about the DPFE sensor first, because it's a commonly failed, cheap plastic component. However, you don't have to replace it without knowing if it's bad first.

You can use a voltmeter to test the signal heading back to the computer to see if it varies with the vacuum signal. With the key on, engine off you can take a meter reading.

When the engine is idling, maximum manifold vacuum is present at the sensor input. This should change the meter reading from your baseline measurement.

If the signal voltage stays the same during these two tests, you have a bad position sensor. Another thing to note on vehicles approaching 20 years old.

The vacuum lines attaching to the DPFE sensor are probably in poor condition. For this reason you should replace them along with the sensor. For some reason these little vacuum lines are not standard sizes. Fortunately, they don't cost a lot of money and I will provide a link over to the right where you can get these specialized rubber hoses.

Operation of the EGR valve control solenoid is straightforward. It has two wires going to it and two vacuum lines. The solenoid opens and closes allowing vacuum to flow to the exhaust gas recirculation valve diaphragm.

The wires are a simple power and ground set up. They apply 12 V to one terminal of the control solenoid and a ground is supplied from the main computer or engine control module to open the solenoid.

An important note here is the solenoid's default position is closed. When the solenoid fails, it won't flow vacuum to the valve and you will have no exhaust circulating back to the intake manifold.

Testing becomes simple, because you can verify the 12 V signal and then back probe the connector as you open the throttle and verify the ground gets applied by the ECM.

To quickly check the operation of the control solenoid you can just verify a vacuum signal at the EGR valve when opening the throttle. If the valve is opening you know the solenoid remains fully operational.

If you test the DPFE sensor and the control solenoid and both are working properly, we might have carbon buildup in the EGR passages. Logic dictates, if the system is functioning electrically, then we probably have a mechanical failure.

Exhaust fumes contain a large amount of black carbon. Over time these can deposit on the sides of the passageways and restrict the amount of flow that's allowed into the intake manifold.

You can take the EGR valve off the engine and physically inspect the passageways. However, there is another way to test if a blockage becomes the root cause of the EGR codes on Ford pickups.

If you notice at the top of the EGR there's a vacuum input. With the engine idling you can connect a hand vacuum pump to the valve. Applying vacuum should open the valve at the wrong time and allow the exhaust to almost stall the engine at idle. 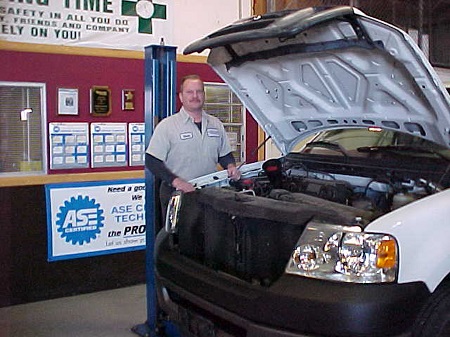 Most of the cars and trucks having this type of problem are getting old. This becomes the number one reason to see whats going on before you take it in for repairs.

Unfortunately, you could spend more than a couple of hundred dollars getting the issue resolved through an auto repair shop.

If you find that the DPFE sensor or control solenoid failed these become pretty easy repairs and well within the skill level of most DIY mechanics.

However, if the problem is black carbon clogging up the passageways, you might be better served seeking professional help. Removing the packed carbon deposits is harder than it looks.

You can save a few bucks by explaining to the mechanic that you have performed some initial diagnosis and why you believe carbon remains the root cause behind the EGR codes set in the computer's memory.

I have another piece of advice. Take some pictures of the engine compartment before you begin testing or drop the car off at the shop. The exhaust gas recirculation system uses a lot of rubber hoses and brittle plastic vacuum lines.

These types of parts become susceptible to the ravages of aging. When you’re connecting or disconnecting these fragile parts you need to take care and be gentle. Another thing to note is that a rubber diaphragm operates the EGR valve itself.

It can rupture or leak and ultimately become the root cause of these types of set trouble codes. I mentioned using a vacuum hand pump in testing for clogged passageways above. The alternative is to find a vacuum source already present in the engine.

You can run a jumper vacuum hose to the top of the valve. I prefer using the hand vacuum pump, because disturbing a vacuum line on a 20-year-old vehicle always comes with a fair amount of risk of breaking it.

List of EGR Codes on Ford Car and Trucks

Failures outlined in the above article and the individual components described can set various check engine light trouble codes. Here is the list of numbers followed by a brief definition. 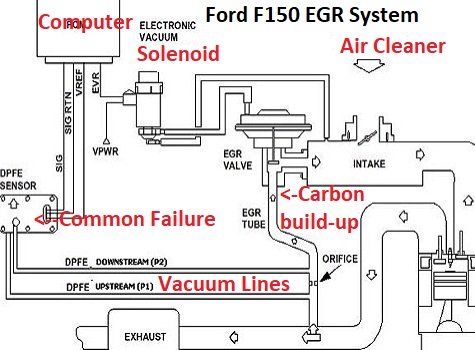 Ford cars and trucks can last a long time. With that said, they also require a fair amount of fixing when they push past the 10 year old or 1000,000 mile mark.

Visit the homepage to see what else we cover on the Fixmyoldride.com website.