If you're old Ford doesn't fire up you might be experiencing Ford ignition module problems. Although I recommend a few quick tests before you replace the part, if your distributor mounted ignition module looks like the image on the right you probably just found your failed component.

Another piece of good news is, the replacement Ford ignition module available on this page features an improved design over the one that might be causing your no start condition today. However, before we jump in and replace this thing let's talk about a few quick tests to make sure we’re not dealing with another problem. Sidebar: Chevrolet fans suffer from this issue as well. See this article about Chevrolet ignition module problems. 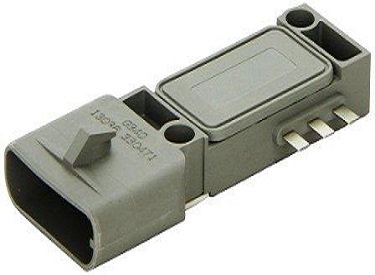 No Spark Caused from a Failed Ford Ignition Module

When the ignition module fails, the engine turns over normally, but doesn't even sputter or kick like it's trying to start. Of course, other situations like a failed fuel pump or even a clogged fuel filter can cause the same symptoms.

Therefore we're going to grab an inexpensive inline ignition spark tester to verify we don't have any spark at all reaching the spark plugs. Sidebar: the nice part about these inexpensive spark testers, available for around $10, is they have a clear plastic window that lets you see the spark operating.

You remove the spark plug boot and insert the tester in line with the ignition wire. Next you attach the other end to the spark plug. You can also set up a jumper wire with one end attached to a good ground found on a frame bolt or even the negative terminal of the battery. 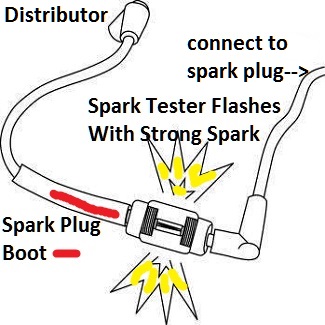 The jumper wire gives you the flexibility to set up the spark tester where you can see it. This allows you to view the spark jumping during a one-man test. Finally, you crank the engine around and look for a strong spark in the plastic visible window on the spark tester tool. If you have spark coming out of the distributor, then your ignition module is not the problem.

In this situation, I would take a quick fuel pressure test to make sure you're not dealing with the lack of fuel problem mentioned above. If you don't have spark and you have one of those rectangular boxes mounted on the front side of the distributor then there is a strong likelihood this is your malfunction.

Before we throw that thing in the trash and get a new part let's make sure we have spark coming out of the coil. Although the module fails more often than the coil I have seen both parts go at the same time. Take the spark tester and put it in line with the coil in the same way you did with the spark plug wire. If you don't have spark from the coil then I would replace this part first and see if it starts.

Why the Old Ignition Module Failed

When the Ford Motor Company put this part on the distributor they apply to a thin film of dielectric grease to the solid state module.

It goes on the the heat sink metal surface on the back of the part where it attaches to the distributor. This electrical lubrication lasts for a long time.

However after 20 years, it starts to degrade and its ability to conduct heat is compromised. Therefore, in the end, most of the times you see the module has failed from heat damage. I have seen do-it-yourself and professional mechanics replace the module without applying dielectric grease to the back of the replacement part.

To my surprise these parts can fail within a couple of months without the dielectric grease applied to the back. I'm not sure if they started putting a small one serving packet in with the module, but the last time I purchased one it didn't come with any heat sink lubrication.

Fortunately, a tube of Loctite brand dielectric grease runs in the eight dollar range and will most likely become a lifetime supply for the average mechanic. If you remember to put the lid on, this stuff stores for an extended period of time.

The tube of dielectric grease I have must be at least 10 years old and is still in good condition. Where else can you use it? It can protect electrical connections and wiring with a moisture-proof barrier that withstands harsh conditions including road salt, dirt and moisture related corrosion.

Plus use it on automotive bulb sockets to prevent premature failure of replacement bulbs. And don't forget to use it on spark plug boots, boat trailer wiring harness connectors and battery terminals.

How to Replace the Ford Ignition Module 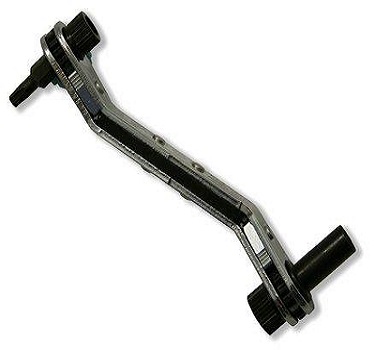 I remember the first time I came across a failed Ford ignition module. I was a young mechanic working on a four-cylinder Ford Mustang with a 2.3 L engine.

After finding ample spark at the coil and none at the spark plug my boss said to stop diagnosis and that a new module was on its way from the parts store.

When the module arrived, he handed it to me while giggling. I wasn't sure at that moment why he found this a funny situation.

However, I would soon realize the recessed retaining bolts for the module were an interesting 7/32 size. Furthermore, the holes that allowed access to the screws were too small to allow a standard or deep well socket to engage the retainers.

I thought I would have to grind down the outer edges of my high end 7/32 deep quarter inch drive socket. Then my boss stuck his head out of the office and said "what's the matter, you don't have the right tool for the job"?

So now I understand why he was laughing, because he owns the special tool used to replace the ignition module on these old Ford's. He let me use his tool for that situation, but when the tool man came around I bought my own.

When I stuck it in my toolbox I was thinking I would probably never use it again. Nevertheless, ignition module failures on these older four-cylinder and six-cylinder engines would be so common in the years to come that I got plenty of use out of the special tool.

With the cost of around eight dollars I say that it pays for itself on the first use. If you use it a second time and you just might, then this purchase was a smart thing to do.

Final Thoughts about an Old Ford Not Starting

Ford trucks are becoming known for troublesome, but long lasting vehicles. If you own a 2004 through 2010 F-150 timing chain problems exist in your future.

In the same way it's not uncommon to walk up to an old Ford from 1985 through 1996 and have it pull a no start on you. Although the ignition module is a common failure it's not the only thing that can go wrong with an old Ford.

This article highlights two of the most common problems with the ignition system. Again these are a failed module or defective ignition coil. In fact, I would say if I walked up to a 1989 Mustang with a no start there's less than a 25 percent chance of it being something else.

Remember that the spark tester can eliminate all of the malfunctions on the fuel side of the circuit. If you insert the tester and there’s no spark, it means you don't have to bother with testing the fuel pump or any of its electronic control systems.

Let me tell you about a 1988, Ford Escort that really threw me for a loop. It had a no start condition and there was no spark. I replaced the ignition module and it didn't fix the problem so this was the first time I got burned.

Upon further inspection there was no power making it to the distributor. To make a long story short, we had a missing ignition signal coming from the vehicle's main computer. When I dug out the old-style Ford ECM from underneath the passenger side dashboard, it was wet with engine coolant from a slow heater core leak.

Coolant infiltrated the computer and burnt out the circuit that feeds power to the distributor. What’s the lesson here? If you don't perform some testing and just jump at the module you might get burned like I did.

There is an excellent page available from another automotive site that provides step-by-step pinpoint diagnosis of Ford ignition module problems. If this kind of diagnosis is above your skill level you can always ask a car mechanic for assistance.