We offer this definitive guide to Ford Fusion blower motor problems, because we see three separate issues develop in this one system. The Ford Fusion is one of those automobiles that start to become troublesome as it ages.

A perfect subject vehicle for the fix my old ride.com website. The good news is that there really isn't much diagnosis involved when parts start to fail on this old ride. A good example of this is the broken door handle issues on the Fusion.

When Ford Fusion owners have problems with the blower motor the symptoms fall into different categories, but can often point to the same parts.

One of the most common issues remains when you're unable to control the blower motor fan speed. Although we often see a failed blower motor resistor as the root cause of the problem, other issues exist that can cause repeat failures. We'll get into that below in the blower resistor section.

In addition, the bearings are known to fail on the blower motor and the results could drive you crazy. A clicking or chirping sound heard from the aging blower motor as it runs at different speeds becomes common.

When it comes to the replacement of a Ford Fusion blower motor you have to make sure you get the right parts. They used two different blower motor part numbers throughout the 2006 - 2012 models. We'll get into that issue in the blower motor section. 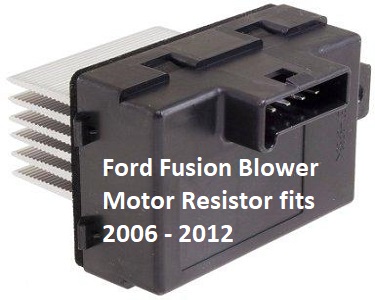 Fusion models 2011, 2012 and 2013 are here on the left. We offer the 2006 through 2011 resistor below this paragraph. Note: The 2011 Ford fusion blower resistors are a toss up. They used both part numbers during this transitional year. Early models received the old part so check your build date on the drivers side door jam.

The most common complaint from drivers with a failed Ford Fusion blower motor resistor is the speed will not adjust from the high setting. In this situation you either get maximum blower or none at all.

With that said, it’s possible to experience other issues such as intermittent operation or an interior fan missing some speeds. This touches on an issue that we haven't discussed yet and this is the electrical connector that plugs into the blower motor resistor pack.

We'll get into that in the next section. However, as I mentioned in the opening the issue really doesn't require a lot of diagnosis. If you're blower motor only works on high you should head straight for the blower resistor module.

They locate this part inside the heater case. You access it from the passenger side of the vehicle under the glove box. When you stuff your head in the foot well area of the passenger side, you look up and you see the blower motor.

The blower resistor assembly is directly to the left of that. It's only held in by a single 7 mm screw. You can also use a 7/32 socket if you don't have metric tools available.

After you remove the screw there are two plastic tabs holding the plastic base of the resistor module into the heater case.

You push up on the tabs and wiggle the resistor loose from the clips. In the next section we're going to talk about Ford Fusion blower motor problems that stem from electrical issues.

The question is why the resistor module went bad and we'll answer that question. But first let's hit on the parts themselves for a minute. I called the Ford dealer up and priced a replacement Motorcraft blower resistor module.

The price was something like $140. When I went on the Internet I could see that you could get these parts for about half the price. This is a good idea, because you may experience repeated failure of the blower motor resistor assembly. 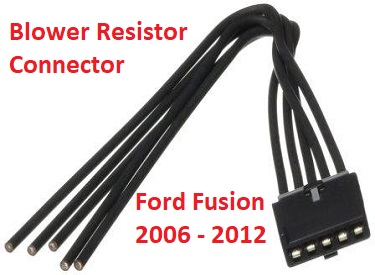 Many different car makers are having problems with their blower motor speed control. As an example, Chevrolet products have failed blower resistors as well. The difference is the Chevrolet part fails because it's no good.

In the case of the Ford Fusion blower motor problems, the resistor often fails for other reasons. In fact, we find the root cause of the failure remains the blower motor starts pulling too much amperage through the resistor assembly.

In turn, not only does the resistor burn up, but the connector becomes damaged in the process. We're talking about the flat plastic connector that plugs into the resistor assembly. The wire harness repair kit isn't color coded, so snip off one wire at a time when replacing the damaged harness.

If you just replace the resistor and reuse the damaged connector the repairs won't last long. In addition, if you replace the flat electrical connector and don't address the root cause by replacing the blower motor assembly you can also have repeat failure.

After fielding many questions about the issue we have one other thing to talk about. They protect the blower motor circuit with a 40 amp Maxi fuse. This fuse is located in the under hood convenience center.

They locate the fuse center in the engine compartment on the driver side over the driver side tire. If you remove the cover the 40 amp Maxi fuse is a green fuse in the number four position from the top left. Many people perform the repairs and find this fuse blown. Learn more about Ford electrical problems.

However, this noise indicates that the bearings are starting to fail. When this happens the motor starts working harder to maintain speed. This in turn pulls more power through the entire circuit. And it's this condition that causes the blower resistor to fail.

If you let the blower motor problem go long enough, it melts the connector that attaches to the fan speed module. The thing to consider about buying replacement parts is the two different part numbers used on the Ford Fusion models from 2006 through 2012. They used one part number for the first three years and a second one for the next three years. Here's a little more information about these different parts.

They used the Motorcraft MM-1061 blower motor on Fusions from 2006 - 2009. In 2010 they switched the motor over to an updated design that really doesn't provide better service. They used the MM 1091 on the newer models.

Although these replacement blower motors probably won't last much longer than the original ones it should be the last time you'll have to replace it. I wouldn't expect to get more than 15 years or 200,000 miles out of a standard Ford Fusion.

As far as replacing the blower motor the repair is very basic and takes little time. With that said, you don't want to strip the screws or break the case that the three retaining bolts thread into. My advice is to push up on the blower motor as you remove the last screw.

Also, you want to make sure you don't strip the screws out when you reinstall them. To avoid this we recommend using a nut driver instead of a ratchet. Hand tight is good enough.

When you go over to Amazon to purchase any individual blower motor parts for the Ford Fusion they recommend the other two mentioned in this article. In many cases this becomes a tactic used to increase sales on behalf of the giant retailer.

However, in this case, replacing all three components simultaneously remains the best way to avoid repeating failures of the blower motor issues mentioned in this article. I see a lot of people just replacing the resistor.

Then the system begins to operate normally for a short time. Unfortunately, this is short-lived and it provides intermittent operation again. We can thank the intermittent contact on the electrical connector mentioned above. Unfortunately, if you just replace the blower resistor you're not actually addressing the root cause of the problem. Here's a video from a gentleman that makes a good case for replacing all three parts.

No one likes to dump a large amount of money into an inexpensive automobile with a low book value. However, it might be time to cut your losses and just go ahead and replace the electrical connector, the blower resistor and the blower motor at the same time. This provides the most reliable heater and air conditioning service going forward. And let’s be honest, we might get stuck in this Ford Fusion longer than we expect.

Sidebar: If you own an F150, Ford Escape or Expedition we put a page together to solve your interior fan speed control problems. See why the resistor module fails in such high numbers on Ford trucks.