It's common for the Ford Fusion door handle to break on the driver side since it gets the most use. Sometimes it seems like a problem with the door lock.

However, they integrate the door lock feature into the handle. In other cases the door opens from the outside, but fails to do so from the inside handle. Either way you need to replace the handle mechanism.

I've seen drivers roll down the window to get in and out of their cars instead of dealing with the issue. After investigating the problem with the Ford Fusion door handle I understand why people want to put it off.

If you price parts and labor from the dealership they charge around $200 for the operation. In some areas with high labor rates, like New York City or Los Angeles, the price pushes $300.

This kind of money could make anybody roll down the window for a while. However, the aftermarket offers replacement handles similar in quality to the factory issued interior door handle.

With that said, the good news is these parts are less than $20 if you shop around. So the question is how hard is it to replace the Ford Fusion door handle. 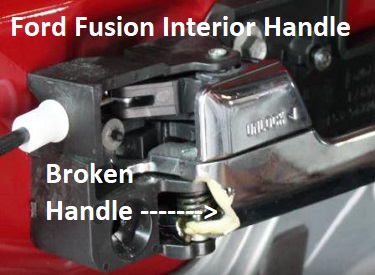 The answer to this question is not very hard at all. With that said, it's not as easy as replacing the interior door handle on a Toyota Corolla. However, I still think it's within the skill level of most do-it-yourself minded people.

With the opportunity to save more than $100, it's at least worth your time to read through this page and see if you can DIY the Ford fusion door handle. We’ll even show you where the hidden screws are.

One of the reasons the replacement parts remain inexpensive in the aftermarket world is the amount of vehicles this part number covers.

The interior door handle replaces part number 6E5Z-5422601-A or 6E5Z5422601A depending on how they format it. Not only does this fit the Ford Fusion, but a host of other vehicles.

It also doesn’t matter if you have power door lock actuators or not. Since the same part number covers six years of vehicles for several different models the demand remains strong for this commonly failed component.

Consumers benefit from this aftermarket competition. You can pick up these handles in the $20 range if you shop around. Sometimes we worry about the quality of an aftermarket part.

With that said, with the exception of a few complaints about the chrome peeling off, the replacement handle should last as long as the factory installed component. 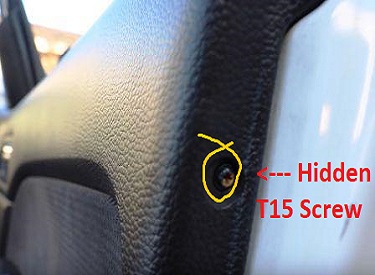 Unfortunately, the door panel has to come off to replace the interior door handle. Fortunately, it's not that hard to get the panel off.

With that said, there are three hidden screws that need to come out before you can pry the interior door panel loose. These retaining screws use a Torx 15 size head and located in the outer edges of the interior trim panel.

There is one more Torx 15 retainer behind the dime-sized plastic cover just above the chrome handle itself. After you remove that Torx screw you can pop off the plastic trim piece that surrounds the handle assembly.

In addition, there's one 7 mm bolt on the door pull. This is where you grab the door panel to close the door after you get in the car.

Once you have these four retaining screws removed it's time to remove the interior panel. You can use a screwdriver covered with a rag so you don't damage the automobile when you're prying loose the door panel.

These are snap retainers that come loose with a little bit of prying force. I usually start in the lower corner and once they start to come loose you can just pull the panel from the door shell.

With the door panel removed you can see the last 10 mm retaining bolt that actually holds the handle on. When you take this out, the handle comes free from the door shell. The handle operates a cable that runs down to the door latch itself. On some Ford models, these door release cables are the problem.

We filed this Ford Fusion door handle article in the miscellaneous auto repair section. You can see a lot of other common car problems in this area of the fix my old ride website.

A special note about these troublesome cars. If you own a Ford Fusion it's probably just a matter of time before you have interior fan problems. See the 3 most common failed Ford blower motor system parts and why you should just go ahead replace them now.