The Ford Mustang VVT Solenoid is one of those parts you'll probably have to replace if you keep your mustang long enough.

I'll double down on this statement if your pony car falls between the model years of 2005 through 2010. However, these chances of VVT problems increase even further on Ford V8 vehicles with over 100,000 miles.

We'll explain why in this article as we uncover the weak spot in this type of oil flow control solenoid. I'll also explain why solenoid kits that promise everything you need for under $50 might be missing something.

Taking the valve covers off of a V-8 Mustang has a little bit of work to it on the driver’s side. You don't have to do anything crazy, but the repair becomes troublesome enough to consider using alternative methods.

Not only will we discuss the easy way and the hard way to go about the repairs, but will also connect you to a video that shows you a great technique for taking a chance on not removing the valve covers. 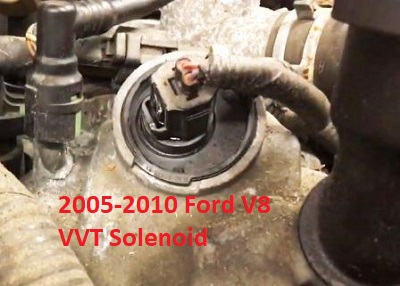 Hint: if you have nightmares about dropping tiny screws into your engine go ahead and purchase a set of replacement valve cover gaskets along with the VVT solenoid kit.

I'll talk about the Fel-Pro valve cover gaskets below and why this company produces superior long life gaskets for the Ford Mustang V-8's.

To kick things off we're going to talk about the first signs of problems with the Ford Mustang VVT solenoid.

This includes a low and rough engine idle, plus stored trouble codes in the automobile's main computer. This becomes one of those times when a $20 code reader is worth its weight in gold.

Two of the most common codes I've seen include the P0018 and P0016. These specific OBD2 trouble codes stand for camshaft correlation error. In other words, the computer detects a problem with the orientation of the cam shafts. 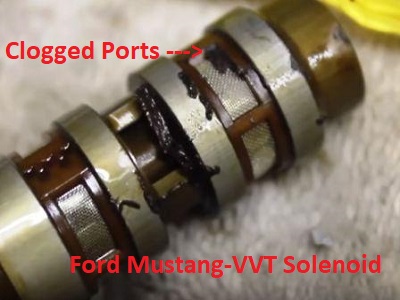 On the 2005 through 2010 Ford Mustang, check engine light codes P0016 and P0018 set quite often on higher mileage vehicles regardless of how often they changed the oil.

Of course, more oil changes lead to cleaner VVT solenoid screens, but it does not guarantee a trouble-free lifespan.

As with many of these aging variable valve timing solenoids sludge can collect over the screen that allows oil to enter the valve. When the valve starves for oil it obviously has a hard time accomplishing precision adjustments on the fly.

Whenever I see a failed camshaft actuator on a Chevy trailblazer the issue is often caused by lack of maintenance. However, on Mustang V-8's, I've seen the actuators fail despite above average maintenance practices by the vehicle owner.

The ability of the engine and the computer to advance the timing becomes diminished or eliminated when the solenoid fails or begins to operate improperly.

This relates to poor engine performance and sometimes even low erratic engine idle. Now let's get into the individual codes and what they mean. The P0016 is the failure of sensor one, on bank one.

Bank one on a Ford Mustang 4.6 L V-8 is on the passenger side of the automobile. In other words, if you are standing in front of the grill looking at the windshield bank number one is on the left side.

A trouble code P0018 stands for a camshaft correlation error on bank number two, sensor number one. Bank number two is on the driver side of the car or on the same side as the steering wheel.

Although I am a strong believer in just replacing computer sensors as needed, I take a different approach with camshaft correlation error codes on the Ford Mustang.

The main reason is that you can get both of the sensors together in a kit with the valve cover grommets for well under $50.

If you buy individual sensors you won't save much money and failure of the other sensor probably isn't too far off.

In the end, they hold this solenoid in place with one screw. The question becomes, do you follow the factory's recommendations about removing the valve cover to service the Ford Mustang VVT solenoid.

The time saved by not removing the valve cover certainly seems worth it if everything goes well. However, I have seen even the most skilled professional technicians with the steady hands of a surgeon, drop the small Torx head screw inside the engine.

In many cases, the screw will tumble down into the timing chain area which means removal of the timing cover. This becomes a big job on the Mustang.

There’s one other thing that you should consider before you make a decision on whether or not to take the valve cover off to replace the VVT solenoid.

Think about the age of the vehicle and the miles showing on the odometer. These factory installed heat resistant silicone valve cover seals last a long time.

With that said, they won't last forever. These gaskets can start to dry rot and leak on their own as they push past 100,000 miles. If this applies to your vehicle you might be better served by replacing them and the actuator solenoid at the same time.

This is especially true if you plan on keeping the car in the family for another 3 to 5 years. I personally recommend removing the valve cover to perform the procedure. If you decide to take an educated chance, here's a video showing a pretty solid technique for replacing the Mustang VVT solenoid without removing the valve cover.

Also note that the driver side valve cover is much more difficult to deal with than the passenger side. However, removal of the power steering pump and reservoir assembly on the Mustang does clear an ample amount of space for you to replace the solenoid and grommet. 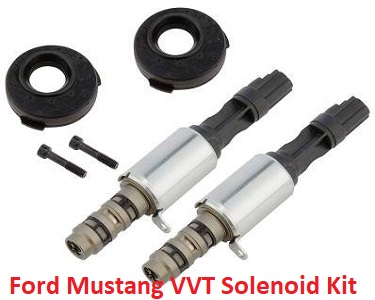 When you're shopping for Ford Mustang VVT solenoid replacement kits you'll have plenty to choose from. Most of the kits advertise a six piece set. With that said, two of the pieces are screws that hold down the camshaft actuator.

The timing control solenoid kit also comes with both VVT actuators, one for each bank. And finally, you get the grommets that seal the valve cover around the actuator itself.

After using them a few times I would say that it makes the repairs not only easier, but longer-lasting. Again, this just my opinion.

I said this in the repair section, but it's important enough to mention again. If you plan on keeping this car in the family by highly recommend you replace the valve cover gaskets at the same time you replace the Ford Mustang VVT solenoid.

We have one last thing to discuss about the replacement solenoids available on the Internet. Way back in 2015 Ford came up with an improved design.

They enlarged the ports and covered them with better screens to filter out any sludge that may enter the valve. On top of that the valve now has larger tolerances internally so it continues to function with small amounts of blockage.

When you read some of the older articles about Ford VVT solenoids, they talk about sourcing updated parts. In my experience,

I found only the updated timing actuators available at this point. As far as I know you don't have to worry about buying old stock and outdated replacement parts, as they are long gone from the stock rooms.

Visit the fix my old ride homepage learn more about this website and read additional articles about Ford car and truck problems.