The Chevrolet Trailblazer camshaft position sensor problem is becoming a common failure. You'll find this issue surfacing on Chevy Colorado and Trailblazer models from 2002 through 2006. Of course, you'll also find them on the GMC Envoy that also uses the 4.2 L straight six engine.

Replacing the camshaft position sensor on a Trailblazer or Colorado is an easy operation. We'll get into that below, but we also have to make you aware of another issue climbing its way up the list of common Trailblazer problems. We've seen an increased failure rate of the variable valve timing actuator solenoid.

This is especially true on high mileage engines and trucks with questionable maintenance and tune-up history. When the Trailblazer camshaft position timing actuator malfunctions, we often find check engine light codes set in the P0010 through P0015 range.

You can also find a code P1345 which stands for a camshaft correlation error. Interesting enough, I have come across the P0014 camshaft position actuator timing over advanced code more often than the other possible codes that could set in that range.

In addition, you might also have some different symptoms when compared to the failure of the camshaft position actuator. We'll cover the differences between the two problems and talk about what it takes to resolve both issues. 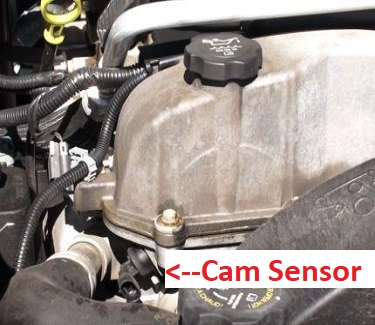 I wanted to cover the Trailblazer camshaft position actuator problem first. What this part does is control the timing as part of the variable valve timing system. The solenoid uses oil pressure to move the cam phaser.

When the solenoid starts to experience problems you often set a check engine light code of P1345. This stands for camshaft correlation out of specifications. In other words, the computer has given the command for the solenoid to activate and not detected that the solenoid followed the instructions.

I'm a big believer in testing parts before replacing them. And there's a couple of quick checks we can make at the camshaft position actuator. First of all the specifications say that the solenoid coil should have a resistance of between 8 to 10 ohms.

This is a quick and easy test using an inexpensive automotive meter. We can also check the signal wire and the ground integrity at the connector. However, from my experience with this actuator failure, shows they will pass both of these tests, yet the solenoid remains the root cause of the problem. 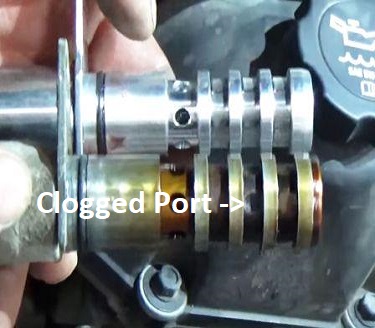 This is because the failure relates to the oil passages in the camshaft position actuator. Therefore, the condition surfaces on high mileage vehicles or at any mileage with a lack of oil changes.

Sludge builds up in the ports and oil no longer flows to move the cam phaser. So, even though the electrical diagnostic tests show that everything remains good, it's this part causing our problem.

In addition, these vehicles also exhibit a rough engine idle. Below in the diagnosis and repair tips section we'll talk about what it takes to remove the camshaft position actuator so you can verify the holes are plugged with sludge.

But you can set codes from P0340 all the way through P0349. The code definition of the P0340 states that it sets when the camshaft position sensor, bank one, shows a circuit malfunction.

Not only are the codes different when you have a problem with the Trailblazer camshaft position sensor, but the symptoms also become different. When the sensor begins to fail it provides an intermittent signal.

If the signal flat lines for long enough, the engine stalls out. This becomes an intermittent stalling problem that drives you crazy. However, when you pull a code P0340 and your stalling condition happens when the engine is warm or hot you’re probably looking at an intermittent failure of the camshaft position sensor.

As I mentioned in the opening, replacing the trailblazer camshaft position sensor is one of the easier tasks you will ever run into on an automobile. The hardest part might actually be disconnecting the electrical connector.

Difference between Camshaft Sensors and Solenoids 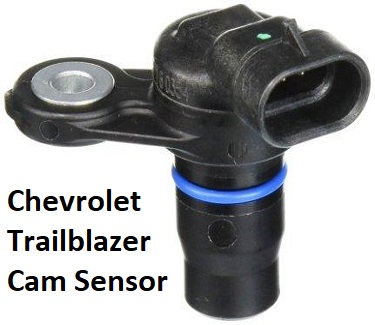 As you can see the camshaft position sensor simply reports to the computer the current position of the camshaft. They actuator or solenoid physically advances and retards the timing as required. These two components work together to control the variable valve timing system.

It's important to understand the differences between these two parts. One just reports on the position and the other one physically provides movement of the cam phaser. Although I believe replacing one part for one problem I have seen enough failures of both of these components to falter from my beliefs.

Too many times I replaced either the camshaft sensor and or the solenoid and the other part soon failed after the fact. Since both of these components remain relatively inexpensive, I'm now recommending to my customers that they replace both parts at the same time. This prevents additional downtime of the vehicle. It also avoids the customer looking at me like I didn't fix it right the first time.

If you're going to try pinpoint diagnose to determine which component failed, you really need to pull the codes. We’re talking about getting a simple code reader in the $35 range to perform this diagnostic procedure.

Not only can the code reader tell you exactly what code set, but they also clear these faults after you complete the repairs.

Another thing to mention since we’re talking about check engine light codes is that additional erroneous codes can set from these cam sensor and actuator problems. In fact, the computer might set engine misfire codes when you have problems with the sensor or the timing solenoid.

This is why mechanics believe in starting diagnosis with the lowest number code first. In this situation we might set a misfire code in the P0300 range.

However, if we start with diagnosis of the P0013 and the P0014 we solve the problem, clear the codes, and deal with any of the additional codes that return.

As for dealing with the trailblazer camshaft timing solenoid, you really want to remove it and inspect the oil galleries for restrictions.

Note that this isn't the only Chevrolet product with camshaft issues. See the 4 cylinder engine with cam actuator solenoid problems.