I stumbled onto the ford door latch cable problem when we went out to dinner in a friend’s 2004 F150 super cab.

We entered from the passenger side door, but when we went to get out it wouldn't open. The driver came around and let us out. I asked him how long it's been like this and he said for more than a year.

I asked him to please let me fix it and eventually they agreed to let me look at it. However, by the time I got my hands on the 2004 F150 the door wouldn't open it all.

More specifically, the passenger side rear door would no longer open from the inside or outside handle. The question became how am I going to get the door open so I can remove the door panel to facilitate repairs?

The answer is to remove the inside door release handle to gain access to the cable. At this point you'll see exactly what went wrong.

The plastic cable end that holds the outer sheathing deteriorated and crumbled. So now when you operate to handle, the whole cable moves and not just the inner core that releases the latch.

To get the door open I fished out enough of the cable to get a pair of needle nose vice grips locked onto the metal portion of the cable. 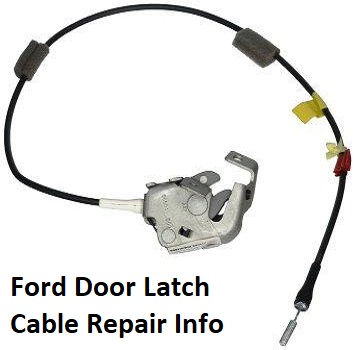 Using a little leverage I was able to release the door and then remove the door panel.

Here we'll talk about the most popular way to tackle this issue without replacing the door latch and cable assembly.

This large parts assembly is expensive when purchased at the dealership. Thankfully, ingenious people came up with an inexpensive solution.

With that said, the first time you do one you'll experience a learning curve. Here we'll try to reduce some of the pain and suffering of installing the repair kit.

The super cool part about this repair is the longevity of it. The billet aluminum piece that replaces the deteriorated plastic piece will probably last longer than the vehicle. So let me provide a few tips for its successful completion.

The way that you deal with the ford door latch cable problem differs between years and model trucks.

On the older vehicles, including the Ford Ranger from 1990 through 1997 you can just buy a new cable.

This part runs in the neighborhood of about $12. This saves you the wrestling and struggling to get the aluminum replacement over the plastic outer cable sheathing.

The downside to taking the easy way out with purchasing a new cable includes another plastic retainer. This will likely fail over time just like the original part.

However, if your original one lasted 20 years getting another 20 years out of just replacing the cable is probably good enough for your purposes.

The nice thing about the repair kit offered above, is it fixes the issue on most years makes and models.

The Ford door cable repair kit repairs 2 doors. If you want to fix 4 doors you'll need a quantity of two.  Ford continued to manufacture the cable ends from plastic or nylon for decades.

This repair kit simply replaces these with an aluminum component. Nevertheless, for some reason the repair kit isn’t always a slam dunk as far as easy installation goes. In the next section I'll talk about the troubles that I had installing the parts. 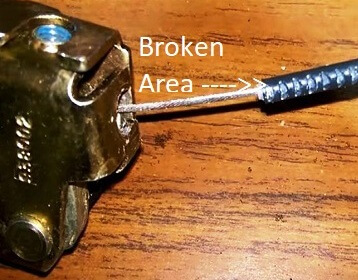 They make a bunch of good videos up on YouTube that covers the replacement of the cable ends.

However, before you run off and watch these videos let me cover a few things I worked out that I don’t see in these videos.

The first step is to open the doors as described in the opening section. Then you need to remove the door latch that's bolted into the door frame.

On the F150 super cab I worked on, it used three Torx 27 sized retaining bolts. I mention this, because not everybody has a Torx set of bits.

However, with the popularity of Torx screws and fasteners on the increase it seems time to get yourself a set.

When I went to install the replacement aluminum cable ends on my friends 2004 F150 crew cab the hole was the wrong size.

More specifically, the metal cable wouldn't slide into position because the hole was too small. This meant that I had to chuck the aluminum cable end into a vice and enlarged the whole using a drill bit.

This added a layer of difficulty that some do-it-yourself auto mechanics might struggle with. First of all you need to wear safety glasses, because the aluminum starts flying all over the place.

Another thing to mention, people probably didn't count on any drilling required to install the part. I know I was surprised. The other difficulty becomes sliding the aluminum replacement piece onto the old plastic sheathing.

The outer plastic sheathing has notches in it where they crimped on the original plastic cable end. This stops you from sliding it into place. Let me make an important point here.

The cable end needs to fit very snugly over the outer sheathing of the Ford door latch cable. It needs to hold this in place while the inside of the cable moves freely up and back.

That’s how a release cable works. However, you can lightly sand the high spots off of the outer sheathing to facilitate the sliding of the new component into place.

In addition, you can lubricate the sheathing with Vaseline or motor oil to make things slide easier.

Sidebar: I have a good exploded view picture of the door latch cable below so you can see what the finished product looks like. After you get the cable end in place, it's time to install it into the door latch.

For some reason it looks like Ford mangled this a little bit during the assembly procedure to hold it in place.

It needs to fit snugly in this area as well, so just tap it into place. After installing the latch it's time to put the door panel back on.

At this point you may notice that that many of the door panel retainers are broken. If you leave open spaces you can get some nasty door panel rattles over bumps.

A box of 60 brand new door panel clips is in the $7 range and could save the drivers sanity.

We filed this article under the miscellaneous automotive problems category. However we have a another article that might interest you about common Ford truck problems. Maybe you should replace the Ford power window switch while you have the door panel off.