When you find GM dash lights broken in 1999 through 2013 Chevrolet and GMC trucks you probably have a defective headlight dimmer switch.

Here we'll talk about what it takes and how much it costs to fix this problem. In addition, review common symptoms of a failing dimmer switch and other common problems.

It's not often that you find the same problem happening on 14 years worth of vehicles. Some of Chevrolet's top-selling vehicles during this time period include the Chevy Silverado and GMC Sierra pickup trucks.

However, when you add the sport-utility vehicles like the Suburban, Yukon and Tahoe the number of automobiles experiencing dash light problems becomes a mind blowing number.

Here’s the good news. With so many GM dash lights broken the demand for replacement headlight dimmer switch parts drove the prices down.

In fact, when demand becomes so strong, that Amazon gets in the game of supplying replacement switches, consumers benefit.

In some cases the GM dash lights broken issue leaves you with no backlight behind the instrument cluster.

With that said, drivers often complain about the lighting for the instrument panel providing intermittent operation well in advance of complete failure. The other dash warning lights and the backlight for the shift indicator work normally.

Drivers also reported that the back-lighting flickers over bumps or goes out when you attempt to move the dimmer switch up or down.

In some cases, operating the wheel of the dimmer switch gets the lights working for a short period of time. Also note, the back lighting on the heater and AC control panel exhibits the same symptoms.

Chevrolet Silverado, Suburban and Tahoe trucks and SUV from 1999 all the way through 2006 use the same headlamp dimmer switch.

Nevertheless, were starting to see the same complaints on the newer trucks that run from 2007 through 2013. These use an updated switch (available below) that develops the same problem as the older model trucks. 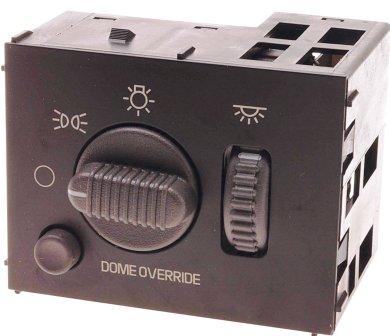 As you probably figured out by now I believe that in most cases that the root cause of the instrument cluster back lighting problem resides with the headlight dimmer switch. The rotating switch uses a variable resistor.

I've taken these switches apart and found the little electrical wiper blades that ride against the resistor on the circuit board wear out. You can clean them and get them to work again, but this remains a short-term solution.

With that said, you can use this procedure to diagnose failed headlight dimmer switches. If it starts working again go ahead and order a new switch, because it won't last long.

As I explained in my strategy-based electrical diagnoses article, the possibility of running into a different problem always exists. I will include an image of the wiring diagram below so that you can do some power testing.

When the headlight dimmer switch malfunctions there’s a chance of blowing the 10 amp illumination fuse. You view this fuse panel when you open the driver side door and remove the hatch cover on the side of the dash panel.

I recommend checking all of the fuses. Defective headlight dimmer switches have the ability to take out this illumination fuse. This can also happen when you try rotating the dimmer wheel frantically in an effort to get the lights to work.

I just finished an article about Chevrolet daytime running light problems. The truth is, these old GMC Sierra and Chevrolet Silverado pickup trucks have their share of electrical problems.

Although the headlight dimmer switch repair takes care of most backlight problems, other issues can leave the dash lights broken. The illumination fuse mentioned above can suffer from a power input problem.

When this happens the fuse isn't contacting the power wire that leads into the back of the fuse panel. You can often fix this by removing the fuse panel and repairing the terminal from the backside. In some cases you can actually use a pick and tighten the female side of the blade terminals to hold the fuse tighter.

The instrument cluster remains an ongoing issue with these same years of Chevrolet and GMC trucks. They have problems with the printed circuit boards on the back of the cluster.

This program allows you to turn in your old cluster for rebuilding and they'll sell you a refurbished replacement.

The key take away here is when the headlight dimmer switch fails the instrument cluster back lighting flickers or is intermittent.

Furthermore you can usually get the dash back lights working again by playing with the dimmer wheel. When your cluster fails or you have a power problem nothing brings the dash lights back on until the repairs are completed.

I'm sure you realize that when you turn on your headlights, it changes the back lighting for the radio display. When you rotate the dimmer wheel it also changes the intensity of the backlight for the radio.

Unfortunately, this will need diagnosis on a case-by-case basis, because of the different power requirements for the different aftermarket radios. Also note that improperly installed wiring tapping power and ground in the wrong locations can create challenging automotive electrical problems.

How to Replace the Headlight Dimmer Switch 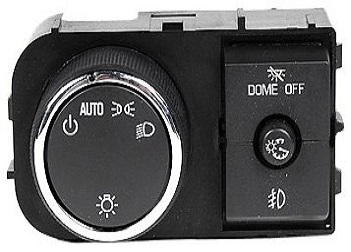 On the General Motors trucks mentioned in the beginning of this article removing the Dash fascia plate to access the headlight dimmer switch becomes necessary. Fortunately, this large dash panel that surrounds the radio, heater AC control panel, instrument cluster and the headlight switch is all one piece.

In addition, snap clips are the only thing holding this in place. So don't waste your time looking for blind or hidden retaining screws. Note to remove the panel and get it out of your way, you'll have to set the parking brake and place the automatic transmission shifter in a low gear with the key on engine off.

I'm sure you can get through this simple operation with a minimal amount of do-it-yourself auto repair skills. However, I did find a two-minute video that walks you through replacing the headlight dimmer switch. If you want to see what else we cover here visit the fixmyoldride.com homepage.