When the Nissan Altima motor mount goes the car vibrates in drive. Owners also complain about a clunking sound when putting the transmission into gear.

Although I've seen this problem mostly on the 2.5 L four-cylinder engine option I've also seen it on the 3.5 L V6 model.

Unfortunately, for Nissan Altima fans I've seen separated engine torque mounts on automobiles with less than 50,000 miles on them.

In fact, whenever I get one of these cars in between the years of 2002 through 2012 I take a good look at all of the engine mounts and the transmission mount.

In a large amount of situations I find at least one of these mounts, if not all of them, needs replacing. It's never good news to a customer who came in for something else to inform them they need all of their engine mounts replaced in what they consider a fairly new car.

However, when these Nissan Altima motor mounts go they allow the engine to move around too much. This can lead to premature failure of other components in the engine compartment. 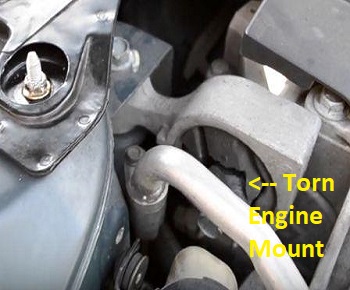 From what I learned about the problem, it seems that the passenger side upper torque mount is the one that goes first.This is also the easiest one to replace.

Unfortunately, when the engine torque mount lets loose, the torque of the engine twists and pulls at the other engine mounts.

It would also seem that none of these original engine mounts installed on the assembly line are of the best quality.

For this reason, we'll talk about just replacing the passenger side engine torque mount and provide a few reasons about why you should consider replacing all four.

Sidebar: if you own a Nissan car or truck, take a look at this article about the Nissan knock sensor relocation program.

This most vulnerable Nissan Altima motor mount is located next to the power steering reservoir on the passenger side. Normally when an engine mount goes bad you can watch the engine jump around as you shift from park to drive and then neutral to reverse.

This excessive amount of movement becomes a sure sign that the part meant to steady the engine has failed. In the case of the Nissan Altima engine torque mount, diagnosis is much simpler. The first sign of trouble is an extremely annoying vibration when the vehicle is in drive.

This vibration disappears when the vehicle is in park or neutral. When your car exhibits these symptoms it's time to take a good look at the torque mount. Get yourself a flashlight and examine the rubber and aluminum pieces. 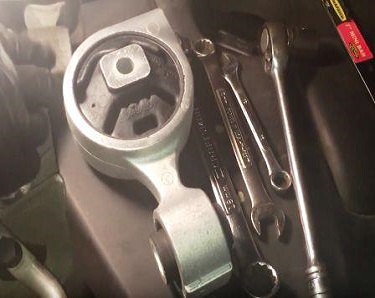 When this mount fails, you can see the rubber torn away or separated from the aluminum brace in the center. Replacing the engine torque mount on four-cylinder Nissan Altima models isn't that bad.

I might go as far to say that it’s a decent DIY auto repair. Again, this would depend on your personal amount of skill level and experience of working on your own automobile. Let me review the simple steps involved in replacing the defective part.

First thing you have to do is back out the retaining bolts that hold the power steering reservoir in place. These 10 mm bolts come out easily with a ratcheting box and wrench. You can't get a socket in there. Then there's a black metal plate mounted on the strut tower that you have to take loose.

It's held in by 13 mm bolts covering the left side torque mount retaining bolt. Keep in mind that you will have to use a breaker bar to get the 18 mm bolts loose. This is because the factory uses Loctite thread locker.

Once you get a few turns on them you can actually remove them with your fingers. The best part about performing this Nissan Altima left side torque mount replacement is the other remaining engine and transmission mounts hold the engine in the perfect place for you. This means you don't need a jack stand or a block of wood or even a floor jack. You are simply removing the bolts, replacing the parts and reinstalling the bolts.

I recommend to my customers that they suck it up and replace all of the engine mounts and the transmission mount at one time. I kind of already gave some insight into why I feel this way. I'll provide a quick review in case you’re not convinced.

When the engine torque mount lets loose it puts undue stress on the remaining engine mounts. Many times people drive around for a long time with the torn engine torque mount. If they jump on it immediately, they might get away with just replacing that component.

However, as I also mentioned, it seems that the factory might have skimped on the materials used on the combination metal rubber engine mounts. In other words, despite the torque mount being the first one to go, it would seem the others are not far behind. 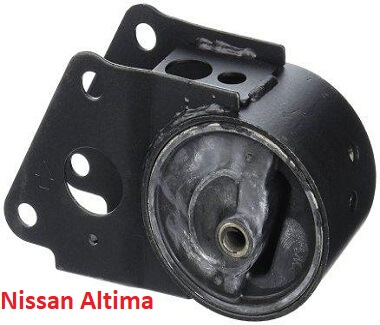 Unfortunately, the remaining engine mounts and transmission mounts are more difficult to replace than the engine torque mount. The advantage to knocking them all out in one shot is being able to purchase a Nissan Altima motor mount set.

The aftermarket parts offered on many popular sites come with a reasonable price tag. In fact, you would probably pay more for just one engine mount from the Nissan dealer parts department.

In addition to easy accessibility to replacement parts, you'll also find a lot of video support outlining the replacement of each Altima engine mount. Although some of these engine mount replacement videos contain extremely annoying background music they do an excellent job of showing you how to get through this repair in the driveway.

If you decide that you don't want to replace all three engine mounts and the transmission mount at the same time let me run an alternative strategy past you.

If you replace the engine torque mount and the left side upper engine mount at the same time you will extend the life of the other engine and transmission mount. Of course, this is if you catch it early enough.

Another thing about just replacing the two left side mounts is the overlapping labor operations. Basically, knocking the two parts out together saves labor time when compared to replacing them separately.

However, when you replace the left side upper engine mount you’ll have to support the engine with a floor jack and a block of wood.

A few more important points to make about replacing a Nissan Altima motor mount. The factory used Loctite to stop the bolts from backing out during engine operation. These parts are exposed to a lot of vibration. For this reason I recommend that you also apply a thread locking product when you reinstall the bolts.

They sell the stuff at the parts store and it's inexpensive. Five or six dollars gets you enough to last you for about 10 years. The factory didn't take the time and the expense of applying a thread locker if it wasn't necessary.

Sidebar: If you own a Nissan automobile, see the easiest way to replace the cabin air filter. Take a look at the other articles we posted in the miscellaneous car repair section. You might find additional articles that friends and family would find useful.