Unfortunately, a Nissan knock sensor code remains a common occurrence on some of the automakers most popular engines and model automobiles.

Although 10 different knock sensor codes can set from P0325 through P0334 the most common code you'll find is the P0328. The code stands for knock sensor bank one sensor one circuit input high.

Many would like to ignore this code, but ultimately it can stop you from passing state inspection. Besides that, the knock sensor is really an important sensor for getting the maximum fuel economy out of your engine.

When the sensor malfunctions, two common complaints become a noticeable lack of performance and a major decrease in miles per gallon. One of the things that shock me is the far-reaching number of automobiles afflicted with this Nissan knock sensor code.

Any vehicle carrying the 3 L V-6 engines from 1990 through 1999 will eventually need this repair. The Nissan Pathfinder and the Maxima are two automobiles that fit into this category. 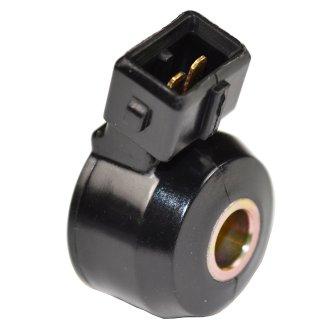 In addition, some four-cylinder models carrying the 2.0L four banger experience these problems. In fact, really popular models like the Sentra, Nissan 240SX and  the best selling Nissan Altima from 1993 through 2001 make this list.

Even some of the new models with the trusted 2.4L like the Nissan Frontier pickup and the Quest minivan aren’t exempt from setting a Nissan knock sensor code.

In this article will explain why it's worth your time to address the problem. Although I prefer to repair these vehicles the right way by removing the intake manifold and replacing the failed knock sensor there’s an alternative.

Plus, you'll find relocation kits, technical tips and replacement parts that help you get the job done. Yes, you heard that right. They came up with a way to increase reliability by relocating the part. I've been in the auto repair business a long time and this remains a rare occurrence.

Testing the Knock Sensor before Replacing It

Maybe it's not a failed knock sensor? I'm a big believer in verifying failed components. Testing the knock sensor isn’t too difficult. With the key on, engine off you can back probe the eight pin connector on the passenger side valve cover of a V-6 engine and find a reference voltage in the 4 V range.

The wire is the largest diameter white wire in the eight terminal connector. You can get a screwdriver and tap on the block and look for changes in the voltage to verify that the knock sensor is working properly.

However, when faced with a Nissan knock sensor code in the P0325 through P0334 range I have never found anything besides a failed sensor. In fact, in many cases I find the sensor broken or cracked. For this reason I don't even bother testing them anymore, because I've never seen anything else go wrong in the circuit. 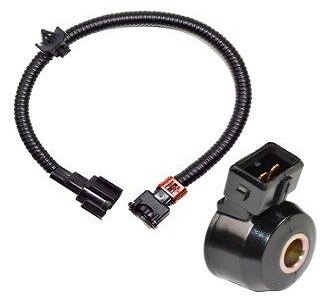 Nissan uses the same knock sensor on the V-6 engines and the two varieties of four-cylinder engines mentioned here.

Surprisingly even the four-cylinder repair procedure isn't that easy, because of the buried location of the part. On the 2 L and 2.4 L engines, they install the knock sensor on the block in between the firewall and the engine. It leaves little room for hands and tools.

Since the location is low the easiest way to get to it is to raise the car on a service lift and approach it from the bottom as you stand under the vehicle. Using a 12 mm stubby box end wrench seems like the best strategy to remove the bolt.

Nevertheless, access is limited in this location. However, if there’s any good news to share it's this 12 mm bolt is not tightened down very hard and comes loose easily. In fact, after you crack the bolt loose you can spin it out with your fingertips.

Replacing this same knock sensor part on the 3 L and 3.3 L Nissan V-6 engines is a whole different animal. They mount the knock sensor in the lifter valley of the block on these engines. The Chevrolet V8 knock sensors are in the same place and also fail.

The only way to get at it is to remove the plenum and the intake manifold. We consider this a difficult repair even for experienced technicians. In the next section we’ll talk about using a relocation kit to avoid having to pull the engine apart.

How to Relocate a Nissan Knock Sensor

What you do is relocate the knock sensor to one of the plenum bolts. When you do this, you cut the original harness and splice in a replacement pigtail that attaches to the new location.The kit is less than $20 at the time of this writing.

I've posted a link to knock sensor relocation kit on the left of the previous paragraph. Here’s the reason I don't like it. The knock sensor doesn't pull in a strong input like it does when it's attached to the engine block.

To me the knock sensor remains a very important component. It allows the engine control module to provide maximum ignition timing advance until it hears an engine ping. When detected it then slightly backs off the timing.

Changing the design and how the circuit operates doesn't seem like a good idea to me. With that said, I have seen people go through the relocation procedure and I haven't heard of any problems yet.

I don't blame you for wanting to take the easy route. And maybe this is the right thing for your situation. For one thing, these old rides are getting towards the end of their life span.

People just want them to pass state emissions inspection without dumping a lot of money into a car that won't last much longer. If you fall in this category than the choice seems clear.

We filed this article in the automotive computer and sensor area of the Fix my old ride website.