At first glance it appears that the Toyota Tacoma blower problems stem from a bad blower motor resistor module.

However, if you just replace the resistor you’ll find yourself doing this over and over again. In this article we'll talk about how to solve the issue for good.

The first thing to tackle is why the replacement part looks so different than the original equipment installed from the factory.

The simple answer to the question remains the technology used to create resistor modules advanced. Not only is the new part more reliable, but it's also less expensive to make.

As you can see from the image the new part uses a micro circuit board to handle changes to the interior fan motor speed.

When many do-it-yourself mechanics open the box of the replacement part they feel like they received the wrong one. As long as it plugs into the original harness connector you have the right parts in your hand.

Since these Toyota Tacoma blower problems stem from melting of the resistor it becomes a clear indication that something went wrong in the interior fan circuit.

Many say on various YouTube videos that the problem is the diameter of the wires feeding power to the fan speed controller. 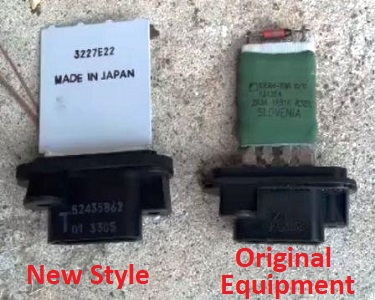 In the next section we'll talk about why I find this statement misleading. I mean, come on, are you telling me the Toyota engineers picked the wrong size wires?

I guess anything's possible, but I'll tell you what I found wrong with Toyota Tacoma pickup trucks built from 2005 through 2013 that I've worked on.

Next up will talk about the root cause of this problem and the results of ignoring why the original equipment resistor and electrical connector burned up.

In the final section I'll show you a picture of how not to perform these basic automotive electrical repairs.

We'll also provide two ways of installing the new electrical connector the right way so you won't have to do it again.

Let me clear something up real quick. People that say you need to replace the resistor and the connector at the same time are completely correct.

However, these people believe this repair becomes necessary, because the diameters of the wires are too small to carry the electrical load of the circuit.

Playing devil's advocate, if these folks were correct, this would mean that the Toyota engineers got it wrong during the initial design and building of the Toyota Tacoma pickup truck.

Although this remains a possibility, Toyota engineers aren't known for making mistakes like this. Here’s another thing to consider.

If they used the wrong diameter wire, why did the system function properly for so long? I also see these people saying the replacement parts are junk, because you have to replace them every year.

So let's sum up this theory about the poor design of the original resistor module connector and wiring harness.

The original equipment part lasted for five or 10 years and then all of the sudden the design became incapable of carrying the current.

Furthermore, the new resistor modules aren't made as well as the old ones because they continue to fail.

People that follow this assumption are doomed to replace the blower motor resistor module over and over again until they get a new vehicle, because they're missing the root cause.

In many cases or at least on the vehicles that I’ve worked on, it is the blower motor that starts to draw too much amperage.

The original design wasn't created to meet these increased power demands. Therefore, it wasn't the size of the wires or the quality of the replacement modules.

In fact, what I’m saying, it’s the blower motor that started this whole situation. On the Toyota Tacoma pickup trucks that I worked on, I found several problems with the original equipment blower motor.

In some cases the bearings start to fail, requiring extra effort to spin the squirrel cage or fan blades. When this happens drivers often complain about noisy interior fan operation or chirping sounds.

I have also taken apart a few of these motors and found the electrical contact brushes appear to be poor quality. If you want to solve your Toyota Tacoma blower problems for good replace the fan motor at the same time. 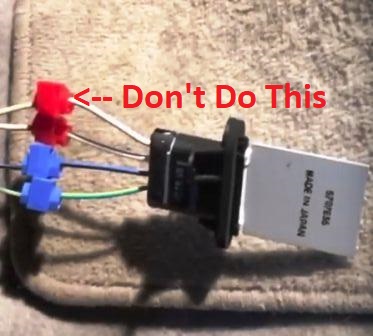 To review what we have covered so far, were talking about replacing the original equipment blower resistor module, the electrical connector and the blower motor.

If you source these parts directly from the Toyota dealership parts department you’ll likely get sticker shock because these parts can cost you more than $200 altogether. Of course, this depends on your geographical location.

Nevertheless, you can buy these components in the aftermarket world for about half the price. With that said, if you buy a cheap Toyota Tacoma blower resistor repair kit they often come with snap lock connectors.

I am not a big fan of these easy to use wire repair parts. When you push down on the wire splicing blade they only contact the wires in a small area.

I would prefer to use a metal crimp connector and solder the connections. Then I melt some shrink-wrap over the repair area.

However, this becomes a time-consuming operation. If time and convenience remain an issue for you I would recommend a butt style crimp connector with heat shrink ends.

This way you get an electrical connection around the circumference of the entire wire and the heat shrink performance to stop that connection from corroding.

The key part in taking care of Toyota Tacoma blower problems for good is to perform a high-quality repair and replace all the failed components.

Let's face it; the reason that Toyota remains the number one selling automotive brand in the world is because the vehicles last a long time.

We may find ourselves behind the wheel of our Toyota Tacoma pickup truck for more than a decade. For this reason we might as well suck it up and fix it right the first time. With the improved replacement blower module and a brand-new blower motor, these repairs can last far longer than the original equipment components.

In closing, blower motor resistor problems remain the most common issue with automotive heating and air-conditioning systems. On some particular models like Chevrolet sport-utility vehicles and the Ford F150 they just need the fan module replaced. However, in cases like the Toyota Tacoma blower problems and the Ford Fusion fan motor issue you also need to replace the connector and the motor.

If you own an older Toyota Tacoma you probably have the cloudy headlight lens issue? See how we restore Toyota headlights on our families Corolla.