This picture represents car battery maintenance problems. As you can see there’s heavy corrosion build up on the positive terminal. This is on my sister's car.

I'm angry about this because she went to a nationally recognized automotive battery installation franchise.

They charged and tested the old battery at no charge. That was a good start. However, she paid top dollar for a premium replacement battery and additional labor charges to recondition the connections.

Here we'll talk about what went wrong with her visit and things she could've checked before she left the facility.

We’ll also cover when it's no longer worthwhile to perform a car battery maintenance service. In other words, why spend $20 on cleaning up a battery that needs replacing anyway.

With winter approaching my sister decided to replace her 4-year old battery with a new one. As a single mother, she didn't want to go out on a cold morning and get the no start surprise.

It seemed like a good idea and she asked me for a recommendation as far as replacement brands. She went to the shop and paid good money for an Interstate Megatron II.

The installation technician called her over to show her how corroded the old connections were. They sold her in a battery service for an additional $30.

When she got home that night I called and asked how it went. She said it was expensive, but it went well. I came to find out a year later the service did not go OK. 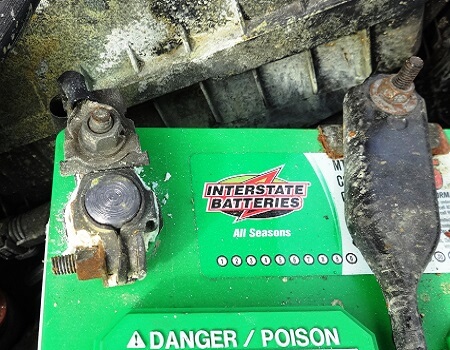 As you can see from the pictures posted throughout this car battery maintenance problems article, the technician used an air-powered whiz wheel to grind away at the battery corrosion.

The result left a scar on this automobile that would last for the rest of its life. The corrosion went flying around the engine compartment and landed on rubber and plastic components.

As you can imagine, battery acid doesn't help these already old parts last any longer. That really wasn't what upset me when my sister sent me a picture a year later of what the positive terminal looks like now.

Not only did they do an improper job of cleaning the corrosion they didn't install any type of terminal protection. She paid for a top level battery, but received bottom level service. I hate when that happens.

What Should Battery Service Include

When I replace a car battery on my own vehicle I want the finished result to look like it did when it rolled off the factory assembly line.

Replacement gives us the perfect excuse to turn back the hands of time. This is one of your cars most important assets.

Not only should terminals be cleaned and protected you can go one step further. They make felt discs that insulate the terminal from the top of the battery case. I'll add them to the help section below.

At a cost of around eight dollars it's money well spent. In addition, they make battery protection spray that you can apply on both the terminal and battery cable side.

In the instance of my sister’s car, I found out when she came to visit, that substantial damage occurred to the battery cable from the corrosion build up.

On her car we decided to replace the positive battery cable. However, there's an alternative available on some models.

If they give you enough slack you can cut the old terminal off and install a new one without replacing the entire length of cable. Ultimately this will depend on the year, make and model of the automobile.

We all know that a battery is used to start the car. But it’s also an important partner in the vehicle's electrical system. It works in conjunction with the starter motor and the alternator.

The starter motor is always taking power away from the battery while the alternator is always restoring that missing electrical charge. When corrosion develops between the terminal and the vehicle's main cables efficiency is greatly reduced.This is why you can't skip car battery maintenance.

This means your alternator has to work harder to restore the ideal level of electrical charge. If you ignore this and the alternator is full fielding in an attempt to charge the battery you could wind up having to replace the alternator a lot sooner than you would like.

Full fielding is when the alternator puts out its maximum amps and voltage. The unit wasn't designed to put out maximum electrical energy for an extended period of time.

Where this situation becomes even more important is an automobile that’s used for primarily short trips.

If you start the vehicle you pull energy out of the battery. If you go for a five minute ride and then turn it off and restart it you’re consistently taking more out than putting back in.

If at all possible you should give your automobile a nice 20 minute or a half-hour run so it has the opportunity to fully charge the battery.

Keep in mind this is not an issue for people who commute to work as they experience longer periods of charging then the person who only takes short trips.

An average car battery will last four or five years. If you pop the hood and see a corroded positive terminal, which is common, consider how old your battery is before you decided to perform any car battery maintenance.

Since heavy corrosion remains a sign the battery has run at a deficit of charge it’s already headed for a shorter life span than one that has been properly maintained. Note that there are exceptions to the four or five year rule.

Newer cars and some older luxury cars have extended life batteries that can go six or seven years. However, in our old rides that use standard lead acid batteries, I would consider myself lucky to get four years out of it. If you want an opinion on your car battery maintenance issue give the ask a mechanic page a try.

What if you think the battery isn't too old and just needs a charge? Read this detailed article covering the charging and testing procedure. The short post provides solid information including how long it takes to charge a dead car battery.