If you want to cruise in style, but lack the funds consider these cheap cars that look expensive. After learning about the top five automobiles in this category review the final thoughts section at the end.

You'll find solid evidence supporting these vehicles as an excellent choice and see my favorite out of the five.

If you plan on hunting one of these expensive looking economy cars down make sure you take my free used car inspection worksheet along with you.

Finally, before we get into the top five list, let me point out the automotive knowledge quiz. This short exam provides insight into your depth of auto education and where to find content in your weak areas. 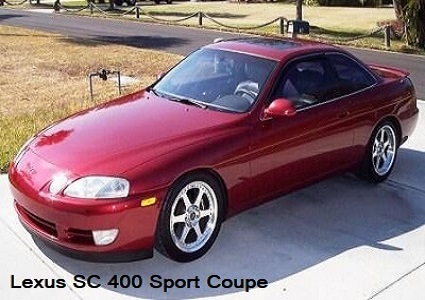 For this article we'll stick with the V-8 powered SC 400. However, although the 3.0 L version lacks the punch and performance of its big sister it does provide the amazing style at an even more affordable price.

Neither of these cars sold cheap brand-new. In fact, affluent buyers would have to buy a $45,000 ticket to ride this ride in the early 90s.

Nevertheless, the Lexus SC 400 Sport Coupe has almost timeless styling. Its sweeping wedge design looks as amazing today as it did when they first launched it. Some consider the SC model responsible for putting Lexus on the map.

After the car ran for 10 years with almost no external changes, the second-generation launch proved a big disappointment.

The nice thing about purchasing a Lexus SC 400 Sport Coupe is nobody will really know exactly what year they built the automobile on first glance.

There's not much of a difference between a 1992 model and the 2000 cars. However, Lexus did make some major improvements under the hood during the 10 year run.

Sidebar: If you buy an automobile powered by the 4.0 L V8, consider refreshing the timing belt and the water pump.

In the early 90s the 4.0 L V-8 pushed out around 240 hp. Although this number remains respectable in an automobile that weighs less than 3,000 pounds, Lexus launched variable valve timing technology for the 1999 models.

This pushed the engine output up to nearly 300 hp. The added horsepower dropped quarter-mile times into the 14 second range. During the last three years of production this car's performance matched its appearance.

The SC 300 models fall on the lower end of the scale as the SC 400 cars push the upper end of that same scale. If you're in the market for cheap cars that look expensive the Lexus SC 400 sport Coupe is hard to beat. 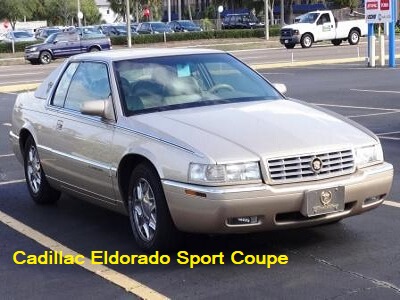 They built the 10th generation Cadillac Eldorado sport coupe in large numbers from 1992 through 2002.

Powered by a hearty Northstar V-8 and backed up by a reliable four-speed automatic transmission makes for a fun to drive luxury ride.

Although many mechanics consider the Northstar V-8 problematic, General Motors really started to get it right towards the late 90s and into mid 2009 when they finally killed the engine.

The all aluminum V-8 power plant pushes out horsepower and torque in the 300 range.

The light weight of the engine coupled with the throttle response of a short stroke V-8 makes the performance of an Eldorado sport coupe surprising.

Although the 0 to 60 time might not impress you this Cadillac will knock down the standing quarter-mile in the 14 second range. This makes it one of the best-performing luxury cars of its time.

I always wanted one of these cars and I still do today. For me, one of the most attractive and collectible Cadillac Eldorado sport coupe models is the 2002 collectors series special edition.

Cadillac only built around 1,500 of these very special memorial cars. However, they only produced the automobile in two colors. If you're a fan of red or white, then you're in luck.

Since we consider these cheap cars that look expensive old by any stretch of the imagination prices are reasonable. Unfortunately, very few low mileage units remain in circulation.

Some of these cars actually have over 200,000 miles on them at this point.

Although I might not want to jump on board with such a high mileage unit, it's nice to know they can go this far on the original engine and transmission installation. 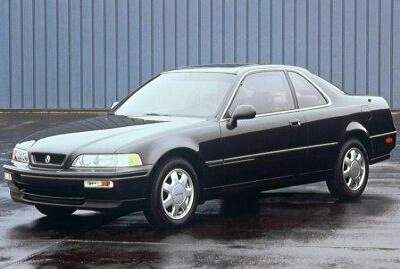 Acura is struggling to find its way in the marketplace these days. However, when they launched the Acura Legend Sport Coupe and sedan in the early 90s it proved a huge success.

The luxurious version of a Honda made its way into the market in 1986. They built the first generation Legend from 1986 through 1990.

The second generation Acura Legend sport Coupe and sedan improved on the original model and ran through the 1995 year.

The interesting thing about these early Acura’s is they marked the departure from the four-cylinder only mindset of the Honda motor Company.

The legend series not only became the first V-6 equipped Honda it also maintained the legendary reliability of this automaker.

At the end of 1995 an impressive six-cylinder engine pumped out close to 250 hp. With that said, the sweet spot of the second generation actually runs from 1993 through 1995.

Not only did you get the series type II engine with more horsepower, it was also available with a six speed manual transmission found in the sport Coupe. 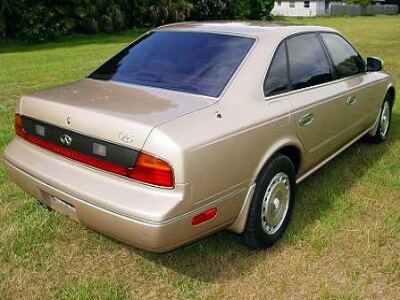 The Q 45 hit the market in late 1989 as a 1990 model. The first generation ran through 1996 model year. In an effort to compete with the Acura cars that had a four year head start they went with V-8 power to outclass the competition.

While providing the performance they also delivered on the comfort and luxury you would expect from a $40,000 plus automobile. In fact the Japanese car came across with almost Italian like style.

Instead of overstuffed comfy seats like you would find in a Cadillac you got firm sport sedan seating that held you in place.

The interior provided a contrast of colors with dark colored flooring with lighter door panels and complementary interior colors that tied into the exterior of the vehicle.

It looked fancy even with a lack of wood grain and chrome trim inside. The 4.5 L V-8 engines had a beautifully unique sound and smoothness that felt superior over American-made V-8 luxury cars.

However, in reality the engine puts out 280 hp. Although it could hang with any of the automobiles mentioned on this page in the performance department it didn't blow their doors off.

Before we move onto the price category I wanted to mention that the reliability of my Infiniti Q 45 amazed me.

Since I performed my own maintenance I became appreciative of a spin on transmission filter and drain plug that made servicing the transmission a pleasure. Now for the bad news about these cheap cars that look expensive. 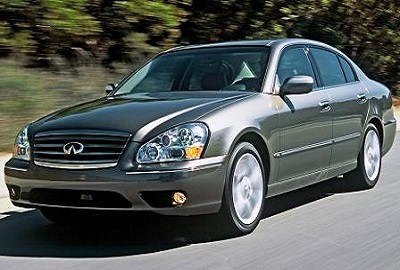 After I got rid of my Q 45 these vehicles started to develop timing chain problems. The timing chain guides would wear out allowing the chain to jump teeth.

If you're in the market for one of these first generation Q series automobiles make sure the previous owners handled this repair correctly.

In the end the Infiniti Q 45 sport sedan didn't sell as well as its competition and struggled for many years.

Because of this the company produced fewer models and finding one in good condition with low miles remains difficult. If I was looking for a Q 45 I would go for the 1995 model year commonly found in the $5000 price range with reasonable mileage and condition.

I'm not a fan of the second-generation cars because they reduced the engine size to 4.1 L and the horsepower fell off.

However, I do like the third generation cars that ran from 2001 through 2006. They went back to the 4.5 L and the styling improved. With that said, these aren't cheap cars that look expensive. They're just plain expensive. 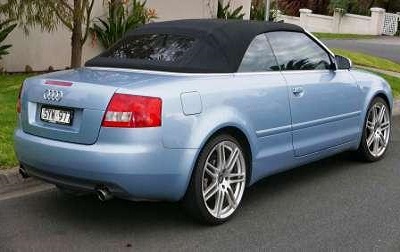 I'm not a big fan of fancy Volkswagen cars, but the Audi A4 convertible sport Coupe is worth a mention with its timeless style and legendary reliability.

The first generation Audi A4 doesn't go as far back as the other automobiles mentioned in this cheap cars that look expensive article.

Therefore, they’re a little pricier than the other four cars reviewed. The first generation Audi A4 ran from 1994 through the 1997 model year.

What the A4 brought to the table included the diverse selection of models available. They offered the two door Coupe in a hardtop or convertible.

The sedan offered family transportation in a station wagon and four-door sedan styles. This is another example of an automobile that doesn't jump out and tell you what year they built it.

Most people see the four interlocking rings symbolizing the Audi emblem and associate this with great wealth.

These cars pull down prices in the $40,000-$50,000 price range when new. However, now you'll find one owner automobiles with average mileage for less than $5000 in many areas.

The car companies like Infiniti, Acura and Lexus knew if their brands would survive, they must please the customer in every category.

They launched exceptional automobiles at a time when low-quality existed across the board. With that said, they weren't trouble-free.

However, they experienced computer and sensor problems at a lower rate than their established counterparts.

Like any old automobile tuneup and maintenance problems also become important in the current value of the automobile.

Finally, because of the age and possible expenses involved with owning one of these cheap cars that look expensive I'm not suggesting they make a great first car for a new driver.

I would happily drive any of the cars listed on this page. However, If I had to pick only one of these inexpensive luxury rides, I would choose the Lexus SC 400 Sport Coupe. 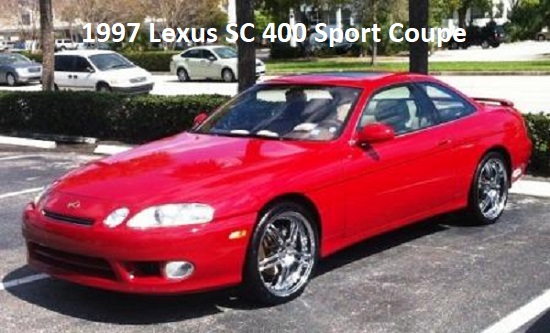