This page is about the Chevrolet intermittent electrical problem. However, the issue also occurs on aging GMC and Cadillac trucks.

My Chevy truck customers complained about this electrical issue for years. Unfortunately, when they show up at the shop everything worked properly.

It’s hard if not impossible to fix a truck that isn’t broken. Intermittent electrical problems remain some of the worst issues to solve for even the most experienced technicians.

With that said, enough people have had the issue, that the problem finally got solved. The affected customers complain about intermittent power outages throughout the vehicle.

In addition, they can experience false check engine light codes and erroneous warnings on the driver information center.

Often the door lock actuators buzz and the power door locks operate on their own. Sometimes the dash lights go out or the entire truck loses power.

With that said, when the truck starts having intermittent starting problems it's time to do something about it. 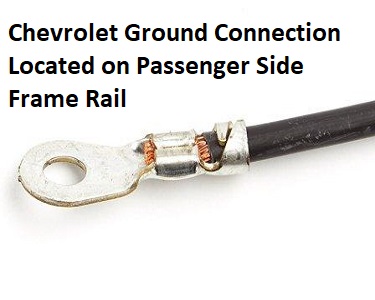 Intermittent ground connections can cause some really strange side effects. In this situation we often see a failure of the main ground cable that runs from the battery to the engine block and also to the frame.

I have personally seen several issues with this one ground cable in many make and model General Motors products built in 2000 through 2015.

However, the vehicle that brought me a successful diagnosis became a 2008 Chevrolet Tahoe. Thank God for this truck.

The Chevrolet intermittent electrical problem got so bad the problem finally occurred in front of me. Finally, the electrical ghost showed himself to me.

When I checked the ground cable for tightness at the battery I saw looseness at the actual crimp fitting that holds the negative cable in place.

Unfortunately, this is not the only problem I found with this cable.

I'm no stranger to complicated automotive electrical problems. Nevertheless, the issue with this Chevrolet negative battery cable had me scratching my head. Let me tell you why.

As I mentioned the connection where the cable goes into the battery terminal was loose. So I thought I'll just fix this connection and everything will be fine.

However, that wasn't the case. I pulled the cable out, cleaned the end of it and then soldered it back into the battery terminal.

Unfortunately, the intermittent electrical connectivity of the truck remained when i thought for sure I had it fixed. So I went to the other ends of the ground connection.

One is located on the frame of the truck and the other is on the engine block. We'll get into how to find these connections in the next section.

After performing the same clean and solder repair of the ends of the cable the problem persisted. At this point I realized that I would have to get a new cable.

A brand-new Chevrolet negative battery cable from the dealer parts department cost just shy of $100. Highway robbery if you asked me.You can find factory type cables on Amazon for less than $40.

We fixed the truck by replacing the battery cable. It appears that water somehow infiltrates the covering of the cable and rots out the cable from the inside.

This is not the end of the story, because the positive battery cable looks identical in construction to the negative side.

When I grabbed the positive cable and started wiggling it, I got a couple of dropouts of the electrical system.

It's for this reason that I think you should seriously consider replacing both the positive and negative side battery cables to eliminate this Chevrolet intermittent electrical problem once and for all. 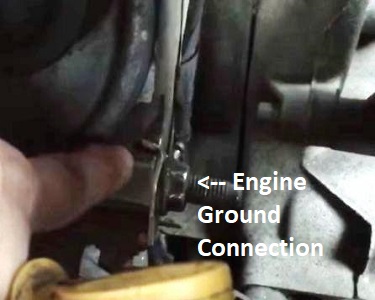 Let's talk about the negative side first. The battery is on the passenger side of the engine compartment near the firewall.

The negative cable has three total connections and a three wire sensor also plugs into the cable itself.

The battery connection is self-explanatory and tackled first. The next connection becomes the large 15mm at the engine block. You can trace the wire down and find that it's mounted to a stud.

The stud threads into the block near the front corner of the cylinder head. It looks like the nut will come off, but when you start wrenching it out the whole stud usually comes out with the nut.

The final connection on the ground side is a little harder to get at. It mounts to the inside of the front section of the frame out near the radiator on the passenger side.

You can get it from the underside of the vehicle. However, there is a lower plastic shield with four 7 mm bolts holding a cover to protect the underside.

After you remove this panel you'll be able to reach the 10 mm bolt holding the ground cable to the frame. The new cable comes with the retaining clips in the right places.

You want to make sure that you tuck the cable in just like they did from the factory. I’ll go as far to say that the new negative battery cable features an improved design.

You don't actually see a space between the terminals and the wire. This should keep the water out and you shouldn't have to worry about repeat failure. 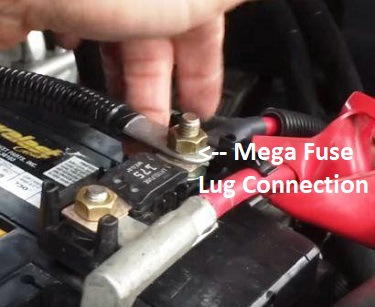 The positive battery cable on these General Motors trucks includes the 175 amp mega fuse. I have yet to see one of these giant fuses blow.

Although the fuse itself isn't the problem the connections to it are. First, I inspected the fuse to verify it wasn't open or intermittent with a voltmeter while wiggling it. Instead I found a loose connection.

With that said, I found the lug loosening up that goes into the fuse itself. This was unexpected.

Instead of tightening the connection or replacing just the mega fuse and being done with it, I started looking at the positive cable.

Do you know where this runs to? That's right, it actually runs to the main fuse box in the engine compartment on the driver side.

This means an interruption in power through this cable can take out any of the individual systems fused in that main relay and fuse box.

The likely hood of the positive cable as the root cause of a Chevrolet intermittent electrical problem just got a boost.

Interestingly enough, when people have problems with the General Motors positive battery cable they often complain about the power door lock actuators activating by themselves.

With that said, power disruptions while driving also remain a common complaint.

The replacement cable comes with all of the cable anchors in the proper locations. This means you don't have to be overly cautious with the removal of the old positive cable.

On some Chevrolet, Cadillac and GMC truck models there’s a separate section of cable that runs to the starter solenoid.

On some of these models this connection to the starter solenoid becomes integrated into the main positive battery cable. You’ll have to check and see which type you have on your vehicle.

I've heard of people complaining about intermittent no starts from failure of this positive battery cable.

I even had a customer tell me a story about how the dealership misdiagnosed this intermittent no start on their Chevrolet Tahoe.

When they returned to the dealership a technician with a little more experience got involved and found a defective positive side battery cable. You would expect more from a flagship dealer service department.

Nevertheless, the Chevrolet intermittent electrical problem can even throw an experienced technician in the wrong direction.

When these parts malfunction the airbag light can come on. In addition, the trucks main computer can set various check engine light codes that have nothing to do with the actual malfunction.

These erroneous symptoms can set a technician on the wrong path of diagnosis from the very beginning.

If you own a gas guzzling Chevy truck the newest article on the site is perfect for you. See how people got the maximum mpg during the gas shortage of the 70s. Use this real fuel economy method today and see what happens.

If you own a Chevy truck, take a look at this related article about GM ignition switch problems. These issues can cause the dash warning lights to flicker and engine stalling.