In the old days they remained a separate component mounted to the door shell. A metal rod, then made its way to the door latch to operate the lock mechanism.

You could literally diagnose and replace these old-style components in a half hour.

In an effort to save pennies per car, manufacturer’s started to integrate the power lock actuator with the door latch assembly.

This did away with the rod and a couple of plastic clips. However, the first few years of automobiles that utilized the updated design became notoriously unreliable.

Drivers often complain that when they hit the unlock button they can see the lock, move, but not enough to disengage. 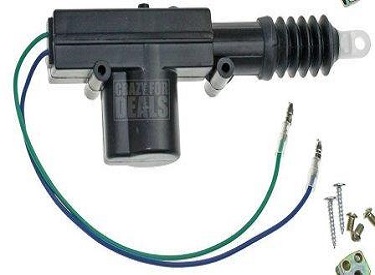 Now instead of just replacing the failed actuator you'll have to replace the entire latch assembly.

The newer integrated parts, which you can see pictures of below, are more expensive.

As an example, you can locate a power lock assembly for the driver side door on F150 trucks in the $30 range.

However, that same part for a Toyota or Lexus will probably cost in the $75 range. This simply becomes a matter of supply and demand.

The Ford door lock actuator motor assembly fails in large numbers. The Toyota and Lexus still experience issues, but the demand is lower because of fewer malfunctions. 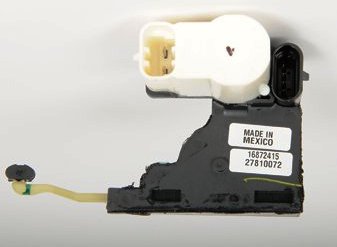 You know the symptoms. You hit the unlock button and the lock moves a little, but not enough to unlock the door.

With that said, sometimes it doesn't move at all. Although a failed power door lock actuator motor becomes the most likely scenario, other possibilities exist.

We can get a large jump on the diagnosis by operating the power door lock switch and noting the results.

If you see a slight movement in the manual door lock knob this means we have power at the actuator assembly.

In the same way, if we hit the switch and hear a buzzing or humming, this also indicates power and ground at the actuator.

Some actuators actually mount on the side of the door latches. In other cases, they are completely integrated into the door latch assembly.

As for the automotive electrical side of the equation, most automobiles use a two wire electrical connection.

The actuator assembly is nothing more than a solenoid. As we learned in the automotive electrical section the solenoid is a mechanical part operated by electrical principles.

This is the lock and unlock feature for power door locks. This makes diagnosis straightforward. You can unplug the door lock actuator and probe the connector side with a test light or an automotive meter.

The automotive meter option works best in this situation. When you operate the lock in different directions you should see 12 V across the electrical connector.

Physically replacing the door lock actuator varies between models and manufacturers. The other thing that determines the procedure is the way the actuator motor integrates with the latch assembly.

As much as the manufacturer want to make all of these parts out of plastic the door latch remains a metal piece. This means you have the metal door latch combined with the plastic solenoid and motor housing.

With that said, the most challenging part of replacing the power lock motor and latch assembly is often its location. It's no longer mounted to the shell of the door like they did in the old days. Now you have to reach inside to facilitate the replacement.

As a mechanic, I am warning you that you need to show caution when reaching inside an automotive door. The thin metal shell can become sharp like a razor blade in the manufacturing process.

You should always wear long sleeves and work gloves when you reach inside the door panel. Car makers often use three screws from the door jamb side to retain the entire assembly.

The problem becomes disconnecting the manual linkage. As far as we have advanced in the automotive industry, we still have manually operated door locks as a fail safe.

This means that a rod must find its way down to the door latch assembly. These rods are retained by plastic clips.

Removing the rod from the latch assembly without breaking the plastic clip becomes important. It can also be difficult, because of a lack of space.

The long story short, if you break that clip a new one doesn't always come with the new door actuator and lock assembly.

On modern automobiles fixing the power door locks becomes important for a few reasons. Most cars come with a radio transmitter key fob. This allows you to unlock the doors as you approach the vehicle.

It operates the same actuator motor assembly that the interior switch uses. If this isn't functioning correctly and you have to pull out your key, to do it the old-fashioned way, we consider this a security problem.

The other thing to consider is preserving the overall value of your automobile. If you trade in your car at a dealership they test the power door locks. They subtract a lot more money than they should from the trade-in value if they don't work. 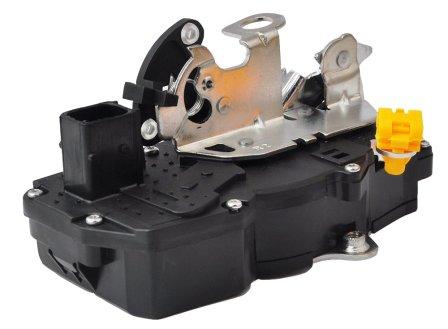 In addition, the parts cost remains under $100. Diagnosis, as explained above, often becomes simplistic.

Watch a few YouTube videos of people replacing the door latch assembly to see if the demonstrated skills fall within your wheelhouse.

If you decide you're not up for the task, consider purchasing the power door lock actuator assembly online to save a few bucks on parts.

This won't make your auto repair shop happy, but they'll collect the labor charges, so they got that going for them. Now see if you can fix that power window problem.