The Ford Triton timing chain is a complex set up featuring two separate chains. Although I've seen the Ford Triton V-8 with 300,000 miles on it, these three valve V-8 engines haven't been exactly trouble-free.

With that said, here we'll focus on the timing chain problem. When sourcing parts I recommend  OEM replacement kits.

Fortunately, I have gotten away with much cheaper after market kits without a problem. I've included one of these bargain kits at the bottom of this page that has decent reviews.

However, my point is, this remains a time consuming operation that you don't want to do twice. Yes, you can get dealer parts online.

If you could think for a moment about how many engines we're talking about, it's mind blowing. From 2004 through 2010 this engine came inside one of the best selling trucks of all time, the F150.

It's hard to say this is a good engine, but it's undeniable they can go a long way when cared for properly. Unfortunately, this engine provides many challenges for owners and drivers. 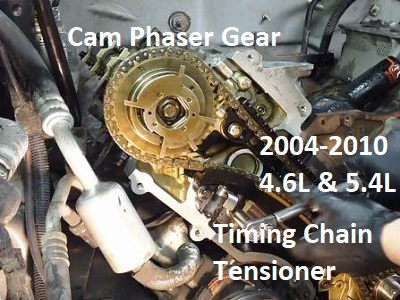 Join us as we dive into first design problems with the plastic chain guides and tensioners. We'll even take a look at the cam phaser gears known for creating a knocking sound at idle. These malfunctioning cam phasers also set a variety of check engine light trouble codes.

There are a bunch of separate things that can go wrong with the Ford Triton timing chain system. Each one of these failures carries a different set of symptoms.

However, we can group a bunch of the symptoms together to help us understand if our complaints point to a timing issue. We'll get into exactly what goes wrong with this particular set up on the Ford Triton engines in the next section.

Many of the symptoms associated with a handful of the problems turn into noisy operation complaints. The engines often make a lot of noise at idle when hot or a rattling sound on cold engine startup.

Both of these issues can point to problems with the tension on the chain and the condition of the guide assemblies.

Here's the best way to verify the engine noise you're hearing is from the timing chain. Use a professional mechanic stethoscope. You can also use the old large screwdriver carefully pushed up against the ear trick, but the mechanics stethoscope certainly works better and only cost around $20.

In addition, to the knocking noise complaints as a result of incorrect tension or broken plastic guides we can also set a fair amount of check engine light codes.

These Triton V-8's are known for setting cam phaser codes from P0340 through P0349. In some cases, these codes set because of the amount of slack in the chain.

Excess of slack in the chain allows the timing to wander up and back as the computer tries to put it in the right spot. In addition to a loose timing chain you can also have problems with the cam phaser sprockets.

The cam phaser sprockets have their own set of moving parts inside. This is where the variable valve timing comes in.

The ability to rotate the cam phaser allows the computer to micromanage timing of the camshaft. When trucks lose the ability to precisely control the timing, not only will they set a check engine light code, but can experience rough engine idle and lack of power. 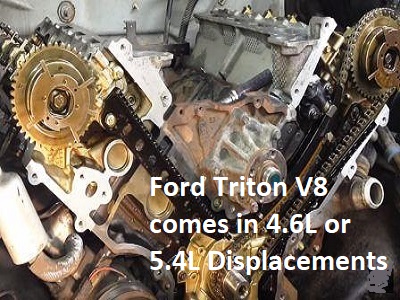 One of the design flaws with the existing timing chain setup found on the 4.6 L and 5.4 L modular V-8 engine is the overall length of the chains.

They are super long chains and made of light-duty materials. Once the chain develops a little slack it starts slapping the plastic guides.

After you identify that you have a timing system problem the next step becomes to disassemble the area. When exposing the timing chain you often find pieces missing from the broken guides.

When the chain becomes loose and starts to rattle around the seal can break loose and the tensioner starts to bleed off oil pressure.

With incorrect tension applied to the chain the noise increases along with the damage to the guides and the gears. Keep in mind that on the Ford Triton timing chain set up they incorporate the oil pump around the crankshaft timing pulley.

Whenever you're replacing a timing chain on a vehicle with more than 150,000 miles it's a good opportunity to freshen up the oil pump at the same time.

We gain a few advantages by purchasing the all-inclusive timing chain kits besides saving money. Not only do they include the chain and the gears they also include updated timing chain tensioners and guides.

They also include a gasket kit. Going with a complete timing chain set can help you avoid repeat failures down the road.

Since timing chain problems on the Ford Triton engine remain commonplace you won't have any problems finding a complete video walk-through on how to install these components. With that said. There are a couple of major takeaways about the procedure.

Before you open the engine up by removing the valve covers and the timing cover, blow all the sand, grit and dirt off of the engine. And then remain vigilant about keeping foreign material out.

My other piece of advice comes in the most critical area of the operation. You must get the timing exactly where it needs to be.

Timing the engine starts with putting the crankshaft in the correct position. They make a special tool for this. It slides over the key way in the crankshaft and then lines up with a threaded hole.

Nobody likes spending money on a special tool that they’ll only use one time. However, getting the crankshaft in the correct spot becomes critical to success.

If you’re doing these repairs yourself, you’ll save a lot of money. My recommendation is to use some of that money to buy the special crankshaft alignment tool made for the 4.6 L and 5.4 L Triton V-8 engines.

In 2004 when Ford launched the Triton modular V-8 engine design I thought it seemed ambitious, but well thought out. This new design reduced the amount of parts cast and the ability to use the same part numbers across different engine sizes.

Unfortunately, when vehicle manufacturers make major changes like this it's often the consumers that pay the price.

The interesting thing about the Triton V-8 engine is they can log over 300,000 miles or more. An impressive accomplishment for any gas engine.

The problem with the Ford V-8 engine becomes the downtime and repair costs all the way through the ownership cycle.

Often people ask me if it’s worth replacing the timing chain on a Triton V-8 engine with more than 150,000 miles showing on the odometer. This must remain a judgment call on your part. 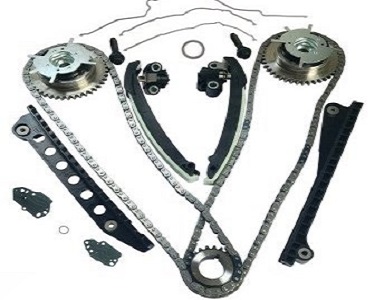 However, if the engine was well-maintained and you've already put a bunch of new parts into it, you can make an argument for pulling the trigger on a complete timing chain kit replacement operation.

We filed this engine timing chain article in the miscellaneous car repair area.

There you’ll find additional car and truck repair stories covering F150 common problems like the power window switch issue and how to repair the door latch cable on a Ford truck. You can also visit the fix my old ride home page for more information about the website.