When the car AC clutch won't engage you turn on the air conditioning and patiently wait for cool air that never comes.

You probably felt something a little different when you requested AC from the control panel. When the compressor kicks on you can usually hear a click and feel the engine struggle with the extra load.

Manufacturers do their best to mask both of these symptoms of a properly operating air-conditioning system.

However, you can still kind of feel when the compressor is kicking in even on newer cars. Popping the hood with maximum air-conditioning selected often reveals the problem of the car AC clutch not engaging.

Although the belt driven pulley is spinning you can see that the front of the compressor unit is not turning with the engine.

That front plate connects to the compressor driveshaft and should be engaged against the pulley in order to operate the compressor. Here we'll discuss some of the common causes of a car AC clutch not operating properly. 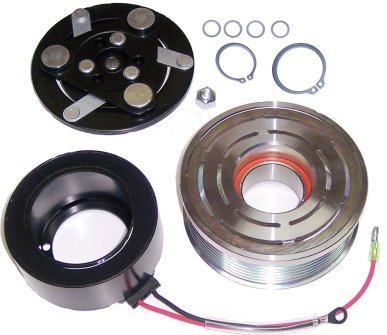 In order to figure out what's wrong with the car air-conditioning system we need to understand what happens when we engage the compressor from the AC climate control panel.

As you can see from the image on the right we have three separate pieces that need to operate correctly to engage the compressor.

The front piece is the compressor clutch assembly that connects to the driveshaft. The middle section is the pulley that is driven by the engine drive belt.

This turns into an audible click sound. Some automobiles provide a lot of insulation in the engine compartment.

Therefore, it's necessary to open the hood and have a friend turn on and off the air conditioning to physically see if the clutch is engaged. If it's not, continue reading in the following sections to uncover some common causes of a car AC clutch that won't engage. 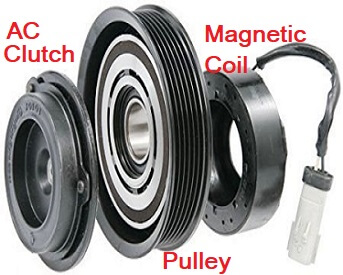 Where to Start AC Clutch Diagnosis

When I see an AC clutch that won't engage I start by examining the compressor's electrical connector. The AC compressor generates a lot of heat and vibration.

All too often this powerful combination can take its toll on the electrical connection. You can even try wiggling the connector to see if the AC clutch turns on. In the next step we verify that voltage and a good ground exist.

Although car air conditioning remains a vastly complex system the connection at the electromagnet that engages the compressor remains a one, two or three wire connection.

Note that on a one wire system they use a case ground for the electromagnetic coil. The integrity of this ground requires inspection on these models.

If you have a 12 V request signal and a good ground, then the problem resides in the compressor area. With that said, failure of the electromagnet that engages the compressor driveshaft remains few and far between.

Nevertheless, a few automobiles are prone to problems in this area. As an example, the Honda Civic and Honda Accord cars of the late 90s and early 2000 model years fall into this common failure category. Learn more about Honda VTEC problems here.

In fact, compressor replacement parts come in at reasonable prices due to demand for these units. However, it's more likely to find a lack of AC request signal at the compressor connector when the compressor fails to kick on. 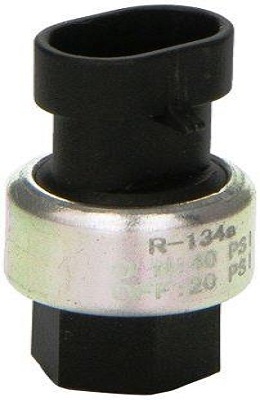 As mentioned in the first step in diagnosis you usually find the reason the compressor won't kick on stems from its not receiving a power signal. Although the possible causes form an extremely long list, we're fortunate that several common issues cause more than 75 percent of the problems.

Let me throw out the best case scenario first. Failure of the air conditioning relay becomes something that you'll find on aging automobiles. On a 10 year old vehicle with 100,000 miles there's a good chance the relay failed.

Again, this becomes somewhat model specific. Jeep and Chrysler cars and trucks experience more failures in this department than other automobiles. I have a detailed article about testing the car AC relay and I hope this represents your problem.

By far the most common failure found when a car AC clutch won’t engage is low refrigerant. You can find out how much Freon remains in the system with an inexpensive air conditioning service. The refrigerant carries an oil charge that lubricates the compressor.

If the Freon leaks out so does the lubrication. The manufacturer uses a low pressure cutout switch to prevent damage to the internal workings of the compressor. These pressure sensitive switches can fail. It's tempting to jump this low pressure switch to test this theory.

You should never do that. If enough Freon leaked out the compressor will run in a dry state. And just kicking it on can prove disastrous. When a compressor self-destructs from lack of lubrication it turns into one of the worst AC repairs possible.

The way to handle this is to connect a set of air-conditioning manifold gauges to the high and low pressure test ports. If the low pressure side reads below 20 to 40 psi there isn't enough refrigerant to engage the compressor.

At this point many will just throw in a can of Freon and the system might operate for a while. However, if you find the system with low Freon levels this means you have a slow leak.

How long the recharge lasts becomes an indication of how serious the leak is. People are often tempted to throw a can of leak sealer into the AC system. This is another area that I covered thoroughly. See my opinion on how well air-conditioning stop leak products work.

Some automotive manufacturers are too smart for their own good. They take a complex system and make it even more complicated. These automakers send an AC request signal through the car's main computer.

Although the reason behind it remains valid, the implementation represents a weak link in the chain. In other words, a bad ECM can cause the air-conditioning not to work. In other cases, car designers built in an AC request signal that's generated from the climate control panel or body computers.

After testing the areas mentioned above it might be time to turn your attention to model specific common air conditioning electrical problems. As an example, here's a link to an article about Chevrolet computer problems that stops the air-conditioning from coming on.

Here at fix my old ride we dedicate a section to diagnosing and repairing car electrical problems. In addition, we dive much deeper into fixing old car air-conditioning systems and the common problems associated with them. Finally, if you're interested in other automotive topics, visit the fix my old ride homepage.