We base the worst AC problems listed here on the cost of parts and labor. And the difficulty of getting the problem fixed on the first visit to the auto repair shop.

Running short on time? Scroll to the bottom to see the biggest problem car air conditioning systems can have.

When you review common AC issues in older cars there's no question that a slow Freon leak, allowing the refrigerant to escape over time takes the No. 1 position from a failure rate point of view.

However, it isn't the worst AC problems that can happen to your ride in the air conditioning department.

Since I can't guarantee that we will nail down and solve your car's air conditioning problem on this one page, I want to remind you of two areas to find further assistance on this website.

You can head back to the introduction page of the fix my old ride air conditioning section.

There you'll find more articles about individual issues common in automobiles 10 years of age and older.

Let meet point out the most popular post in that section. We wrote an article about a common failure with an automotive air conditioning relay.

This represents one of the best possible scenarios for car owners with a repair cost in the $15 range.

We also cover high mileage car topics on vehicles with more than 100,000 miles on the odometer.

In addition, you can head over to the help section located on the right sidebar and visit the ask a car mechanic now information page.

The Cars AC Evaporator is Leaking 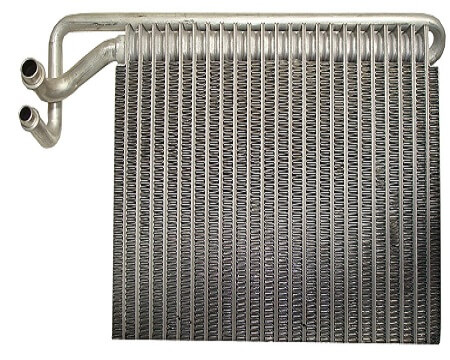 One of the reasons the AC evaporator makes this worst AC problems list is thanks to its location. When you pop the hood or crawl under the dash you can’t see it. This is because it makes its home in the heater case.

It's often located nearby the heater core, yet another part you can’t see. Although a few vehicles offer easy access to the component, the large majority of them are extremely difficult to remove.

Another issue with diagnosing a bad evaporator is when the leak is small. Since it's hidden from sight it's hard to get a Freon leak detector near the coils to test for refrigerant leaks.

When the evaporator starts to leak heavy you can often put the sensing probe of a Freon leak detector right into the duct work and the alarm on the tester will sound. This is a sure sign the part has failed in a big way.

Another reason that automotive air conditioning evaporator issues are more common on older cars again relates to its location of installation.

The part generates a massive amount of moisture. Condensation falls off the coils and into the heater case where it exits outside of the automobile.

This is where the puddle of water comes from when you run your car air conditioning on a hot summer day. Over time the drain port can become clogged in the heater case and allow the evaporator to sit in a bath of water.

This allows the part to slowly rot away. Leaks often start off small and grow larger over a long period of time. As I mentioned some models make it hard to replace this part. In fact, on a lot of automobiles, you'll have to completely remove the dash assembly to gain access.

Automobiles packed with antiquated technology, like a BMW 7 series, make a hard job one of the worst AC problems you can have.

Also note that many Chrysler products have evaporator problems from the mid-90s and Dodge Ram Trucks from early 2000 were susceptible to evaporators rotting away from sitting in a puddle of water. 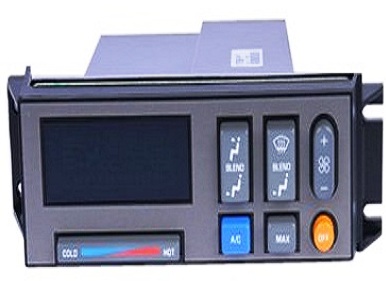 The idea behind the electronically controlled climate system is to set the dash mounted control for the exact temperature you want and the magic modules handle the rest.

If you set the desired interior temperature to 70 degrees the blower speed and temperature blend doors automatically adjust to deliver your request. This is meant to operate like the thermostat in your house.

They started installing climate control systems in Cadillac products and other luxury cars in the early 80s. These are some of the worst systems you’ll find in the climate control category.

As time marched on they became more reliable, but every few years they also became more complex. The trouble really began when the AC control panel module took over engaging the air conditioning compressor.

They used a variety of input sensors to make this decision on when to send passengers cold air. Internal and external temperature sensors, high and low side pressure sensors help the module make these decisions.

Failure of any of the sensors or the control module itself renders the system inoperative. To make matters worse commonly defective parts for certain models may have only seen the light of day for a year or two. This makes diagnosis and repair difficult.

Although there's nothing wrong with visiting some auto repair forums specializing in that automobile, in the end it's the older dealership technicians that have the best insight on what's wrong with an old climate control system.

Unfortunately, taking your old car to a new car dealership service department can be an expensive venture. Another issue is spending more than the book value of the entire automobile to get your AC system up and running again. 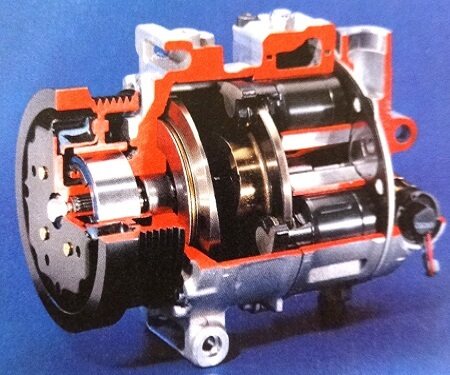 Actually it's internal compressor failure that's the worst AC problems to have. A quick review of how the compressor works on an older car will help us understand why the problem is so diabolical.

On older AC compressors the internal components looked very much like a small engine inside. The pistons are driven by the engine belt and pulley.

As the name suggests these internal pistons compress the refrigerant. In fact on a hot summer day pressures on the high side can exceed 350 psi. These compressors turn over fast and work hard.

Once they get over 150,000 miles on them it's just a matter of time until they develop problems. If you're lucky the compressor will have external problems requiring replacement before the inside disintegrates.

The reason an internal failure is such a big problem is because the little metal chips created are pushed throughout the entire AC system.

We lubricate the compressor using an oil charge that mixes with the Freon. This means an oily film lines the entire inside of every nook and cranny. The metal chips stick to this oil and resist removal.

Fortunately, a lot of the ground up metal debris winds up caked on the orifice tube inlet screen since it's the only filter in system. However, If these little tiny pieces work their way back to the replacement compressor they will destroy it.

This is why an internal compressor failure is the worst AC problems. Replacement units are covered by a warranty.

However, if the manufacturer finds that debris from the previously installed unit is what destroyed the new one they will not cover the part due to incorrect installation procedures.

Mechanics do their best to flush the system with a specialized cleaner. Despite their best efforts just a few chips hiding in the corner of a condenser assembly can work their way loose down the road and cause repeat problems.

Not only is a compressor replacement expensive from an auto parts and labor point of view, but it often leads to additional visits to the mechanic to fix ongoing problems.

Diagnosing a slow leak situation remains challenging for even the most skilled technicians. You'll need an abundant amount of patience to fix this type of AC problem.

On cars less than 10 years old the most common of these leak points comes from an O ring seal often found on the high pressure side of the system.

Although this is also a common occurrence on vehicles from 15 to 20 years old the list of possible causes gets a lot longer.