Will  car air conditioning stop leak work for you? Lets find out and discuss the pros and cons of using stop leak product in automotive AC systems. Many people with older rides give up when the AC stops working, because these repairs cost so much.

In fact, it's not uncommon for a repair estimate to exceed the total book value of an older automobile. With that said, you can repair a leaking Schrader valve for under $50.

This is why it's important to find out what's wrong. Then make the decision to repair or not. When you finally do sell your old ride, an operating air conditioning system increases the value and could close the sale on a hot summer day.

With the reasonable expense of car air conditioning stop leak it's tempting to go ahead and throw a can in the system and see if it solves all your problems. In this brief article we're going to discuss the pros and cons of doing so. If you hunt around on the Internet you'll find people talking about how the stop leak products ruined their AC system.

We'll tackle this real problem so it doesn't happen to you. More importantly, we're going to talk about inexpensive and reliable ways to locate where the Freon is leaking from. Then we'll talk about a commonly overlooked area that’s difficult to check for a refrigerant leak, how to diagnose and fix it without recovering the system. 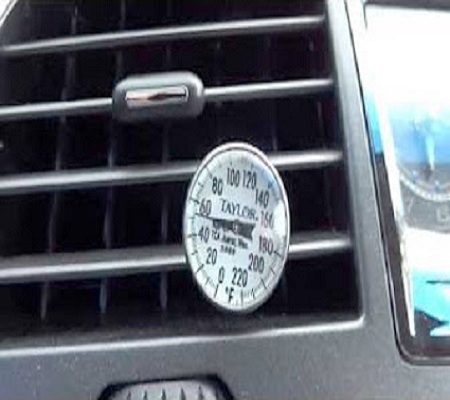 As a mechanic, I can tell you that I generally don't believe in any kind of product containing the word stop. I don't use car air conditioning stop leak on my own rides, because I own the tools to fix it right.

With that said, there's some science in the product and it can work. Nevertheless, I would rather see you diagnose it and then repair it permanently. however, if the automobile has a slow leak and it happens in an area where these stop leak products work well, then there's a chance you'll get lucky.

There are a couple of things different about this product I wanted to highlight because there's no shortage of these types of miracle fluids. The first thing to take notice of, is the can is only 4 ounces.

In a lot of cases where you see people talking about how a stop leak product ruined their car air conditioning system, it's because they installed way too much of it. We'll get into some other problems below, but this is a valid concern for do-it-yourself AC mechanics. 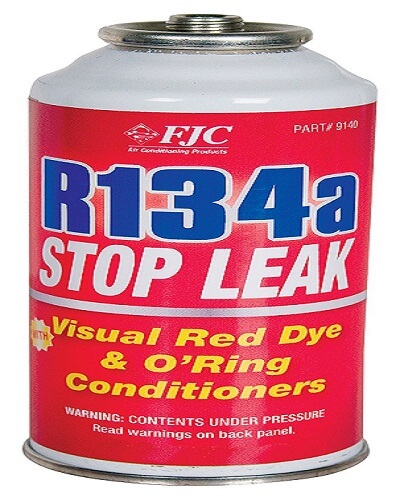 The AC stop leak additive contains a sticky glue like substance that finds it's way into a small leaking area to seal it up. Most car air conditioning systems have an orifice tube that is by its very definition a small hole that meters Freon. Cars and trucks can also use an expansion valve to meter refrigerant.

If you load it up with stop leak and don't run it long enough, you can plug this hole and the air will never get cold until you replace the clogged component. The other thing about the 4 ounce can of FJC car AC stop leak is it contains a red dye that you don't need a UV detector to see.

I do prefer the UV systems and I'll get into that below. However, for a reasonable amount you can give a 4-6 ounce shot of stop leak plus dye combination a try. If you have a leak, maybe you can try to find it by searching down the red spots. With that said, running the vehicle and driving it helps to distribute both the dye and leak sealer through the system. It's an important step that should not be skipped.

How Much Car Air Conditioning Stop Leak to Install

How much do you put in? Well a lot of people say that the 4-6 ounces is not enough to find or seal a leak. This is a good point. It actually depends on the total capacity of your air conditioning system. The newer systems only hold about a pound. Vehicles from the 90s through 2010 use a pound and a half of Freon when fully charged. In this case 6 ounces is enough.

However, older automobiles can hold as much as 3 pounds of refrigerant when fully charged. Sport-utility vehicles and vans with rear air conditioning systems can hold twice that amount. My point is, find out how much your system holds and if it's more than 32 ounces you might want to get two cans totaling 8-12 ounces.

Another complaint I see often is that a lot of the dye remains in the can at the end of the charging procedure. You have to shake the can of AC stop leak before and during the charging cycle. You also need to hold the can above the Schrader valve connection to allow gravity to flow the red dye into the system.

I'm saying this twice because, it's important. Run the air conditioning system on maximum cool for a good 20 minutes or a half-hour. Then take the vehicle for a road test with some twist and turns to provide an opportunity to distribute evenly.

If you add the car air conditioning stop leak and only run it for a few minutes you run the risk of plugging the air conditioning orifice tube as discussed above. Also note that when you're dealing with a nearly empty system you might have to add an additional can of regular refrigerant.

These air conditioning systems have pressure sensors that protect the compressor from coming on with a low charge. Adding 4 ounces might not be enough to keep the compressor clutch engaged. This depends on how much Freon leaked out before we started adding stuff.

There's a chance that everything could go your way and one single can could solve all your problems. However, it's not likely to happen that way. The can says it includes an O-ring seal conditioner.

In my professional opinion, when I find an air conditioning system leak on a car, it’s from an O-ring connection more than 50 percent of the time. What happens is these joints loosen up and flex. They can cut, wear or damaged the O-ring. And the only way to fix it becomes to recover the refrigerant and replace the damaged O-rings.

Thinking that a magical additive in a car air conditioning stop leak product will renew your O-ring good enough to seal the leak is a stretch. The most common problem with installing a single 4 ounce can of stop leak remains it won't work. If you install too much stop leak or you don't allow it to distribute evenly throughout the system it could clog individual components.

There's another situation to discuss before we move on. If you overcharge the system in an attempt to work more stop leak into the refrigerant you could do a lot of damage. A further explanation is that when you overcharge a system you can force liquid refrigerant into the compressor inlet.

This will destroy a healthy air conditioning compressor, because you can't compress a liquid. There’s usually a buzzing sound from the compressor before it actually self destructs.

If you turn it off soon enough maybe you can save yourself from creating the worst air conditioning problem an automobile can have. The other thing I've seen people do is overcharge it to the point where the high pressure blow off valve allows the overcharge to escape into the atmosphere.

Venting refrigerant remains bad for the environment and it's not good for humans either. Refrigerant can cause skin damage in the form of frostbite, but it can also cause permanent blindness if you get it in your eyes. As a professional I can tell you that I will not approach a car air conditioning system without safety glasses and work gloves and neither should you.

My final thoughts about installing car air conditioning stop leak designed for an automotive system is you probably shouldn't do it at all. Why do I say this? Because the total amount of refrigerant in the system becomes critical to its ultimate performance. Six ounces too much or too little causes improper cooling.

You must remove all the refrigerant and weigh it to receive an accurate measurement. Unfortunately, you need a charging station to do this. Finally, this brings us to the right way to stop an automotive air conditioning refrigerant leak.

The Right Way to Stop a Car AC Freon Leak

Instead of installing car air conditioning stop leak try one of the following methods. On the right you see a picture of the master cool professional grade refrigerant leak detection system. This is a UV dye type leak detector.

Note that you can also use it on other automotive systems as long as the fluid contains the fluorescent dye designed to operate in that system. They make different dye for coolant systems, engine oil and hydraulic fluids.

Although this professional system costs a little more it works well and it comes with everything you need in a handy storage box. The key component is the AC dye injector that's used for automotive air conditioning systems. Professionals first recover the remaining refrigerant and then store it for installation after they inject the dye.

Next, you remove the Schrader valve and physically pump in the right amount of fluorescent dye into the AC system. This becomes another area where you don't want to install more than the recommended amount, measured in ounces.

Although it's not as sensitive as the leak sealing products it can change the cooling characteristics of the refrigerant if you install way too much. After completing the florescent dye injection we install a full charge of Freon.

Next we kick the system on by engaging the compressor and circulate that fluorescent dye. I'm one of those mechanics that believe it's necessary to take the vehicle on a road test with a lot of twists and turns so that the liquid dye can slosh around in all of the corners of the system.

When you return from the road test you can pull out the specialized glasses and the black light that triggers the illumination of the crystals in the fluorescent dye. These systems work well at all levels of natural light. However, the darkness of an enclosed area like a garage makes the leak even easier to detect.

The Schrader valve is a patented device with a spring-loaded seal that allows us to add refrigerant, stop leak and detection dye to the system without losing any of the refrigerant. It's an amazing little device that’s also used to hold the air pressure inside automotive and bike tires.

This becomes an overlooked area where Freon can leak out of the car. The device can loosen up and leak tiny amounts of refrigerant over long periods of time. Using the leak detection methods discussed on this page doesn't work for the AC Schrader valve.

A lot of times when mechanics say they can't find the leak it’s because they didn't check the air conditioning Schrader valve with a halogen type leak detector. This sniffing device sounds an alarm when it senses different types of refrigerant. Since Freon remains heavier than air, you actually have to place the sensing probe below the valve not above it.

Unfortunately, this isn't a do-it-yourself repair unless you get the special tool from master cool. You can't just remove the Schrader valve, because all of the refrigerant vents into the atmosphere. This means you’ll have to recover all the Freon before you replace the Schrader valve. The master cool special tool allows you to replace the valve without losing any refrigerant. This thing only cost around 36 bucks.

Head back to the AC start page and learn more about how to fix the air conditioning on your old ride.