People asked me if older cars have bad AC systems. My general answer is yes, they do. Like anything, as time marches on technology improves how these systems operate.

Here we'll dig into some of the major improvements, car manufacturers deployed in automobiles throughout the last couple of decades.

This air-conditioning article isn’t meant to be a lecture or a history lesson. In fact, this post guides you to an automobile with a more reliable air-conditioning system installed from the factory.

We’ll talk about when they changed from R12 refrigerant to the R134a environmentally friendly Freon and the fallout from this changeover.

However, one of the biggest advancements that I can think of when it comes to automotive AC systems is the deployment of variable displacement compressors.

If you're in the market for a old yet reliable automobile this is something you need to know about.

Why did Car Air Conditioning Change

Back in the old days, as mobile air-conditioning became more of a necessity than a luxury, car makers knew they had to make the systems more affordable and efficient.

They have done a pretty good job of this since most automobiles manufactured in the last 20 years have factory installed AC.

However, as we learned in the fix my old ride air conditioning section just because the system is mounted on the automobile doesn't mean it operates properly.

Nevertheless, when these bad AC systems refuse to blow cold air we can track problems back to the compressor itself.

So before we get into the different types of refrigerant let's discuss the advancement of the automotive compressor. 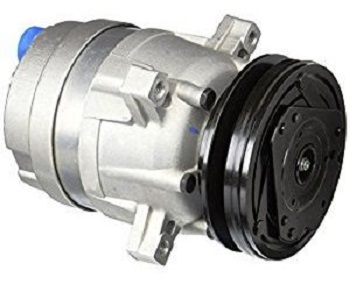 Let's get the definition of a variable displacement AC compressor out of the way. These belt driven air-conditioning compressors have the ability to change how much Freon they compress on demand.

On automobiles, older than 1985 the compressor was either on or off. Another problem with the old compressors is they moved too much Freon at high RPM and not enough at engine idle.

This could cause discharged air to warm up as the vehicle sat in traffic. Regardless of the conditions, the old-style air-conditioning compressors drained horsepower and fuel economy from the engine.

Now we can turn the compressor on and modulate how much power it drains from the engine according to the demand of the air-conditioning system.

They do this through an ingenious compressor design that uses a wave plate and springs. This automatically adjusts how hard the compressor works on the fly.

In 1985 AC Delco launched the V5 variable compressor. That first year wasn’t the most reliable. I'll even say you could call it a bad AC system improvement.

With that said, by the following model year and through the early 90s, they became some of the most reliable compressors on the market.

The ingenious part about this design is they control the angle the swash plate rotates at using a solenoid.

This allows for the variable stroke of the compressor pistons and precise control of the solenoid through a pulse width modulated signal.

In the end, variable displacement AC compressors provide better fuel economy and engine power than the old school axial compressors of the past.

If your automobile is equipped with a variable compressor turning it off on a hot day will make you sweat. However, it won't improve your fuel economy or engine power as much as it did on your father's 1979 Chevrolet Caprice station wagon. 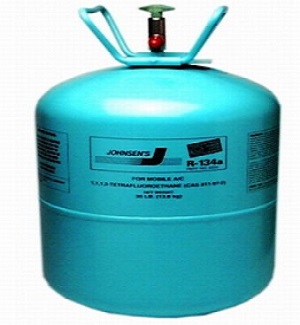 When it comes to air-conditioning systems the older ones seemed to get colder. This wasn’t a figment of your imagination.

The old-style R12 Freon produced air temperatures about 5 to 10 degrees cooler than an automobile equipped with the newer R134A refrigerant.

I miss the frosty car air-conditioning systems from back in 1993. However, I’m also a big fan of the ozone layer.

The old-style refrigerant eats away at the ozone layer when it escapes from an automobile. They consider the most common refrigerant found on vehicles built in the mid 90s and 2000's friendlier to the environment.

Therefore, you must know what kind of refrigerant exists in the system when diagnosing an automobile from the early 90s.

Vehicles converted from R12 to 134a require an under hood label and pressure fitting adapters. This indicates the completion of the conversion.

A little bit of this stuff goes a long way. When you install too much it has a negative effect on the output temperature.

Finally, learn more about the mobile refrigerant transition. The EPA website provides detailed information about why they mandated these changes. It’s actually an interesting read.