I'm becoming an expert on the Chevrolet Silverado tailgate repair. Not because I'm smart or talented it's because practice makes perfect.

I see my share of Chevy Silverado trucks from 1999 through 2007. They say that Ford pickup trucks are the best selling trucks in America?

With that said, in my town there’s more Chevy trucks than any other vehicle. We have a local Chevrolet dealer that spends a lot of time and effort supporting the community.

Fortunately, these General Motors trucks can last a long time and log a lot of miles. Unfortunately, they remain troublesome all the way through their life cycle.

I've written about some smaller problems like the Chevrolet headlamp switch, the Chevy Silverado daytime running lamp and the GM brake switch problem.

As these trucks continue to age we are starting to see some other weak spots develop. Not surprising, since the tailgate remains exposed to extreme weather situations.

It also see's heavy duty use, hence why this problem is keeping me busy lately. There are three separate things that cause the tailgate to become a headache to operate.

First we have the issue that prevents the tailgate from unlatching when you operate the handle. Although this often turns out to be some broken nylon clips, we recommend replacing the handle assembly with a new part.

In addition to the Chevy tailgate door handle issue we're starting to see the hinges rust out. This makes an excellent case for just getting an all inclusive tailgate repair kit.

In extreme cases when the hinge completely disintegrates the tailgate can start to fall off the back of the truck. However, one of the biggest problems is when you attempt to put some load on that tailgate. 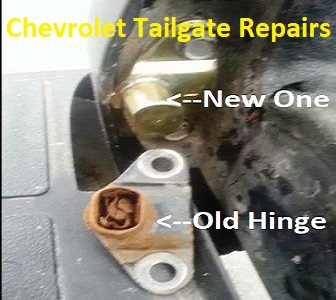 This can crumble already weakened rusty hinges. So before you use that tailgate for tailgating let's talk about how to perform the complete Chevrolet Silverado tailgate repair.

We'll cover tips and techniques that help you replace the tailgate release handle without breaking the bezel tabs on the new part.

In addition, we'll cover a few tips and tricks for replacing the tailgate hinges on Chevrolet Silverado models from 1996 through 2007.

Finally, we talk about the striker issue. This becomes a major problem when people put off replacing the rusted hinges.

If you find yourself slamming the tailgate harder and harder to get it latched closed then this will help you. 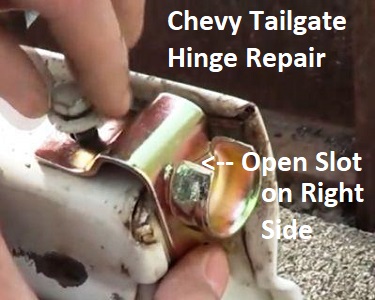 How to Remove a Chevy Tailgate

Chevrolet painted the original steel hinges in an effort to reduce corrosion. With that said, they failed to use galvanized parts, probably because of the additional expense.

The good news is that the replacement kits available come with hinges that should far outlast the truck. How much does a Chevrolet tailgate weigh?

I checked the shipping weight on a new tailgate and it said the part weighed in at 75 pounds. For this reason, removing the tailgate might be considered a two-man operation.

The next question is how does the tailgate come off of a Silverado? First you have to disconnect the tailgate straps.

The cup on the right side or passenger side of the truck has a slot to disengage it from the post. From the fully open position you raise the tailgate about 25 degrees and pull out to unhook it from the hinge.

After disconnecting the passenger side hinge you can maneuver the tailgate to disengage from the driver side post.

When you remove the hinge parts from the truck sometimes you find a shim plate. In some cases you'll reuse that shim plate after cleaning it off.

In other cases if the tailgate binds when you put it all back together, you might have to take the shim plate out.

When you install the posts on the truck they are marked left and right. The left side always goes on the driver side of the truck.

Note that when you replace the hinges on the tailgate itself, you often find rust in the corner of the tailgate. This becomes an excellent time to remove that rust, primer and repaint those areas.

In extreme cases you might have to use some Bondo or reinforced body filler. Now you can put tailgate back on and reconnect the cable straps.

This also might be a good time to replace those tailgate cables since they carry a price tag of about $15. It's the cables that actually support the weight placed on the tailgate when it's open.

The handle and latch assembly seems to be a common problem when these trucks hit about 10 years of age.

You walk up to the tailgate and pull on the handle and it won't open. To gain access to the linkage you pry off the old bezel that surrounds the handle. This plastic part will probably break during the process.

What you often see is that one of the nylon clips holding the rod to the latch has disintegrated. You can grab a pair of pliers and operate the rod manually to open the gate.

However, this will not be something you want to do every time you want to open the tailgate. Although a few people might opt for just replacing the clips that hold the rod to the latch, I recommend replacing the whole thing.

The plastic handle and metal parts seem to deteriorate in their own ways. The plastic becomes brittle and unreliable.

The metal components of the release handle start to rust, because they ride on the outside of the truck. With a new Chevrolet tailgate release handle costing around $15 why not treat yourself to a new part.

Replacing the handle is straightforward. It's held on with three 15mm bolts. The question becomes how to install the surrounding trim piece without breaking the tabs on the new bezel.

First you have to make sure you clean all the old sticky tape off of the tailgate. When you install the new bezel the bottom tabs go in first.

Believe it or not there is still one remaining issue that you might run into on a Chevrolet Silverado tailgate. The strikers and latches can take a beating when the hinges wear out.

This is because people will slam the tailgate shut, trying to compensate for the sag created by the rusting hinges. The strikers have nylon collars on them that won't hold up to this type of beating for long.

After the nylon starts to break apart you can experience some damage to the latches. In other words, you are best served by replacing the tailgate hinges on your Silverado before they start to rust out. Here are a couple of tips in case you have to replace the latch strikers.

Like most General Motors strikers they use a Torx head configuration. The size is a Torx 41. The idea is that when you break the striker loose that the nut on the other side of the body panel is tack welded to hold it in place.

Unfortunately, sometimes this breaks loose and you can’t get striker out. This means that you have to remove the taillight assembly and find a way to hold the broken nut on the other side.

We filed this Chevrolet Silverado tailgate repair article in the miscellaneous car and truck repair section. You can also get a run down and mission statement on the Fixmyoldride.com homepage.

If you own an older Chevrolet Silverado or GMC truck take a look at this article about failure of the ignition switch. It's a common problem with GM vehicles that's increasing in size and scope.