In my opinion the Chevy hood release handle installed on thousands of Chevrolet vehicles from 1995 through 2006 falls into the category of a substandard part.

Vehicle manufacturers often find themselves pushing the limit on how thin and lightweight, they can make any given plastic part.

They even used plastic manifold gaskets on Chevy V8 engines that's now becoming a big issue. Sometimes these companies push it too far and go with a part that won’t last as long.

For this reason your factory installed hood release handle will probably need replacing at some point. With that said, you still must perform a detailed inspection of the hood release cable and the hood latch assembly.

In many cases when a hood release handle fails to open the engine compartment we find a seized or rusted cable. In other situations we find a hood that changed position from external damage.

In other situations we find that the hood release latch becomes susceptible to rust, corrosion and binding, because it's not properly maintained.

The light weight Chevy hood release handles the factory supplies will only open the hood if everything is working as per design intent. Any binding at the latch or in the cable can cause the handle to fail prematurely. 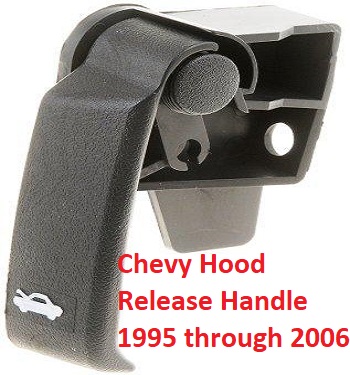 It's not unusual to find a Chevrolet truck with a broken hood release that requires nothing more than replacing the handle.

With that said, you should still verify the proper operation of the release cable and latching assembly.

Unfortunately, when the hood refuses to open the driver often finds themselves in a situation where they need to get under the hood immediately.

Whether it's to check the engine oil level or the other vital fluids sometimes we just need to get inside the engine compartment.

However, when the handle breaks it fails to pull on the release cable to operate the latch. Sometimes concerned drivers will try to grab the cable with a pair of pliers in an attempt to open the hood.

This process can damage the hood release cable. Now you're in a situation where you have to replace the cable and the handle when all it originally needed was the $10 plastic handle part.

When you add the additional expense of a new cable this pushes the parts cost into the $40 range. Plus you'll also have to spend the time to run the cable from the latch mounted out on the radiator support and run it through the firewall to the hood release handle.

Although this isn't the end of the world it's disappointing when you have to go through this extra part and labor expense, because you destroyed the cable using a pair of pliers. The hood release handle itself is only held on by one screw and makes for a perfect do-it-yourself auto repair.

Although the Chevy hood release handle remains the most common issue other problems can exist that force the plastic handle to fail. Binding of the hood release cable and problems with the hood latch assembly remains two possible causes that require investigation.

When you take a brand-new hood release cable and slide it from end to end there’s virtually no resistance. This is an inexpensive two-piece steel cable with an outer plastic cover. One of the most common reasons for the cable to bind is when damage occurs to this outside protective plastic sheathing.

I've seen these cables damaged in several ways. However, the reason I see most often is from light body damage where the hood release cable gets damaged in a minor accident. Since the cable runs from the front radiator support and down along the fenders, these areas become susceptible to accidental body damage. 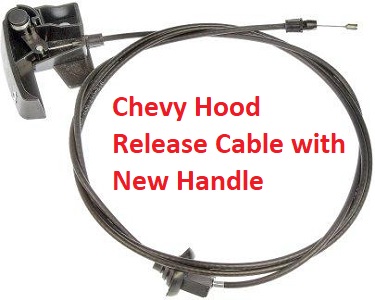 Here's how you diagnose a bad hood release cable. You have to take the cable loose from both the handle and the latch sides at the same time. If you already have a broken handle the first step is done for you.

The question becomes how do we open the hood to gain access to the latch when the hood won't open from the release. Here's a video on how to open the hood from the outside on a Chevrolet Blazer. Once you get the hood open you'll be able to take the cable loose from the latch mechanism.

With both sides disconnected the inner metal core of the cable should slide with no effort at all. If there is any binding or resistance when operating the hood release cable this part needs replacement. I've seen people try to work lubricant inside of these cables to get them to operate smoothly again. This becomes a short term solution and therefore I don't recommend it. 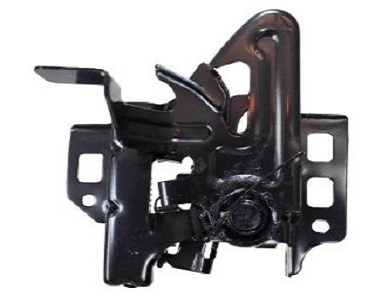 The hood represents a massively large and heavy body part. When perfectly aligned and lubricated the release and the latch assembly works well.

However, as the hinges start to rust along with corrosion buildup on the hood latch mechanism things start to bind.

When the binding leads to misalignment the striker on the hood can start to damage the latch assembly mounted on the radiator support.

This is a situation where you find people slamming the hood harder and harder in an effort to make sure it's latched completely. This extra effort just snowballs the deterioration of the related components.

I recently worked for a large government fleet that deployed hundreds of vehicles using the Chevy hood release handle outlined in this article.

When we launched a lubrication program, failures of the hood release handle just about disappeared. The enhanced hood maintenance program included lubricating the hinges, return springs and hood latch assembly.

In addition, we would adjust the rubber bumpers and verify the proper alignment of the hood. This reduced the need for slamming of the hood and wrestling with the release cable and handle assembly.

In other words, your Chevy hood release handle will last longer if you properly maintain the latch, striker, and hinges and verify proper alignment of the hood in between the front fenders.

We filed this Chevrolet hood release problem article on the miscellaneous auto repair section. You can find related articles in that area covering Chevy Blazer motor mounts and some other common issues with General Motors trucks and cars. In the electrical repair section we show you how to fix Chevy ignition switch problems and how to repair the daytime running lights on your old trucks.