When I stumbled onto the Mercedes-Benz crankshaft position sensor problem I was blown away. When I performed some research on the issue I came across some interesting information about the engine design.

In fact, it provides a possible explanation of the root cause of failure. However, that's not what blew me away. For the first time in my life I fixed a Mercedes-Benz luxury car that wouldn't start for under $50.

On an automobile where everything seems to be over thought and extra expensive this common Mercedes-Benz crankshaft position sensor problem is neither of those.

Although you can grab the crankshaft position sensor parts below and move on, I'm hoping you'll stick around to hear what I learned from this repair. Below we cover how to confirm the sensor failed.

I'll also share with you some information that might influence you to purchase an additional crank sensor. That's right, I'm saying if you own a 3.2 L V-6 Mercedes-Benz engine, you could benefit from having an extra crank sensor around the house. You will certainly benefit by learning how to diagnose and repair this crank sensor problem yourself. 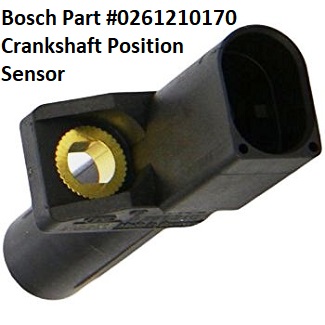 Let me share the hilarious part of this story with you right now. I discovered the crank sensor issue thanks to a friend with a Chrysler Crossfire.

They called me and said their car wouldn't start. I went over there with nothing more than my automotive scan tool. I'll talk more about the diagnosis below. To make a long story short, when I cranked the engine and pulled up the crank sensor data stream on my scan tool, it read zero RPMs.

This remains a simple and common failure. The crank sensor is not detecting the rotation of the crankshaft and therefore isn’t firing the ignition system.

I've seen this failure on all different types of cars, but the Germans are known for their superior engineering and I was a little surprised the crank sensor had failed on this 3.2 L V-6 engine with only 42,000 miles on it.

When we called the Mercedes-Benz dealer parts department they quoted a price of over one hundred dollars. For kicks we started to do an Internet search and found the parts were available for under $50 in multiple locations.

With that out of the way, we could buy a replacement Bosch crankshaft position sensor anywhere with the same part number. And we would still be installing original equipment parts. After a little more discussion they agreed and we got one for about $40.

When the crank sensor completely fails the obvious symptom is a no start condition. Stated in a different way, the engine cranks around fine, but it doesn't fire up. In fact, there is not even a sputter like it's trying to start.

This is because the main computer control module isn't receiving a crankshaft input signal. Without this data it doesn't know when to tell the ignition control module to operate the electronic ignition system coils to fire the spark plugs.

However, after talking to my friend with the 2006 Chrysler Crossfire with the 3.2 L V-6 Mercedes-Benz engine, they provided more information about the failure. The driver stated 60 days before it wouldn't start, they experienced intermittent extended cranking time.

In other words, this engine used to fire right up with the turn of the key. All of the sudden it would crank around for 20 seconds before it fired up.

The day before the complete failure of the Mercedes-Benz crank sensor the car cranked for almost a minute before it started. This became the last time the engine would fire up.

In other words, if you're about to experience the Mercedes-Benz crankshaft position sensor problem your car might give you some warning. With that said, I have also heard from people that had no prior warning before the car refused to start one day.

Modular design means that companies can lower their manufacturing costs by using the same exact designs across different size engines. Therefore, the 3.2 L V-6 engine is a 90 degree V-6 like the V-8 motor. The 90 degree aspect ratio is perfect for eight cylinders, but not so much for six-cylinder engines.

In my opinion the Mercedes-Benz crankshaft position sensor problem boils down to a naturally occurring vibration from the engine design. However, other mechanics that I respect believe it's the mounting location and improper insulation from heat.

Either way, this is why think you should have an extra crank sensor on hand and learn how to replace it yourself. Remember this is my own personal opinion from some research and working on engines for about 30 years.

I invite you to investigate this on your own and formulate your own opinion about why this crank sensor fails. I'll even do you a favor and give you a place to start your research. This Mercedes-Benz 3.2 L, 18-valve, SOHC V6 engine carries the M112 engine designation. So you can start digging using that info and see what you think.

Lots of cars including the Mercedes-Benz are known for having crankshaft position sensor problems. However, when failure of this component becomes suspected an automotive scan tool that reads the data stream is the easiest way to uncover the issue.

When the crank sensor starts to fail it often sets a diagnostic trouble code that points you directly in that direction. On the Chrysler Crossfire I pulled a check engine light code P0335 from the computer.

Nevertheless, when the crank sensor fails altogether you can pull up the crankshaft data stream. You crank the engine and see if the RPMs read in the 400 revolutions per minute or above range. If the answer is yes, it means the sensor is supplying data to the computer.

The automotive scan tool remains a handy thing to have around. If you own an older Mercedes-Benz I would make a case for getting a scan tool that works well on these precision German automobiles. Fortunately, this doesn't mean spending a lot of money.

Handheld automotive diagnostic tools have plummeted in price over the last five years. You can spend $50-$100 and get a nice tool to help diagnose check engine light problems on a wide range of vehicles.

Unfortunately Mercedes-Benz buried the sensor like it would never go bad. Therefore, it's not real easy to replace it. Another thing to mention is the single bolt that holds the crank sensor down is an odd shape and size. They consider this an inverted Torx bolt. Meaning you'll need an E-8 Torx socket.

I was able to use a 12 point SAE socket, but I recommend picking up an inexpensive external Torx set. With that said, this doesn't make the best first time do-it-yourself auto repair. The main reason remains its tight location on the firewall side of the engine.

It's on the driver's side, down low on the 90 degree V-6 engine near the transmission bell housing. The brake master cylinder, on some models and a bunch of other Mercedes-Benz parts, block a clear view of the crankshaft position sensor. The first time I did this repair it took me about an hour. 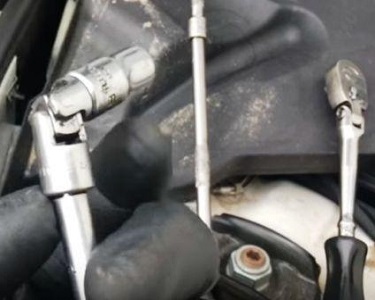 Tools to Replace the Crank Sensor

The second time I went at it with the right tools and I got it done in about 35 minutes. Here are a few things that made it easier the second time around.

I used multiple quarter-inch extensions to get the right length and a universal joint right before the E8 Torx socket. I stuff some butyl tape in the end of the socket to grab the bolt so it wouldn't fall and get lost in the engine compartment.

I recommend heading over to YouTube and type in your specific year, make and model Mercedes-Benz, followed by the words "crankshaft sensor replacement". You'll find a bunch of videos with tips and tricks to help you remove the sensor on your specific car.

After viewing the video you can make a decision on whether this falls within your do-it-yourself auto repair skill set. Always work on a cold engine and I also recommend wearing a pair of protective gloves.

Make Sure You Have the Right Replacement Part

Note that some of the replacement parts have a one instead of zero at the end of the part number. Always double check that the new sensor fits before installing it. You do this by plugging it into the harness. When you get the wrong parts the spacing is different at the connector terminals. Plugging in the new part assures you're installing the right one.