In this article we'll address fuel injector problems on Vortec V-6 powered cars and trucks. It happens to be a problem I resolved on my Chevrolet Blazer ZR2 truck.

The 4.3 L GM engine can last for a long time. If you stick with me to the end of the page I'll tell you how many miles you can get out of yours. Unfortunately, it can be troublesome all the way through the ownership cycle.

There are some important takeaways weaved into this article. First, you must know they make an updated replacement injector kit. It includes the manifold, plenum and throttle body gaskets needed to complete the repairs properly.

Another thing we'll talk about is a brief history of the 4.3 L Vortec engine. You'll know where it came from and why it deserves some respect. Also discover the first and second generation ignition control module failure problem. Finally, review a list of symptoms that helps you identify the failed fuel injector from other common Vortec V-6 issues.

Brief History of the Vortec V-6

The 4.3 L V-6 engine has been around for a long time. General Motors took their popular engine block casting used for the 350 and 305 cubic inch displacement V-8's and cut two cylinders off.

This gave them a smaller engine that still used all of the same accessories and parts. They could use the same engine mount, water pump, alternator and air conditioning compressor just to name a few.

This became a brilliant engineering decision for a company that struggled financially at the time. In the mid-90s the General Motors Corp. launched the Vortec V-6 series line of engines. They put the motor in millions of GM cars and trucks. If you pop the hood on a rear wheel drive General Motors Corp.

vehicle from the mid-90s through mid 2000 you will probably see a Vortec. The 4.3 L V-6 puts out good power in the 190 HP range. Engine torque remains impressive and much appreciated in the line of vehicles that utilize the rear wheel drive powerplant. 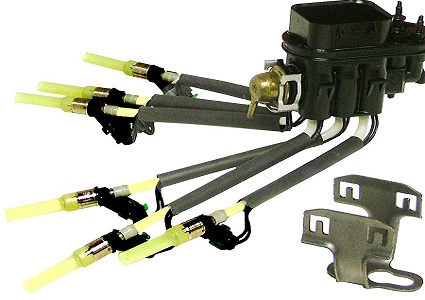 Unfortunately, this engine used a CPI (Central Port Injector) set up. We called it the spider, because of the legs and body that looked like a spider.

The CPI units worked well for years, but then they started having leakage issues. When it malfunctions unmetered fuel leaks into the plenum area and then gets sucked into the cylinders.

This situation causes an imbalance in the air fuel mixture. And this is why we have to replace the original one with an improved design kit. Remember the kit comes with all the gaskets you'll need.

The fuel injector itself is an upgraded CPI that will look different from the original equipment units installed on the factory assembly line.

The fuel runner tubes are now shorter with less slack and bends in them. This improves efficiency by allowing the fuel to take a more direct route to the intake valve. Reliability is also enhanced over the original parts.

The important thing to remember is you have to use the new bracket that comes with the new electronic fuel injector. Since the fuel runners are physically shorter the old bracket won't work on the new unit.

Even when you use the new style metal bracket the individual injector tubes are still a little bit of a struggle to bend and connect. Let the spider sit in the sun while you take things apart. The warm plastic is easier to bend.

One of the first things that will happen when the original fuel injection unit begins to fail is the engine will start to misfire. This could set codes in the P0400 range or individual cylinder codes like a P0406 might set.

However, the most common set code is a P0300 that stands for multiple and random misfires. Unfortunately, this problem is easily mistaken with another common 4.3 L Vortec engine issue.

Ignition misfires due to distributor problems, worn cap and rotors way past their maintenance guidelines can also set these codes. The symptom that sets the fuel injector issue apart from the ignition problem is the white smoke pouring out of the tailpipe from a rich engine fuel mixture.

Another complaint common with a leaky fuel injector is hard starting or long cranking time before the engine starts. Yet another symptom of a leaking CPI is when the engine runs better at higher RPMs and begins to run poorly at low RPMs and idle. This is because at the upper RPM range it’s able to consume the extra fuel that is leaking out.

As I mentioned at the beginning of this article I would provide some insight on how far these engines will go when professionally maintained.

I worked for a local government fleet that ran a hundred S-10 pickup trucks powered by the Vortec V-6 engine. Several of these trucks made it over 340,000 miles.

To my knowledge the one that took the prize actually made it to 347,000 miles before they retired it. Note that even though the engine lasted that long they all required a lot of work to get there. The 4.3L V-6 engine is strong with its cast-iron block and proven engine design. The Vortec plastic distributor assembly, not so much.

It's the same time tested design used by the small block V-8 350 Chevy that has been around since the 60s. However, it’s now covered with technology that is troublesome to say the least.

Many of these S-10 pickups made it over 300,000 miles. However, some of them had three transmissions, five water pumps and two ignition control modules replaced. And none of them went to the junk yard with the original starter motor.

In closing, I'll include (below) some of the common maintenance items often overlooked on the 4.3 L Vortec V-6 engines. The part on the end is a mass air flow sensor which is another common problem. If you want to make a run at 300,000 miles with your engine, you'll have to keep up with the scheduled maintenance and tuneup items like we did at the local fleet shop.