I'm dedicating this page to the orifice tube used in automotive air-conditioning systems. The reason is this device becomes real important on medium and high mileage automobiles. The filter screen shown in the graphic can clog and restrict flow.

Here we'll explain exactly why, what to look for and how to replace the least expensive A/C component in the entire system. One thing to get out of the way is this part becomes the dividing point between the high and low pressure refrigerant sides. And that is where the cold happens.

When high pressure switches to low pressure wonderful frostiness results. With that said, not all vehicles will have one. Some vehicle manufacturers decided to use a metering device known as the AC expansion valve.

In fact, the older your automobile, the more likely it will have an expansion valve instead of an orifice tube. The point to make here is you either have one or the other, you will not have both. We  dedicated an article to the expansion valve as well.

It can actually be more troublesome than the orifice assembly. This is because the expansion valve has a temperature sensing device and moving parts. As for the orifice it's a simple copper tube surrounded by two screens. Yes, I would rather have an orifice tube in my car air conditioning system. 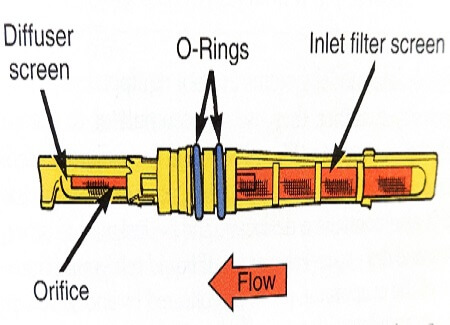 Since there’s no moving part this component would probably last forever without the need for service. Unfortunately, due to the small size of the hole and it being the only screen in the refrigerant system, it becomes an issue when internal degradation happens with age.

This is especially true on old automotive AC systems with failing internal components. Another reason we’re talking about this part first is, because the troublesome cars from the 90s and early 2000s most often use the orifice. A lot of these cars are still on the road and drivers want to get their air conditioning working again.

How the Orifice Tube Works

I remember when I went to a General Motors sponsored air conditioning class the instructor called the orifice the exact place where the cold happens as I mentioned above. This is something that stuck with me and is a good representation of what the part does.

On one side of the orifice tube is a high pressure refrigerant liquid. The brass hole of a predetermined size meters this refrigerant. The process leaves a low pressure liquid directly on the other side of the component. 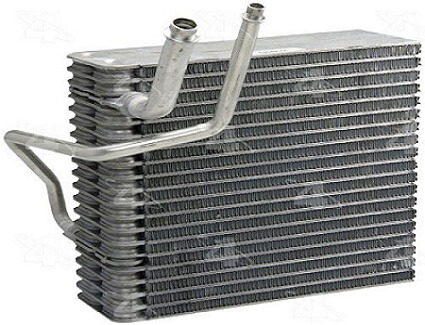 On the other side of the tiny hole is a low-pressure situation. And if you hold down on the trigger what happens?

The can gets cold. The longer you hold down the button the colder it gets. In a nutshell, that's how an orifice tube makes the air conditioning system cold. On the other side of the orifice the low pressure liquid flows into the evaporator core. This looks like a mini radiator with aluminum fins.

This device gets in the low 30 degree range. Ambient temperature air passes through the cabin air filter and through the cold aluminum evaporator fins. Then finally out into the interior cabin for people to enjoy. That's how an air conditioning system makes the inside of a car cold. And we owe a great deal of thanks to the hard work of the orifice tube.

How Does this Simple Plastic Part Fail

As I mentioned this part fails due to other problems internally in the automotive air conditioning system. In a perfect world this part would never need servicing.

But because of its construction it can become a blockage point and mess up the pressure balance of the system. Since the hole in the brass tube is small the manufacturer had to protect it by placing screens around it. There are no other filters or screens in a factory installed automotive system.

This means that any debris from damage to internal parts will collect around the orifice tube screens. When enough debris builds up the orifice will not meter the correct amount of Freon into the evaporator. Therefore, a malfunctioning orifice tube is a sign of a larger internal problem occurring.

Symptoms reported from the driver will often include an air conditioning system that cools when first turned on but quickly warms up as the vehicle continues operation.

When a mechanic installs a manifold gauge set and takes pressure readings they will often find an automotive air conditioning system with unusual pressure readings. The readings might be consistent with a blockage or a defective compressor.

A low pressure reading below specification and high pressure readings above what’s expected is a sign that this orifice tube needs a visual inspection. This means the system must be recovered and the part physically removed.

Service and Inspection of the Orifice Tube 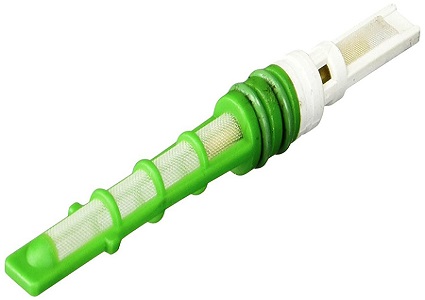 The Orifice tube mounts inside the high pressure air conditioning line. Obviously, if you're going to take an AC line off, you must remove and recover the Freon first. On General Motors vehicles the five inch long plastic and brass part is installed in the high pressure line after the condenser.

Sometimes it’s mounted in the condenser outlet. There are little crimp marks on the aluminum pressure line that can help you find exactly where it's located. This varies from model year and model. On other brand vehicles they can be just about anywhere in the high pressure side. Online parts manuals make quick work of finding the exact location on your specific model.

However, the component is usually not far away from the evaporator core on many models. The not so funny thing about removing this part is sometimes it's difficult. I've walked up to them and pulled it right out with a pair of needle nose pliers, without any problems. In other cases the plastic begins to crumble and it stays inside the high pressure line.

It’s so common to struggle with removal that tool makers came up with an inexpensive special tool to help get it out in one piece. You’re better off using the special tool right off the bat as going at it with a needle nose pliers can make the remover ineffective.

If you can't get it out you’ll have to replace that section of the line. This makes a $10 part much more expensive. On some vehicles a high pressure line can be a couple of hundred dollars. When you get the delicate air conditioning part out it should look like brand-new.

However, if you're reading this it will probably have metallic debris caked on the inlet screen area. Note that when replacing the part they are not all a standard size. Different model vehicles and manufacturers use different sizes. These replacements are often color-coded to prevent confusion.

What does a Clogged Tube Mean

In most cases when an orifice is clogged with metallic debris these little metal chips are parts from the internal workings of the compressor.

It is also possible that you will find nonmetallic deposits. This can happen when the desiccant bag in the receiver dryer ruptures.

Unfortunately, in any situation that the orifice tube is clogged with any kind of debris it’s a sign of a larger problem within the automotive air conditioning system. Mechanics that just change the orifice tube and put the vehicle back together aren't helping the customer or themselves.

In this scenario the air conditioning system will work great for a couple of days, maybe even a couple of weeks, but whatever clogged the orifice the first time will clog it again. There is another situation where repeat problems are common.

This is when a shop replaces an AC compressor and doesn't flush the entire air conditioning system with the specialized cleaner required.

This is another scenario where the air conditioner might work great for a couple of days, but eventually the little metal chips left behind from the poor service will collect in the new orifice.

To be fair, it takes a lot of work to flush an air conditioning system filled with metal chips. The reason is the system contains a light film of oil that the metal particles stick to. This is why the special automotive AC system flush contains a solvent.

Lazy shops that don't take the time to do it right will have a comeback or repeat complaint of the air conditioning not blowing cold air. Some of these repair centers will install an air conditioning system refrigerant filter that’s available through the aftermarket parts industry. I'm not a big fan of this because the part doesn't actually belong on the car, but it can prevent repeat failures of the orifice tube.