When the automotive AC expansion valve malfunctions the air-conditioning won't blow cold air. In fact, my auto shop teachers use to say, "It’s this part that makes the cold happen".

As we learned in the opening page for the car AC section of the fix my old ride.com website, it's the pressure change that makes the air cold.

To be more specific, turning a high-pressure Freon gas into a low pressure refrigerant liquid. It's the expansion valve that performs this important task.

Proper control of the amount of super cold Freon that enters the evaporator becomes extremely important to how well the system operates.

Here we'll talk about how to diagnose problems with this important air-conditioning component. In addition, we'll cover the difference between an automotive AC expansion valve and the orifice tube that does the same exact job.

Sidebar: either your car has one or the other, it will not have both. When the orifice tube came out on the market in the mid-80s many manufacturers decided to go with that part instead of an expansion valve. Nevertheless, some manufacturers have pledged loyalty to the valve, because of its ability to perform precision adjustments. 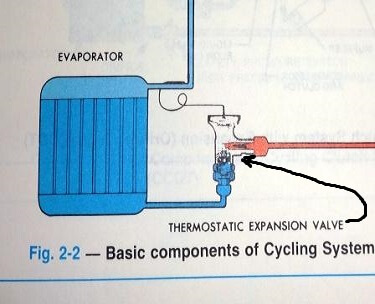 The definition of an orifice is a hole of a predetermined size. The orifice tube is a plastic part with a mesh screen on one side and a brass jet on the other.

Automotive designers calculate the size of the hole to meter the right amount of Freon into the evaporator.

I have a complete article on how the orifice tube works and how you can tell when it needs replacing. In the case of an automotive AC expansion valve we have moving parts.

The amount of Freon metered into the evaporator changes on the fly to maximize the coldest temperature possible without freezing.

A temperature sensor and a capillary tube filled with gas controls the device. When the evaporator starts freezing the gaseous pressure in the tube decreases and allows the expansion valve to close.

This is why some automotive manufacturers call this a thermostatic AC metering valve. As the evaporator warms up the gas pressure increases and opens the valve further.

Therefore, the difference between an orifice tube and an expansion valve is that one is a moving part and the other isn't. You find both of these devices on automobiles, because each one has their own advantages and disadvantages.

You can actually achieve a colder temperature with an expansion valve. However, any moving part fails more frequently than one that doesn't move. 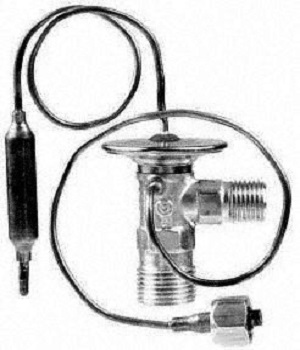 As mentioned above, these are precision and delicate moving parts. Any part that moves requires lubrication. In the automotive AC system all components receive lubrication from the oil charge that's added to the Freon.

When these older car air-conditioning systems develop Freon leaks the oil also leaks out. When technicians recharge the system to get the air blowing cold again, they seldom add additional oil.

As time goes on the automotive expansion valve can operate in a dry state and start sticking. In addition, to a lack of lubrication it doesn't take much debris to clog the valve itself.

Some manufacturers include a small screen to protect the passageway, but that can also become clogged. Therefore, on vehicles with high mileage an expansion valve malfunction starts to become a likely scenario.

In a situation where a compressor has been replaced because of internal damage, metal fragments can also destroy the expansion valve.

With that said, some vehicles experience problems with this air-conditioning component, even when everything is perfect. To my surprise, the Toyota 4 Runner and the mighty Toyota Corolla from the mid-90s through the mid-2000 years makes this list.

As mentioned above, when these valves go bad they often fail to move properly. When this happens, you'll often find the evaporator freezes up, because of the valves inability to adjust on the fly.

If you have a Toyota product with a frozen or ice covered evaporator, I can tell you right now, that you should seriously consider replacing this part.

However, there’s no reason to guess with a malfunctioning automotive AC expansion valve. Connecting a set of manifold gauges and obtaining pressure readings on the high and low side shows you pressure problems in the air-conditioning system.

With a completely filled system and a properly functioning compressor, we start looking for the expansion valve as the cause of incorrect pressure readings. There’s one more important thing to consider about diagnosing a defective AC expansion valve.

Some car owners love to install refrigerant stop leak products in an effort to seal slow Freon leaks. When used as directed, this isn’t a problem. Unfortunately, some do-it-yourself mechanics might think, if a little bit is good then more is even better.

This isn’t the case in an automotive AC system. Adding too much stop leak can push some into the expansion valve. Air-conditioning stop leak products are nothing more than a sticky glue like substance that can stop the valve from moving as intended.

How to Replace an AC Expansion Valve 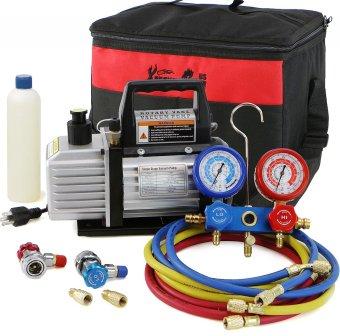 The degree of difficulty for replacing this Freon metering device varies greatly between year, makes and models. On some automobiles they mount the expansion valve on the firewall side of the heater case. This remains a convenient location, but we have one additional problem.

The capillary tube and temperature sensor runs down inside the HVAC case. It physically clips onto the heat exchanger fins of the evaporator core. This makes replacing the part difficult on many models. There's another thing to consider about replacing this automotive AC device.

The system requires evacuation, before and recharging after the procedure. In the old days this would rip the job out of the hands of the do-it-yourself minded car owner.

However, today they offer inexpensive air-conditioning tools that include a manifold gauge set and evacuation pump in one convenient package.

The kit offered here comes in at under $150. After you remove the Freon and then replace the part, it's important to pull a vacuum on the system to boil off any moisture and humidity existing inside the air-conditioning system.

You need 30 inches of mercury applied for more than 20 minutes to accomplish this. Failure to do so can cause blockages restricting the refrigerant flow when this moisture turns to ice.

If you're going to go through the trouble of replacing your own automotive AC expansion valve you might as well go for it and do it the right way the first time. This is not an operation you want to perform twice.