We find Ford ignition lock cylinder problems on many popular models. Unfortunately, these cars and trucks experience different malfunctions. Therefore, the most important thing this article provides is assistance in determining what's wrong with your automobile.

Ford cars like the Fusion, Focus and sport-utility vehicles like the Ford Escape, Explorer and Mazda Tribute built in the 2000 decade may experience starting problems. The symptoms of Ford ignition lock problems include a stuck lock that won’t move or turning the key and nothing happens. This can cause drivers to go on a wild goose chase.

Sometimes car owners and do-it-yourself mechanics start with replacing the car battery, starter and alternator for the wrong reasons. The cars I worked on had issues with the plastic linkage that connects the ignition key to the ignition switch on the other side of the column.

This means you're not pushing on the ignition switch quite as hard as you did when that cheap plastic linkage was new. In fact, sometimes you can push in on the key hard and wiggle it around and get the vehicle to start. This is important to note, because if this applies to your situation, you know for sure the ignition lock module requires diagnosis. 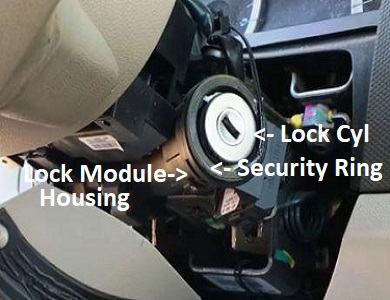 A lot of times when we see the word module, we're thinking about electronic components. But in this instance we're talking about a plastic casting of parts mashed together into a modularized component. This lock module assembly fits nine different models over a 10 year period.

With that said, problems can also develop in the lock cylinder assembly itself. And if that's not bad enough sometimes you just have a bad ignition switch. If you follow me all the way through this article I'll provide another possible and no cost route to a repaired vehicle.

Although I don't believe in this modification, the ingenious mechanics of the world have come up with a way temporarily repair the situation without the use of any parts. This modification to the ignition lock cylinder allows the key to travel a little further and therefore compensating for the worn out plastic linkage in the steering column.

Let's hit the Ford ignition lock cylinder problems first. When the lock cylinder fails completely it could mean towing your vehicle. Nevertheless, this issue represents the easiest repair with the lowest cost of replacement parts.

Before we talk about the parts and the repair procedure let's talk about the symptoms that occur when you're Ford ignition lock cylinder starts to fail. Drivers insert the key and find out that they cannot move it from the locked position.

When it first starts to go you’re able to wiggle the steering wheel and the key at the same time and often able to get it passed the locked position. This struggle to start the car should serve as a fair warning that problems with the cylinder are coming your way. Now, let's talk about what goes wrong with the old parts and the replacement procedure. 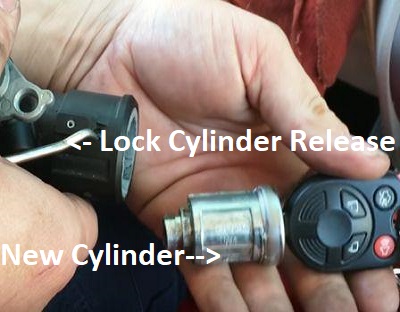 What's going wrong with the original lock cylinder is the failure of the tumblers to retract when we insert the key. Therefore, the steering column thinks, you have not inserted the key yet. This is why the jiggling and the rocking of the steering wheel can sometimes help.

The kit includes the tumblers, springs, lithium grease and an improved housing over the old design. They cover removing the lock cylinder from your specific year and model car on YouTube. Just type in your year and model followed by the words "lock cylinder repair and replacement".

Allow yourself at least an hour for the repairs and work slowly and carefully. Don't fight with the key on your Ford Focus, Escape or Mazda Tribute, because this project makes for a great DIY auto repair.

Unfortunately, the Ford ignition lock module is the most common failure on Ford Fusion, Focus and Escape sport utility vehicles. This is unfortunate because it takes a lot more work and the parts are not cheap.

We're going over the repair procedure and a few of the tricks that I've learned to deal with the security bolt that clamps the lock module onto the steering column assembly. But first let's talk about some of the common symptoms Ford drivers experience when this part begins to fail.

I have seen the progression of this problem in real time, as a good friend of mine drives a 2008 Ford Escape hybrid. At first they started to complain about an intermittent no crank problem. The driver told me if he held the key all the way to the crank position for a few seconds that it would eventually start to crank around. 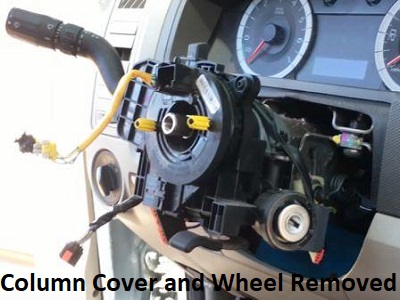 When I researched the problem I found out that the internal gears of this unusual linkage set up starts to wear out and cause this type of problem.

Although we'll get into a workaround at the very end of this article, to me the decision to replace the parts became clear. In this situation, my friend planned on handing down this vehicle to his college aged son. We wanted to make sure that this vehicle performed as expected for the young driver.

Therefore, we jumped in and purchased parts online, including the replacement security bolt. Once again YouTube provides an excellent video on how to replace the Ford ignition lock module. Pay special attention to the part in the video where they grind a slot into the security bolt and use a standard screwdriver to remove it.

More importantly, we purchased a new breakaway security bolt. The bolt costs seven dollars, but makes sure that the repairs last. You also wouldn’t want to make things easier for a car thief.

Here's the part that everybody struggles with the most. When you remove the old lock cylinder from the old module you have to install the key into the cylinder and move it to the accessory position. Now you can depress the lock tang through the hole provided and slide the cylinder out of its bore.

When reinstalling the cylinder it won't go in, because the new part is set at the factory to the off position. You need to reach in and move it clockwise one click. This puts the new lock module linkage in the accessory position just like your lock cylinder. And now the old cylinder slides right into the new part assembly.

Okay, we talked about two of the most common Ford ignition lock cylinder problems you'll find and now it's time to talk about a third possibility. Whenever I run into a Ford Escape that won't crank over, my first suspect is the ignition lock module.

How does this happen? When you push the key all the way, but the ignition switch barely closes, you can get an arcing across the contacts of the electrical switch. This arcing actually deteriorates and melts the contacts on the part. In this case you get a lot of the same symptoms, but it’s the switch that failed.

Here’s the good news. When you purchase the more expensive Ford ignition lock module assembly it comes with a new starter switch. I mention or call out the ignition starter switch separately, because the possibility for everything else to be fine and the switch to fail exists. 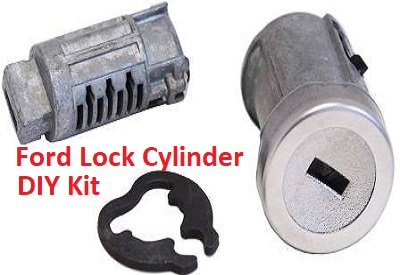 As we've discussed throughout this article, Ford drivers can experience a no start situation on their aging Ford Escape sport-utility vehicle and Fusion model cars. But what if I told you that there was a modification you can perform on the existing cylinder that would temporarily solve the issue.

Before we move on let me go on the record as saying I'm not a supporter of this procedure. I'll get into why at the end of this section. The Ford ignition lock cylinder modification is a simple matter of grinding away at the stop. The stop I'm talking about is when you push the key to engage the starter motor it only goes so far.

If it could go just a little further this vehicle would start even though the plastic linkage has developed a severe amount of play in the ignition module housing. This is often the root cause of the problem. With that said, removal of the lock cylinder and grinding away at the small casting is more difficult than replacing with new parts.

Therefore, I would only suggest going this route if there is no other choice due to financial reasons. The other reason I'm not a supporter include that this repair becomes a temporary situation. Eventually the cheap plastic linkage that's causing the no start problem wears out enough that replacement becomes the only option.

However, you do see people on the Internet saying that this repair can last for several months. In many situations, these cars get handed down to other family members and it wouldn't seem a good idea to hand them down a problem waiting to happen. In fact, when the problem does happen, they might require a tow truck.

If you want to see the modification you can watch them grind away at the Ford lock cylinder housing for yourself. There are two things that you should take special note of in the how-to video.

When removing the lock cylinder the key needs to be installed and moved to the accessory position so that the lock tank can be depressed. When you have everything in the right place the cylinder will slide right out. We filed this article in the miscellaneous car and truck problem section.

If you are a Ford car owner take a quick look at the next problem you might encounter. First, be aware the Ford Fusion door handle could break in your hand at any time. Also see why the Ford Focus engine mount probably won’t make it all the way through this vehicle’s life cycle. Please visit the fix my old ride homepage for more information.