The good news is a Chevy door jamb switch only cost about five dollars. The bad news is these defective door ajar switches can cause several different intermittent automotive electrical problems.

Let me give you an example. In many cases when the Chevy door jamb switch fails the center post breaks off.

This makes the automobile think the doors are open all the time. Not only will the dome lights stay on, but you also receive dash warning lights about driving around with the doors open.

However, as the switch begins to fail it can operate intermittently before it breaks completely. I've seen several Chevrolet and GMC trucks where the dome light would come on during the night and kill the battery.

For the drivers, they come out the next morning and the vehicle won’t start. Unfortunately, because of the intermittent nature of the problem this went on for months before we actually found out why the car battery died intermittently overnight. 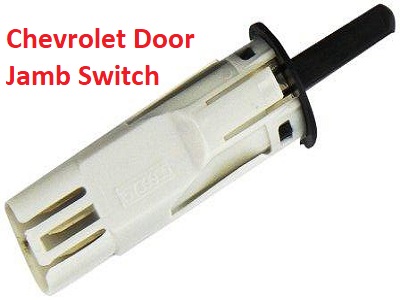 Door ajar switches have been around for so long. Unfortunately, the nearly bulletproof metal versions disappeared.

They started using plastic door jamb switches in the 1980s to lower manufacturing costs. It's important to verify your part represents an exact replacement.

You can do this by examining the electrical connector that plugs into the courtesy light switch. In most cases this flat three terminal connector has no key-ways and one safety latch.

The diameter of the switch and the mounting tabs also become important for verifying the correct replacement. On the older Chevrolet trucks you will often find a two wire connector.

In addition, the diameter can vary between the smaller S10 Chevrolet pickup trucks and the full size Silverado and sport-utility vehicles like the Tahoe and Suburban.

As I mentioned, automotive manufacturers used pin switches for a long time. However, on the new Chevrolet and GMC trucks they've actually done away with this component.

Now on the modern automobiles problems with the courtesy lights or even the power door locks require the replacement of the door latch assembly.

Although the five dollar pin switch mentioned in this article isn't exactly reliable, it’s easier to replace and less expensive than these integrated door latches commonly found on today's automobiles.

Chevrolet dome light problems remain another common complaint among drivers of these automobiles. One thing to consider is the dome light override button located on the bottom left of the standard headlight switch.

However, that article focuses on problems with the instrument cluster backlight. Long story short, the headlight switches on these trucks aren’t reliable.

In addition to dome light problems, many Silverado pickup truck models have an exterior courtesy light that focuses light on the cargo bed area of the pickup truck.

Drivers control the options to illuminate this light automatically when the driver side door opens. Problems with the override function of the headlight switch and a defective Chevy door jamb switch can both cause issues with the cargo bed light on these trucks.

Fortunately, testing procedures for both the courtesy light pin switch and the override function remain straightforward. We will cover testing of both of these components in the next section. 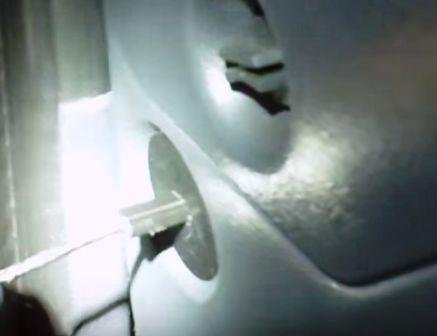 The one thing to make completely clear about diagnosing Chevy door jamb switch issues is the courtesy circuit remains protected by at least one fuse. On some year and models they use two separate courtesy lamp fuses.

And remember, when we say the word courtesy lamp, we include the dome light in this lighting package. In many cases when you have a defective courtesy light or door ajar switch the plastic breaks or crumbles. In this situation there’s no reason to perform automotive electrical diagnosis.

In other words, if you slam this door hard enough you can break the door jamb switch. With that said, the question becomes how to test the switch to verify that it remains the root cause of the problem.

Fortunately, this part remains a simple open or closed position type electrical component. The factory spring loads the switch to close the contacts when the door is physically open.

This completes the circuit and illuminates the door ajar light on the instrument cluster. In other words, the switch is naturally closed. When you close the driver side door the pin switch contacts push open. This opens the circuit and tells the automobile that the door is properly closed and ready for travel. 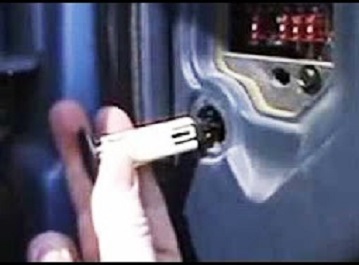 Replacing the Chevrolet courtesy light switch makes for a good DIY car repair. The degree of difficulty can, however vary between vehicle year, makes and models.

Since the driver side door is the one most often affected, let's discuss a few strategic tips you can use when replacing the door ajar switch on your Chevy truck.

On many General Motors trucks they locate the driver side pin switch close to the fuse panel. On the larger trucks and sport-utility vehicles you can often remove the driver side kick panel and reach your hand up inside to disconnect the electrical connector.

However, on some models you might have to remove or take loose the fuse panel and gain access that way. Finally, on some of the newer trucks, even this procedure can be difficult.

On these models it's possible to remove the defroster vent on the side of the dash panel. This plastic part actually supplies air to the defroster grid at the top of the driver side door panel.

Another thing to consider when replacing the Chevy door jamb switch is that some models include enough slack in the three wire electrical harness.

This means all you have to do is pop out the old switch and you'll have enough slack to reconnect the new component to the vehicle side harness.

Fortunately, there are a few good videos that show you how to replace the Chevrolet door switch in less than five minutes.

Chevrolet trucks can last for a long time. Unfortunately, these vehicles are known for a wide variety of common problems as they get older.

If you have an aging Chevy truck, you might want to check out a common problem with the ignition lock cylinder and switch. Of course, if you own a Chevrolet Silverado you've already replaced the daytime running lights several times.

And if you have a pickup truck you need to see how to replace the tailgate hinges. Stop by the fix my old ride homepage to see what else we cover.